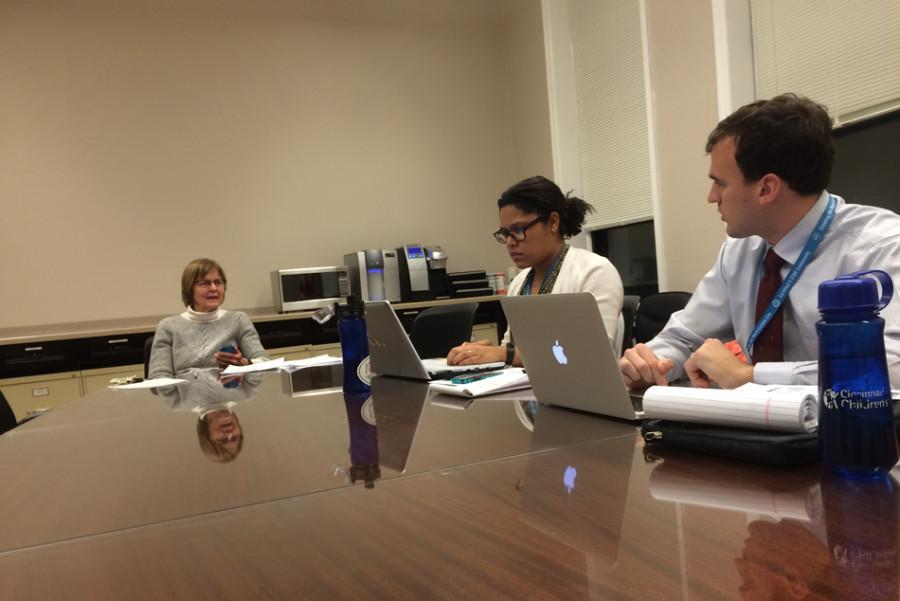 In the Civic Center, Tisdahl dictated responses to two city officials, who answered around 20 pre-submitted and live questions through the account @EvanstonMayor.

In response to a question about what Evanston is doing to fight Gov. Bruce Rauner’s funding cuts for local governments and social services, Tisdahl said the city is lobbying state representatives to find a different solution.

“I will do my best to encourage the legislator to balance the budget by reinstating the income tax or finding cuts that don’t impact the most vulnerable citizens,” the response tweet read.

“The poverty rate in #Evanston is going up but unemployment going down. Hopefully that will decrease poverty rate,” the tweet read in response to a question about the city’s homeless population.

Twitter users also asked more specific questions about public works issues such as “excessive parking requirements” and a proposal for a bike path in north Evanston. Responding to a question about an icy street, the team tagged the public works department’s Twitter account to pass along the message.

“That’s kind of cool, you can actually resolve problems during this,” Tisdahl said during the meeting.

Tisdahl created the Twitter account at the beginning of February when two fake accounts under Tisdahl’s name began receiving tweets from officials in other cities.

Evanston officials also introduced the idea of creating @EvanstonMayor so Tisdahl could promote the city’s campaign to become a finalist for the World Wildlife Fund’s Earth Hour City Challenge, city manager Wally Bobkiewicz told The Daily before the meeting.

On Wednesday afternoon Tisdahl’s account varied from its usual promotion of the competition with a tweet criticizing the depiction of Evanston in an episode of “The Good Wife” that aired Sunday on CBS. The show depicted Evanston as conservative, according to a tweet from Tisdahl.

“@GoodWifeWriters #Evanston is not the conservative place ref. in Sunday episode. We welcome all, even uninformed TV writers #TheGoodWife,” Tisdahl’s tweet read.

“Perhaps she’s found a medium that really suits her,” he said.

Without Twitter as an outlet she wouldn’t have been able to reach the right people with her opinion on the episode, Tisdahl said.

“I would have vented and yelled and screamed or something, but I wouldn’t have done anything that was productive,” Tisdahl told The Daily.

As for the technical side of Twitter, Tisdahl said she doesn’t understand the technology any more than she did during the first Twitter town hall meeting in 2012 when city officials responded to questions through the city’s Twitter account, @CityofEvanston. At one point on Thursday, Agnew explained to Tisdahl the different functions of the “@” symbol and the hashtag.

But using Twitter as a platform for town hall meetings allows her to respond to many more questions in one hour than two hours in person, Tisdahl said, adding that she reaches a different demographic online.

“Twitter reaches a younger group of people that I don’t reach otherwise,” Tisdahl told The Daily. “I think that’s important, so I’m trying.”