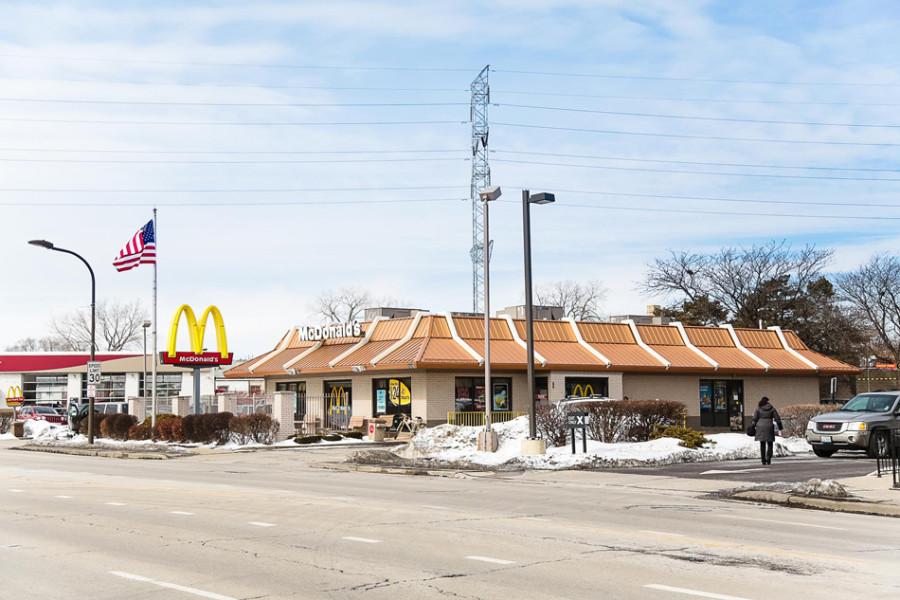 McDonald’s, pictured here at 1919 Dempster St., employs people at the minimum wage. Recent efforts on a statewide and Chicago level to raise the minimum wage have raised questions of a possible wage hike among some Evanston residents.

Elliot Zashin, a retired Evanston resident and former job coach at Interfaith Action of Evanston, has been working on gathering information about low-wage employment in Evanston since the fall of 2013.

After deciding to tackle low-wage employment, Zashin, along with members of Lake Street Church of Evanston, other congregations, local organizations and IIRON, an organizing network in the Chicago area, petitioned in front of stores, interviewed minimum wage workers and held workshops.

Since this past fall, they have been meeting with City Council members to talk about their perspectives on the matter. They have met with all but two aldermen so far.

“Our goal is to collect enough information so that the community and members of the council will realize that this is not a trivial or a minor thing in Evanston,” Zashin said. “Evanston does have a lot of low-wage employment and we think that the community ought to address that … We don’t think this is something to ignore.”

Efforts in Illinois municipalities and the state General Assembly this year have raised questions about what will happen to the minimum wage locally and statewide.

A referendum on the Illinois ballot in the November midterm elections recommended that Illinois raise the minimum wage from $8.25 to $10 by 2015. The nonbinding advisory was passed by about two-thirds of Illinois voters.

Although the Illinois Senate passed a bill in February that would raise the state minimum wage to $11 an hour by 2019, a different minimum wage bill has already stalled in the House of Representatives due to the end of the legislative session this January.

In addition, in his first State of the State address on Feb. 4, Gov. Bruce Rauner proposed raising it to $10 over the next seven years.

City staff in Evanston have not yet considered how to deal with a potential local increase in the minimum wage.

“It’s better for Evanston I think if it’s done statewide or nationwide,” Evanston Mayor Elizabeth Tisdahl said. “But if its stalls there, then I’m sure we will address it at some point.”

State Rep. Robyn Gabel (D-Evanston) supports a minimum wage hike. She noted that the minimum wage is lower now in real dollars than it was in the 1970s, and has not kept up with inflation.

“For minimum wage workers, any increase in their salary is money that immediately goes back to the economy,” she said. “I think it is a great way to grow the economy, by giving low-income folks a little bit more money.”

The Chicago City Council and Mayor Rahm Emanuel approved a plan on Dec. 2 to raise the minimum wage to $13 per hour by 2019. Although Chicago chose to address the issue locally, it is unlikely that Evanston will follow suit soon.

Tisdahl said she thinks an increase in minimum wage would have a huge impact on low-wage employment workers, but could be unfair for Evanston’s businesses. If Evanston were to raise the minimum wage, business owners could decide to move to surrounding municipalities.

Many Chicago activists believe $13 per hour by 2019 is still too little.

Ed Shurna, the executive director of Chicago Coalition for the Homeless, said the raise is not high enough to make a living.

The coalition has pushed for a statewide minimum wage hike for years, and Shurna said the bill would not have passed in Chicago without activists. In order for any such legislation to pass in Evanston, he said groups must advocate for it.

Thousands of workers are involved in Fight for $15 to demand higher wages from corporations. Adriana Alvarez, a crew member at a McDonald’s in Chicago, said she did not get a raise for two years, and when she did, it was 10 cents.

Alvarez, who is a single mom, said she cannot wait for four years for the complete raise in the minimum wage, and said she needs a wage of $15 per hour now.

Evanston Ald. Jane Grover (7th) liked Chicago’s decision and said it makes it easier for neighboring municipalities to do the same. Grover met with Zashin and others recently for a discussion on income inequality in Evanston and what role municipalities can play in lessening its effects.

Evanston’s unemployment rate sits low at 4.2 percent compared to the state’s rate of 5.7 percent. Grover said she would not want to leave more people unemployed as an unintended side effect of a minimum wage increase.

“There was worry about very localized backlash,” Grover said. “We wouldn’t want it to harm people who are already employed or employers.”

As of Jan. 13, the city government employs three minimum wage workers, all under the age of 20, said Jennifer Lin, the city’s human resources division manager, in an email to The Daily. However, during the summer, the city hires more and had about 70 minimum wage workers last summer. City staff are anticipating a similar number this summer, Lin said.

But for Zashin, minimum wage workers in Evanston that are not employed by the city end up going unnoticed.

Zashin and other community members have not decided what steps they will take next, he said. Whether they will draft an ordinance, present a report or take other steps, Zashin said they are not ready to make those decisions.

Tisdahl said if the new minimum wage bill stalls again in the House, which had its first reading of the bill on Feb. 9, Evanston staff could decide to address the issue in some way.

“I don’t want our prices to go up in comparison to surrounding communities,” she said. “But I do want everybody, including our people, to be paid enough when they work a full-time job to be able to live. You should not be homeless and working full-time.”