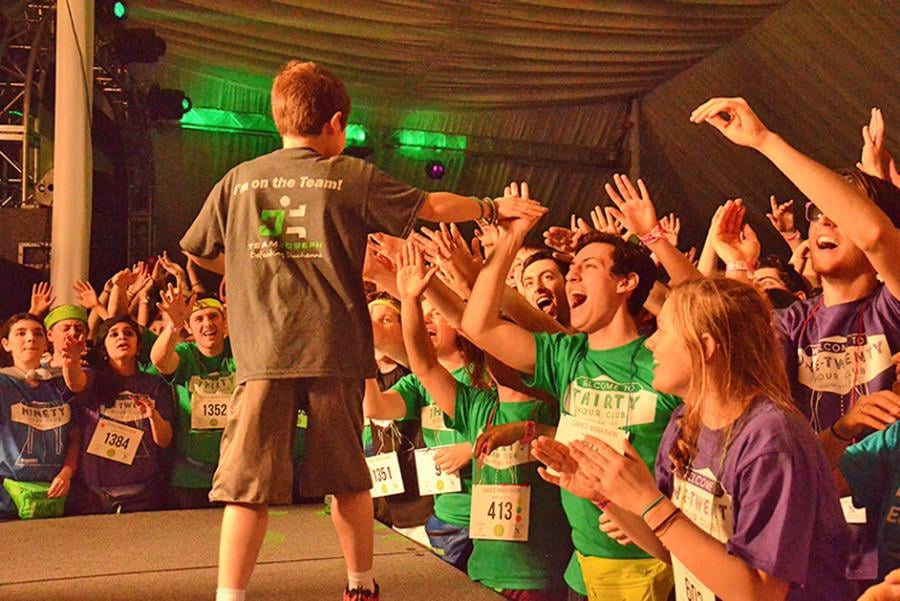 Students celebrate during Dance Marathon 2014. After a letter to the editor was published in The Daily in April 2014 criticizing a lack of inclusivity in DM, the organization has implemented new initiatives, like gender-open changing rooms.

Almost a year after 27 students signed a letter to the editor calling on Dance Marathon to be more inclusive, the 30-hour culminating event kicks off Friday evening with gender-open changing rooms and students participating through a “financial buddy system.”

The letter, which The Daily published in April 2014, accused DM of privileging students “with racial and socio-economic advantages on campus, thereby leaving fewer opportunities for socially, socio-economically and racially underprivileged students to participate or lead.”

“NUDM has not yet earned campus-wide support,” the letter stated. “We can say this confidently as leaders of multicultural, service, philanthropy, social justice and other campus organizations who regularly hear of members of our communities feeling marginalized by NUDM’s practices and its unearned reputation as a campus-wide tradition.”

David Ryan, one of DM’s executive co-chairs, said the organization has started to address the problems presented in the letter.

“We really worked hard this year to evaluate the different areas where we can reduce or eliminate barriers that would prevent any individual student from participating,” Ryan said.

One new approach DM has used this year has been its “financial buddy system.” The system pairs older students who have done DM with newer students concerned with meeting DM’s $400 fundraising minimum, Ryan said.

“We’ve heard some great individual stories about dancers who have met and become great friends through the financial buddy system,” he said. “It’s a first-year program, so we’re looking forward to building on it next year and in future years.”

Ryan said the event will include gender-open bathrooms and changing rooms, a new addition from last year. Ryan also said DM is working, as it does every year, to accommodate dancers’ medical and dietary needs.

SESP sophomore Matt Herndon, who sits on ASG’s accessibility and inclusion committee and chaired its subcommittee on socioeconomic status before it was dissolved, said members from DM met with the committee last spring after the letter was published.

Herndon is also a member of Relay for Life, whose co-chairs signed the letter. He said DM has become more inclusive since the letter, but addressing the full scope of the problems takes time.

“I think they’re making strides,” he said, “but I do think it’ll take a long-term commitment to make this even more inclusive. It’ll take people who aren’t at Northwestern yet to change some of these things. It’s something we’re going to have to work on for years to come.”