The Sideline: Arvid Swan takes coaching well beyond the court 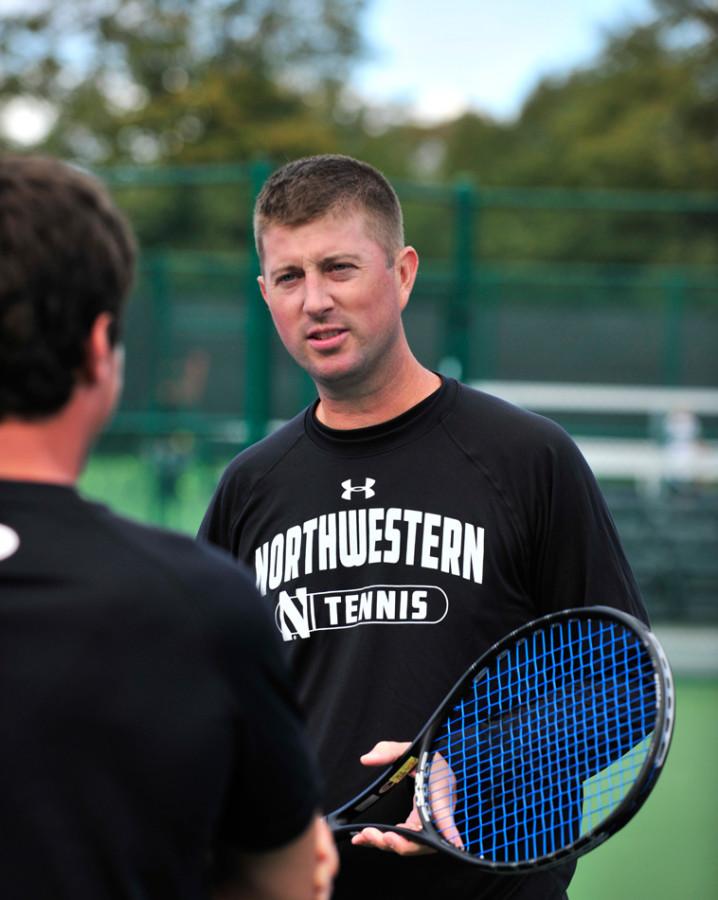 It makes sense. Ever since the former Michigan standout took NU’s men’s tennis head-coaching job in 2007, he has been all about the Wildcats program.

The eighth-year coach currently has a 112-91 record, but has been 51-26 in the past two-and-a-half years. In 2014, Swan was named the ITA Midwest Region Coach of the Year after leading the team to its third consecutive NCAA tournament berth.

Even so, the coach says he doesn’t like things to be about him. He said he wants all the attention to focus on the team.

He rarely barks orders in practice, leaving associate coach Chris Klingemann to shout unfinished yet menacing threats such as, “If I catch you walking in that hallway…!”

Swan seems to prefer to walk up to his players and provide them with nuggets of insight. Those who know Swan best say he has a “dry” sense of humor, the kind that takes some getting used to. Swan is rarely the center of attention because he likes to defer to others. But he has been the central figure in the resurgence of the NU program.

A series of plaques listing the Cats’ Big Ten Championship seasons loom over the six courts of the Combe Tennis Center. Compared to the women’s tennis team’s 14 championships, the men’s nine look paltry.

It is also a reminder: It has been a long time since the glory years of NU men’s tennis. There are even three empty slots waiting to have championship glory etched onto their purple surfaces. The team hasn’t had a prolonged stretch of dominance since Harry Truman was president, and it last stood atop the conference in 1990, when Swan was only 15 years old.

Before Swan’s tenure as coach, NU was a respected team but never really in the running for a championship berth. The year before Swan’s arrival, the Cats had just finished a 10-14 season and only made it to the quarterfinals of Big Tens.

In his first season, Swan pulled together the 12th-ranked recruiting class in the nation, igniting a new era for the team. The men’s squad was no pushover, but Swan had bigger aspirations.

“My goal is, we keep trying to work towards being a championship-level team,” Swan said. “And once you do that once, you want to be consistently there. (Women’s tennis coach) Claire Pollard has been consistently there for 16 years, so that’s what we’re working towards as a team.”

This season, Swan finally has the squad in position to make the leap as an elite program. NU sits at No. 20 in the national rankings thanks to inspired play against one of the toughest schedules in the country.

“This is the best team we’ve had since I’ve been here,” Klingemann said. “Now we finally have the horses to go and do what we’re trying to do.”

But Swan always looks to improve. He has plans written up for each of his players about what they need to practice and is constantly pulling players aside during practices and games to give them a couple more pointers.

“That’s the focus, getting better and better each match,” Swan said. “Our schedule has never been harder, never been more challenging. I think the guys are up for it, just, ‘Hey, today I’ve got to get better.’ Then hopefully by the end we’re there.”

Swan said he rarely looks past the day-to-day grind of the team because all he can control is how much the squad improves that day. That kind of drive flies in the face of history saying NU’s years of dominance are long gone. Swan doesn’t have time to reflect on history. He’s too busy making it.

Swan’s favorite on-court memories from his tenure are not the singular triumphs of his team, but rather the journeys of the players that caused them.

“We’re trying to win in the moment, but as you look back you kind of say, ‘Okay, this guy went from where he was as a freshman to where he was as a senior from a tennis, a maturity, an academic perspective,’” he said. “I’m not going to look back and say, ‘Hey, that match, we really did well in that match,’ but I remember who played that match or who went from a certain level of player to a completely different level.”

Coaches in all sports talk about their “process,” a set of guidelines that will lead a player to long-term success if adhered to through adversity. For Swan, that process centers on his players’ unmatched passion for practice.

“We expect everybody to work really hard on a daily basis,” he said. “Tennis is kind of a grind-it-out sport, you’ve got to be able to do it day-in and day-out. You can’t have bad practices.”

Swan makes sure that his team practices 20 hours a week, the maximum amount allowed by the NCAA, and ensures the time is used to the fullest.

That focus on hard work mirrors Swan’s personal approach to his game from his days as a player.

“I put in a lot of time on the court, I put a lot of time out in terms of conditioning,” he said. “I wasn’t the most physically-gifted as an athlete so it was important that I do all the little things to get better as a player, so the one thing I think I bring is that kind of approach to my program.”

On the player development front, Swan’s methods unquestionably get results. His mindset has pushed former athletes like Spencer Wolf and Raleigh Smith and current sophomore Sam Shropshire to grow into first-team All-Big Ten performers and maximized the potential of countless other charges.

“Compared to some of my peers in high school, I feel like I improved a lot more in college compared to a lot of people,” Smith said. “Obviously Arvid is a big part of that.”

Senior Alberto Zanotti, who is in his fourth year under Swan’s tutelage, agrees.

“He has a lot of knowledge in the tennis world,” Zanotti said. “The whole sphere of logistics, he knows how to take care of all of his guys.”

Being able to point to his developmental credentials has only helped Swan on the recruiting trail, where the Cats have posted top-25 recruiting classes in his tenure. But credibility with more talented high school athletes hasn’t changed his commitment to success through hard work.

“We recruit certain types of kids. We want kids that, No. 1, love the sport and want to get better,” he said. “For us it’s finding that right fit of somebody who wants to be pushed, who wants to have hard practices, wants to have coaches who are on them a lot.”

Swan’s work on the sideline doesn’t stop when the lights drop in the Combe Tennis Center and his players set their rackets down for schoolbooks. In fact, that’s when the real work begins.

“These guys are here and their parents aren’t, so Chris and I have to be willing to help them in any way that they need,” Swan said. “Making sure that we’re taking care of academic requirements, that we’re helpful in ways outside of tennis and academics and that we’re available 24 hours a day and seven days a week.”

For every moment the players spend on the court, there are countless more where tennis takes a back seat. The team has only nine active members on its roster on any given year, so Swan is able to give each player a lot of individual attention and enter into a personal mentorship role. Swan calls himself a sounding board, an advice-giver and an accountability director.

His efforts to make himself available for his players outside of the sport doesn’t go unnoticed with his team. Zanotti calls Swan an expert who “wears a lot of masks.”

“Whenever I get injured or need help academically, he’s always there to help,” sophomore Strong Kirchheimer said. “With the upperclassmen he helps them get internships and look for jobs when they get out of here.”

The same commitment to hard work that maximizes the tennis talent of his charges is also a crucial tool for developing players outside the lines.

“In practice they’re always facing adversity and in the matches they’re facing adversity,” Klingemann said. “They learn how to deal with it so when they hit the real world, whether that’s professional tennis or a job, they’ve already gone through all the adversity.”

Swan doesn’t stop teaching his players once they graduate.

Smith, who graduated last year, still speaks with Swan almost every day as he tries to break into the professional tennis scene.

“He was always good about making recommendations and making calls and helping people out,” Smith said.

Swan takes great joy in developing his players off the court, and said keeping connections with his former players is probably the most satisfying part of his job.

Klingemann says that Swan’s intense approach to preparation is a manifestation of the care he has for his players and program.

“He always wants what’s best for his players or even just what’s best for me and what’s best for other people around him,” Klingemann said. “That shows in helping the guys on the team with jobs and really any situation they’re in outside the tennis court.”

Swan knows there are two sides to his job, and he takes both parts seriously.

“I don’t just look at this as, you know, I’m the tennis coach really,” he said. “I’m in charge of nine guys’ lives for four years, so that’s a pretty significant responsibility.”

It’s not explicitly in his job description, but Swan seems to take as much pride from building great people as he does from anything tennis can provide. For him, coaching is about more than the match at hand.