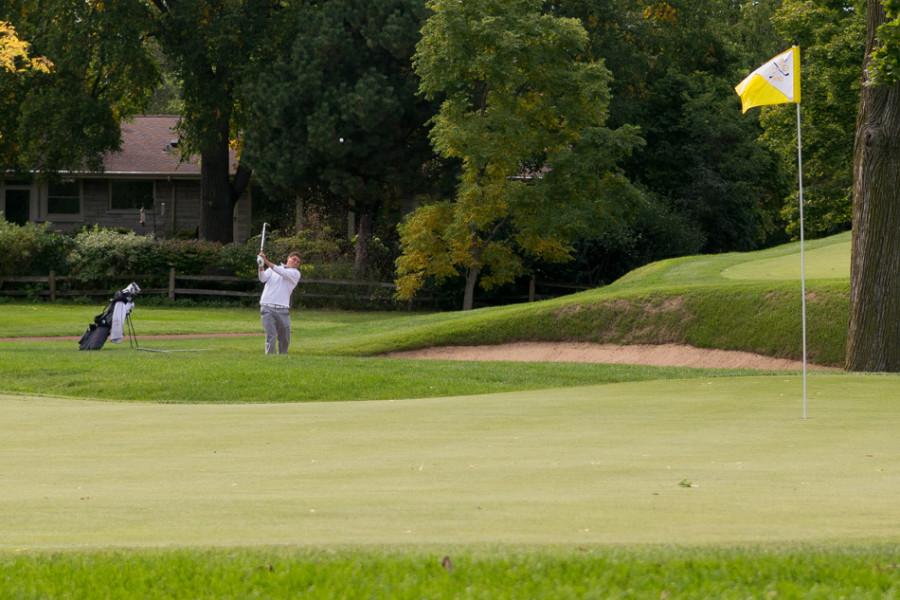 Bennett Lavin blasts one out from the fairway bunker. The senior was a steady No. 3 in the lineup during the fall season.

It’s barely March, but Northwestern has already put its season on the brink.

The Wildcats entered the Louisiana Classics on Monday hoping to challenge No. 1 Illinois for the tournament crown and instead found themselves in the caboose, placing last in a field of 14 teams at Oakburne Country Club.

The jarring result had coach David Inglis failing to find an explanation in the aftermath and stating that the event would have big implications going forward.

“I’m not sure quite sure I know what happened,” he said. “On Monday, we weren’t ready to compete, and it’s really going to cost us … We’ve got to dust ourselves off and figure out what went wrong. This is going to be the turning point of the season.”

That could be an early declaration, but the Monday (and tournament) woes were that bad.

NU completed its first 36 holes of the tournament on Monday in 15-over-par, only good enough for 13th place with one round and one day to go. This came against a field where the Cats would’ve been considered one of the top teams coming in, based on its No. 58 national rank — third highest in the field.

But the team fell wildly short of that expectation on day one. Four of the five players were over par in the first round, despite facing an accessible course, and the same was the case in the second 18 holes on Monday.

The birdies that had been so abundant just a week ago at the Jones Invitational were scarce in Lafayette, Louisiana.

While the Cats only compiled three scores worse than bogey, their 22 red numbers in 36 holes seriously paled to the more than 50 they put on the board in 54 holes last week in Valencia.

The first day offered poor weather conditions for the Cats, but Inglis felt NU had plenty of opportunities for birdies that the team missed.

“Out of the gate we were a little bit scared and a little bit tentative,” Inglis said. “We were allowed to lift and clean our balls, and with soft greens, it was a great opportunity to make a lot of birdies. And I just don’t think we were in a mindset to rise to the challenge. We just weren’t tough enough.”

The second day (and final round) were not much better, as NU produced just seven birdies in dropping down to last place.

The poor showing will likely mar NU’s ranking severely, pushing it well down the chart in attempts to qualify for NCAA Regionals.

No single player appeared to compete to his standard over these two days. For the back of the line-up, the bottom didn’t fall out, but with all three finishing T50 or worse, the effort wasn’t exactly inspiring. Junior Josh Jamieson and freshman Dylan Wu have generally been the team’s best two players for the last number of events, but respective finishes of T37 and T54 spoke to a weak one-two punch.

Wu wasn’t fretting, though, that the struggles at the top would be a long-term issue.

“Josh and I are the most competitive players on the team,” Wu said. “I think we just work on each other’s games and get them better by competing against each other in practice, just trying to pick up that competitive spirit for all of those tournaments during practice.”

“The good thing is that this will make us practice harder and being conscious of practicing and trying to make improvements every day,” Wang said. “We can win conference and still make it to Regionals by the end of the season.”

If this is the turning point of NU’s season, that positive mindset is what Inglis is hoping to keep in spades.

The Cats have three weeks off before their next tournament in The Goodwin at Palo Alto, California.

Inglis said any major rankings points lost this week could all be won back at The Goodwin, which boasts a strong and deep field, and thus offers several enticing opportunities to beat quality opponents.

In the meantime, NU doesn’t anticipate wallowing in the poor result. It’s right back to the grind.

“This mindset makes you refocus on what you need to work on,” Wu said. “We’re a bit deflated right now, but after some time passes, I don’t think this will be on our minds at all.”