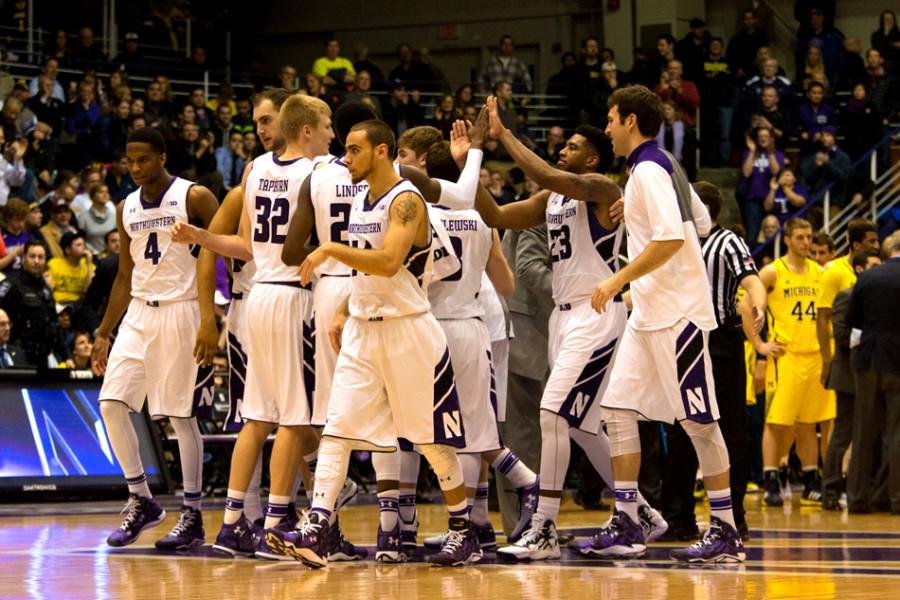 JerShon Cobb (23) celebrates with his teammates. The senior guard surprised his coach with 14 points and eight rebounds in the final game of his career at Welsh-Ryan Arena.

Guard Tre Demps and center Alex Olah, a pair of juniors, commanded the spotlight Tuesday night in Northwestern’s double overtime win over Michigan, and rightfully so, but the Wildcats could not have won without JerShon Cobb.

“JerShon hit some big baskets,” coach Chris Collins said. “His veteran leadership on the floor I thought was key.”

The senior guard was at the top of his class and game in the victory, scoring 14 points, dishing two assists and pulling down eight rebounds in his final contest at Welsh-Ryan Arena. Cobb was vital in helping NU pull off a furious comeback at the end of regulation. Without him, Demps would not have had the opportunity to tie the game on a 3.

With 1:23 left in the second half, Cobb hit a 3 in transition to cut the Cats’ deficit to 1. Michigan retaliated with a bucket, but Cobb got an offensive rebound and made a put-back on NU’s next possession to bring his team back within 1.

He also had the defensive board that set up Demps’ first game-tying stroke.

Cobb played a total of 33 minutes in his first game back from injury since Feb. 7 against Wisconsin. The 14 points is his highest mark in conference play this season.

The other seniors, guard Dave Sobolewski and forward Jeremiah Kreisberg, also played their final game on their home court, albeit with greatly diminished flair. Sobolewski had no points, two assists and attempted just one shot in 27 minutes played, but Collins praised him for running the offense in place of freshman guard Bryant McIntosh, who Collins said was limited due to illness.

Kreisberg, meanwhile, went quietly. He relieved Olah six minutes into the first half, but his three minutes of playing time coincided with a 9-0 Wolverines run. Kreisberg didn’t make a visit to the scorer’s table for the remainder of the game.

The Cats have been a team dominated by juniors and freshmen this season, but Cobb walked off the court leaving a positive legacy for the class of 2015. He was all smiles after the game, but seemed serious about prolonging his college career as long as possible.

“I just wanted to win,” Cobb said, “not just because it was my last home game but because we have a chance to play in the postseason. We needed this win.”