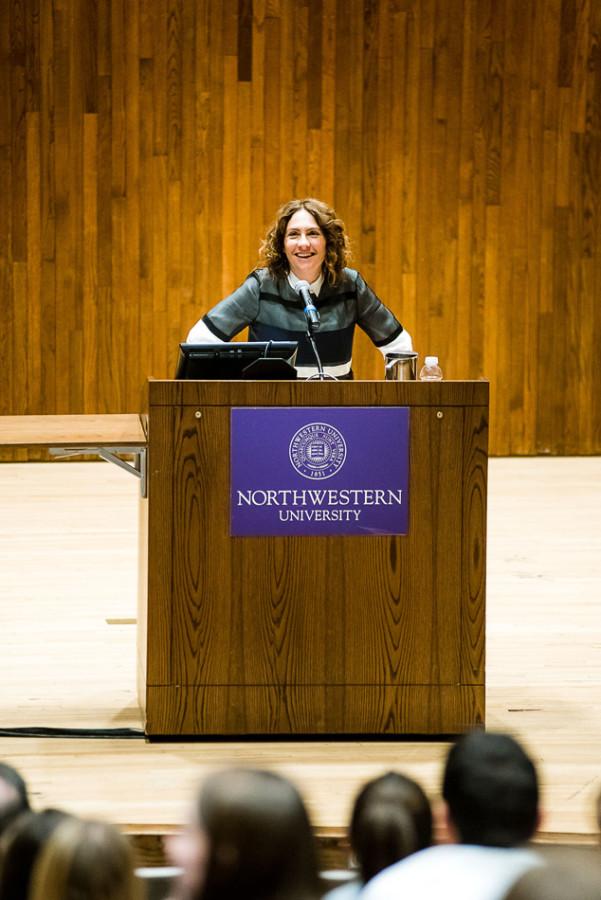 Golden Globe winner and creator of Amazon’s show “Transparent” Jill Soloway speaks to the Northwestern community about her experience as a female filmmaker. She discussed the challenges filmmakers from minority groups face, sharing advice about pursuing career as a filmmaker.

Jill Soloway, a Golden Globe winner and creator of Amazon’s show “Transparent,” spoke Monday at Northwestern about her experience as a female filmmaker and the experience of filmmakers from historically underrepresented social groups.

“We try to bring speakers who have something to say about issues that affect students right now,” Joe Eichenbaum, a Weinberg senior and chairman of the series, told The Daily. “There has been a lot of interesting discussions about identity on campus, so Jill Soloway seemed like a great fit.”

As she began her speech, Soloway said she wanted to tell the audience about the truth about her experience as a producer, whose responsibility entails the search for directors for television shows. She said she is currently looking for writers and directors who identify themselves as female, queer or people of color.

“Diversity is something that I deal with as a producer because there are so many white cis males who are ready to take those jobs,” Soloway said.

Soloway said she thinks about how to bring to the industry people who are not white, male and cisgender, who she said dominate film.

“I realized recently that protagonism is privilege, and portrayals of male protagonism are perpetuators of privilege propaganda,” Soloway said. “All art is propaganda for the self.”

Soloway said those who identify as female, queer or people of color lack the opportunity to be protagonists in television shows, and the film industry should allow these groups the chance to write narratives representative of their lives.

She added that filmmakers whose influence has been marginalized should begin or continue producing their work and confronting challenges that lie ahead.

Despite the difficulties people in minority groups face in film industry, opportunities are increasing due to the expansion of distribution channels, Soloway said.

“Social media allows and encourages people to have a voice and share their voices,” Soloway said. “I hope that you will allow each other to be the subject, to be the protagonist and to have a privilege.”

The speech was followed by a Q&A session. Soloway answered questions from the audience and elaborated on her points mentioned in the speech.

“I thought Jill Soloway was a great speaker, and she made me think about the ‘otherness’ of people who aren’t white, cis male in Hollywood,” Communication sophomore Caroline Kelly said. “She gave me the message that I need to remember to make my own art to overcome challenges.”

Communication sophomore Samantha Rose, a member of CTSS and an organizer of the event, said Soloway’s unique vision and experience as a leader in the film industry motivated her and other members of the series to invite her to NU.

“I hope that people can see similarities and apply some of the ideas that she presents to their own experience at Northwestern,” Rose said.