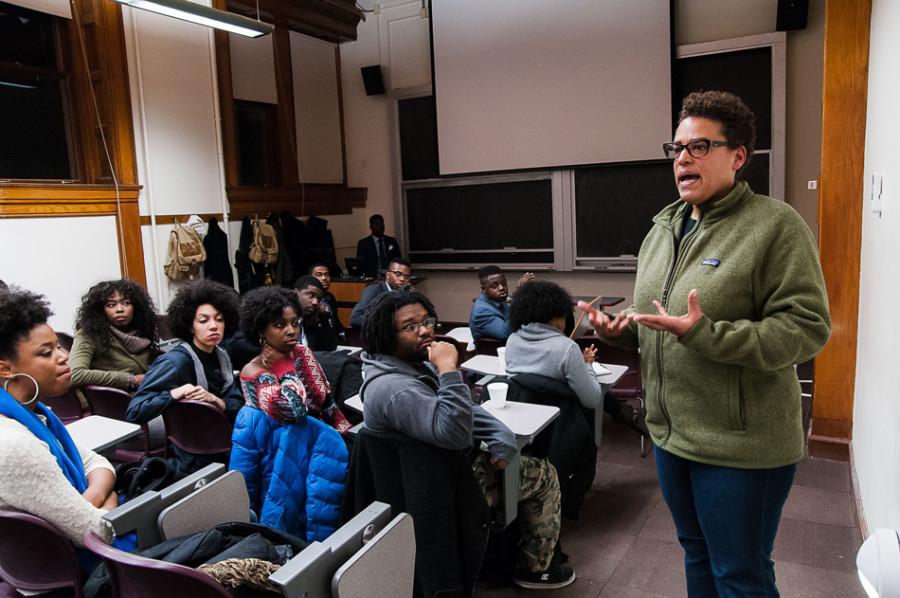 Alpha Phi Alpha hosted a discussion Monday on the misappropriation of black culture, touching on topics from slang to hair to Iggy Azalea.

The discussion, which more than 30 people attended, focused on how other cultures, particularly mainstream white culture, appropriate black culture, and when the act is and isn’t acceptable. African American Studies Prof. Michelle Wright moderated the discussion, which was held in Lunt Hall.

Wright asked attendees for their “most egregious examples” of misappropriation. Responses included the appropriation of black slang, some of which, Wright noted, has moved into standard American English over the last 100 years.

“African Americans are relatively unique in the world in that so much of our language has fed into the mainstream, and has been doing so for over a century,” she said. “So there are now a lot of terms that are viewed as white.”

Another response was the misappropriation of black music in mainstream white culture, specifically with Australian rapper Iggy Azalea’s recent success. Many attendees said Azalea, who is white, misappropriates black music, with some pointing to her refusal to acknowledge hip hop’s roots.

“There have been black women who do what Iggy Azalea is doing now and they’ve been doing it for 30 years,” Weinberg freshman Joy Holden said. “She knows nothing about this culture and the roots under it.”

Wright also discussed a series of hypothetical situations that focused on an element of black culture — such as a style of dance or music — and asked attendees who has the right to decide what should and shouldn’t be done with that aspect of culture.

Alpha Phi Alpha is a historically black fraternity. Weinberg sophomore Dami Arowolaju, an Alpha Phi Alpha member who helped organize the event, said there is a lack of understanding between different groups on campus, particularly between students of color and white students.

“One of the biggest things on this campus is students not understanding the deep-rooted issues that face other groups because they don’t experience it,” Arowolaju told The Daily. “They’re not immersed in the black community, so they don’t understand what black people feel and how they think.”

Weinberg senior and Alpha Phi Alpha president Cameron Dickerson told The Daily the goal of the discussion was to provide a space where attendees could discuss their views on misappropriation and come to some understanding by the end of the event.

Wright closed the meeting on a positive note, noting the global influence of black culture.

“Blackness is so freaking complex, and that’s what I love about it,” she said. “And that’s not a weakness, that’s an incredible strength, because I don’t know of any other identity that is so polyvalent … that has such an amazing impact on global culture when it comes to language, when it comes to music, when it comes to politics.”