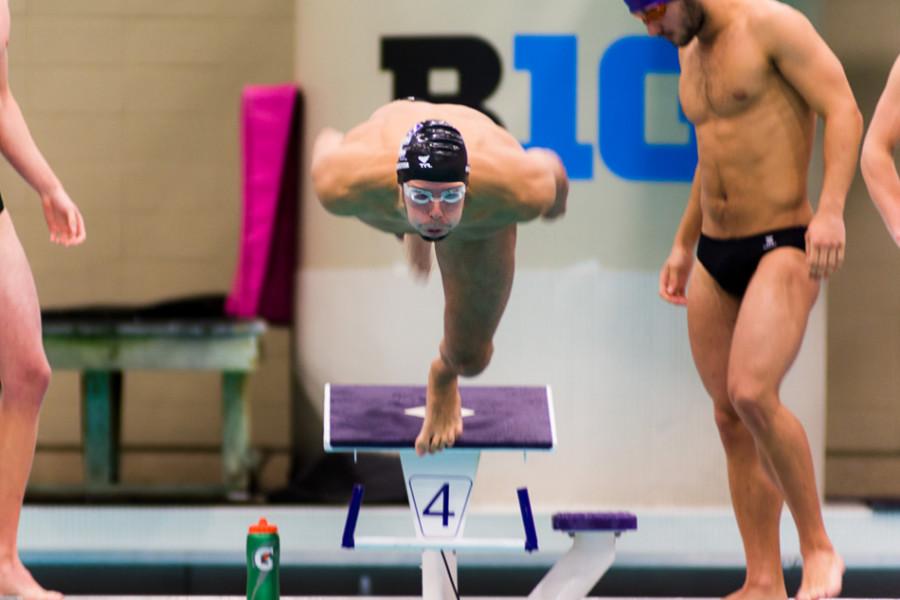 A Northwestern swimmer leaps into the pool. The Wildcats had a handful of strong individual performances, but struggled as a team at the Big Ten Championships, placing ninth out of 10 schools.

Northwestern had an exciting end to the Big Ten Championships on Saturday when junior Jordan Wilimovsky won a Big Ten title and shattered a school record in the process.

Wilimovsky won the 1,650 freestyle on the final day of competition with a time of 14:33.50, which broke the NU school record and the pool record at Iowa’s Campus Recreation and Wellness Center. The Saturday win is Wilimovsky’s first career Big Ten championship title and guarantees him a spot at the NCAA Championships later this month where, as of now, he will enter competition as No. 1 in the nation for the 1,650 freestyle event.

That win was not the only record Wilimovsky broke during the week. The junior surpassed the 500 freestyle school record on Thursday and placed third overall in the event. Wilimovsky received All-Big Ten first-team selection honors for his performances.

“Jordan was on all weekend,” coach Jarod Schroeder said. “He really took a step forward because typically he goes to a meet like that and focuses on the mile and has a decent 500, but this week he took a big step forward in the 500, too. During the mile I knew it would be good based on the 500, but I didn’t know it would be that good.”

NU as a team finished in ninth place out of 10 schools after four days of competition at the Big Ten Championships. NU’s Big Ten Sportsmanship Award went to senior Andrew Seitz after the closure of the meet.

NU was down a top diver, sophomore Andrew Cramer, due to a concussion, Schroeder said. The team therefore could not rely on the cushion of points that usually comes from the diving events.

Despite the ninth place finish, the team was happy with the performance it put forth at Big Tens and was up cumulatively more than 30 points from during last year’s competition, Schroeder said. The coach added he was “happy the entire weekend” with the way the team performed.

“We were missing one of our best divers so lost some points there,” senior captain Will Rosler said. “But overall we actually had a pretty big jump in points from last year to this year, so we put ourselves on a pretty good upward trajectory.”

During the first day of competition, in the 200 medley, the team of sophomore Andy Jovanovic, seniors Uula Auren and Mark Ferguson and freshman Almog Olshtein swam the third-best performance in NU history and placed fifth overall with a NCAA “B” cut time of 1:25.93. This relay team along with two additional swimmers, freshman Nick Petersen and sophomore Jack Morris, will continue to practice and head to a “last chance” competition next Saturday at Georgia Tech to see if they can shave off some time to qualify for NCAAs.

“We missed the NCAA cut by three tenths of a second,” Schroeder said. “We had some slow exchanges, so if we can clean-up those exchanges we’ll do it. A lot of times you don’t know what you’re going to get a week after a conference meet so we’re going to bring six guys down there. If someone’s feeling off, we might slide someone else in there.”

Later that day, the 800 free relay team of sophomores Charlie Cole and Jonathan Lieberman and freshmen Alex Snarski and Gage Kohner swam the second-fastest time in school history during the brief program and placed sixth overall in the event. The team’s time of 6:26.76 was shy of the school record by 0.59 of a second.

Overall, the Cats were excited about their performance and felt the team displayed great effort and times during competition, showcasing a positive trend over the years for NU.

“In my four years here it was the best overall in terms of each individual going best times and performing out of their comfort zones or what they expected,” Rosler said. “From top to bottom we carried the energy pretty well.”

NU’s effort was evident this weekend as the team kept a positive attitude throughout the meet. Ultimately, NU is excited about the future of the program and that promise is being recognized by other teams in the competition.

“Obviously ninth place isn’t where we wanted to finish, but our guys are swimming well and taking steps forward,” Schroeder said. “I got a lot of compliments from other coaches that really loved the way our guys competed this weekend. They felt like every session our guys were doing things special and not every team can say that.”