Women’s Tennis: Freshmen start to find themselves in matchups with Baylor, Texas 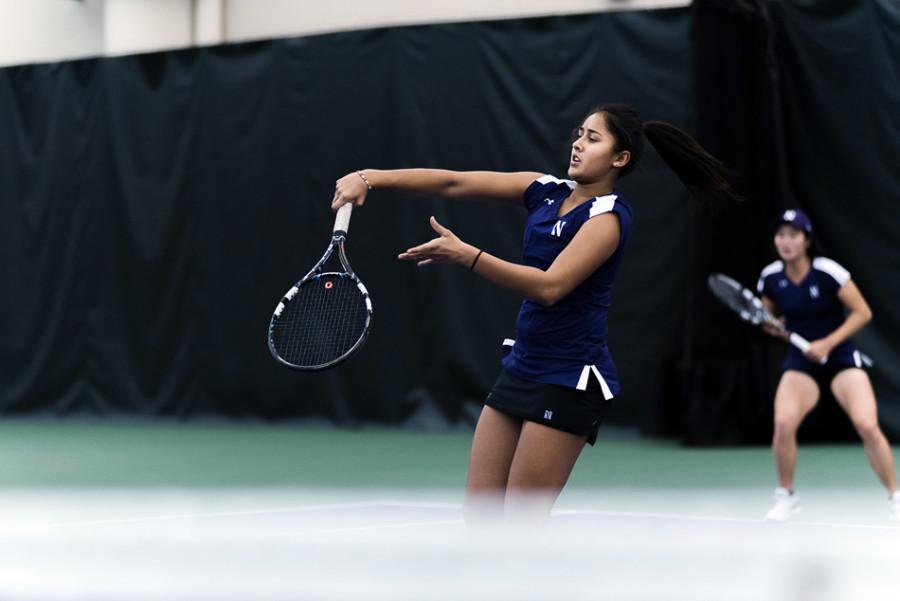 Rheeya Doshi completes a stroke. The freshman returned from injury and saw her first singles action of the season on Sunday against Texas.

After some ups and downs, the Wildcats took some formative steps at home this weekend, as all three Northwestern freshmen found themselves on the court together for the first time this season.

“It wasn’t a good performance,” coach Claire Pollard said. “It’s hard for the girls because they’ve been preparing so well. … They’ve been busting and doing everything we’ve asked of them. Maybe they wanted it so much that they let it get away from them — you can want something too much.”

NU wanted to move on quickly after the loss, returning Sunday to win 6-1 over No. 35 Texas (2-5). Sunday marked the first time all three freshmen started on the singles courts. For Rheeya Doshi, Sunday also marked her return from shin splints and her first appearance in singles for the Cats. Despite losing her match, she was excited to get back on the court.

“It felt good playing today, even though I haven’t been playing much,” Doshi said. “Coming out here today and constructing points, running, it felt different for me. I had fun.”

The freshmen are also starting to find their identity as a unit on the team. Pollard noted after the contest against the Longhorns that Chatt and Larner are “veterans” after playing seven matches. For Doshi to return from injury also helps to complete the trio.

“It was fun to have Rheeya finally back out there,” Chatt said. “We’ve missed cheering for her and having her on the court with us. Even just playing next to each other … having your best friends on the court, it motivates you to play better.”

Chatt also commented that finding the unit’s identity is a long process — not one that the freshmen are trying to rush either.

“No, not even close (to finding our identity),” Chatt said. “Personally, I can lie and say that we did, but I think it’s going to take all four years to finally figure that out, but it’s so much fun to figure it out.”

That motivation helped lead to the victory Sunday. Texas was unable to play with a full squad, so the Longhorns were forced to forfeit one doubles match as well as the No. 6 singles. After winning both doubles contests, the Cats made quick work of their opponent, clinching the match point after only an hour of singles play.

The rapid contest boded well for NU after being plagued with so much adversity. With Doshi’s return, the Cats might be able to see light at the end of the tunnel. Sophomore Manon Peri is still out indefinitely with a knee injury, and sophomore Maddie Lipp is out for the season, but having only two injured teammates is better than three. NU just has to hope fate does not try and get even with the squad.

“As things calm down a little bit and we don’t get hit with any more surprises, hopefully that will help us,” Pollard said. “It’s been hard to settle — we get something, then we lose someone. … Hopefully we can just have some stability.”