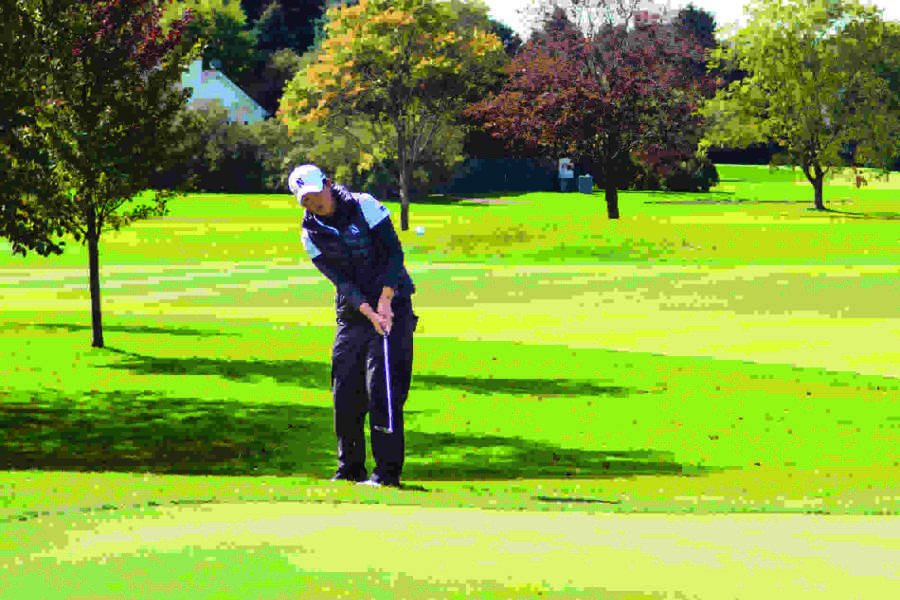 Junior Kaitlin Park chips toward the hole. Northwestern will be looking to repeat at this week’s Hurricane Invitational.

Victory eluded the Wildcats in the first event of the spring season, but Northwestern looks poised to make the second time the charm.

The Cats will head to Coral Gables, Florida, on Monday to take part in the 54-hole Hurricane Invitational, an event NU won last year.

Along with the promising recent history, the Cats are also by far the top-ranked team in the field, as NU currently holds the No. 7 spot in the country, with the next closest in the field clocking in at 25.

Against such a favorable group, it wouldn’t be surprising for NU to be chomping at the bit.

And indeed, coach Emily Fletcher said her team is ready to get back into action, but it’s more for the course they will be playing.

“We’re excited to compete again,” Fletcher said. “It’s a good golf course at the Biltmore, and a good opportunity at birdies if it’s not too windy. If we putt a little better (that’ll be good). We’re doing well with birdies, we just have to minimize mistakes.”

Nothing is a foregone conclusion in golf though. The field, although not daunting at the top, is a deep group. And NU already lost to No. 25 Iowa State in the Lady Puerto Rico Classic, the Cats’ first event of the spring.

The team is also making some changes to their starting lineup, with freshman Sarah Cho moving into the individual slot and sophomore Kacie Komoto finding herself back among the starting five.

The shake-up, though, is not born out of a poor play controversy.

“Sarah played well in Puerto Rico and is doing a nice job, and is continuing to learn and manage her way around a golf course,” Fletcher said. “But Kacie played well for us here last year and she’s a good player for us, so we’re looking for some nice contributions from her this week.”

Indeed, Komoto distinguished herself with a 12th-place showing at the Lady Puerto Rico. Fletcher iterated that having Cho as an individual this week will also help the team when it can use six players in a six-count-four format, and that the ebb-and-flow of the lineup isn’t likely to halt anytime soon because of supreme depth.

Among the other starters, Hana Lee stood out in Puerto Rico with three rounds of 75 or better that netted her 15th place.

The senior struggled in the fall with high scores, as rounds of 78, 81 and 82 marred her final totals in three separate fall tournaments.

Lee said she has worked to alleviate that problem, and the results are starting to come around.

“What I’m working on is staying in the present and not focusing ahead,” Lee said. “After Puerto Rico, it’s a bit of a confidence booster. Patience is key out here, and I did that well at Puerto Rico.”

Star freshman Hannah Kim shined at Puerto Rico with a runner-up finish, but another fall standout, Suchaya Tangkamolprasert, came down to Earth with three mediocre rounds.

The junior pointed to her putter as the main culprit in facilitating her struggles, but there was nothing to worry about long term.

“The greens were really tough, and the ball just didn’t really go in for me at Puerto Rico,” she said. “It was just a little bit of this here or there, it wasn’t anything major.”

Fletcher says short game continues to be a team focus, and that ball striking appears to be getting better and better each week as the team continues to shake off the rust from indoor play over the winter.

Tangkamolprasert concurred that team morale is still at a high point, and with one event under NU’s belt, the bad side effects of indoor practice will subside.

“We had to transfer a lot of what we learned from an indoor facility,” she said. “It was kind of tough for me to do that in Puerto Rico, but after the first tournament, I’m sure the results will be better this week.”

If the junior is right, NU may be marking off its first win of the spring and second victory of the year.