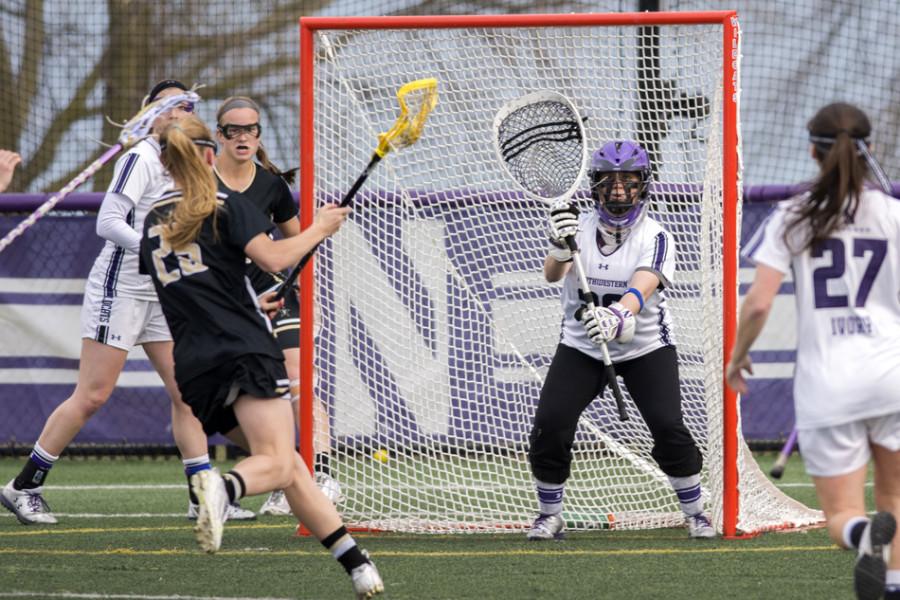 Bridget Bianco prepares for an incoming ball. The senior goalkeeper recorded a season-high 13 saves in a 12-11 loss to North Carolina.

Despite its most balanced offensive outing of the season Saturday, Northwestern couldn’t overcome a tough North Carolina squad in its third down-to-the-wire game this year.

No. 6 NU (3-2) started five freshmen against No. 2 North Carolina (4-1) in Chapel Hill on Saturday and kept pace with the Tar Heels throughout a high-energy, back-and-forth contest. Ultimately, though, midfield turnovers and draw controls did the Cats in for a 12-11 loss.

Saturday’s game was NU’s third contest decided by one goal this season, and the team’s first one-goal loss. The Cats are now 1-2 against Atlantic Coast Conference opponents with three programs left to play.

After falling behind 2-0 less than four minutes into the game, the Cats got rolling behind goals from freshman Selena Lasota that put NU on even ground.

The Cats and Tar Heels traded goals until NU had its first, short-lived lead with 14 minutes to go in the second half.

Then North Carolina’s Maggie Bill beat sophomore Sheila Nesselbush twice to score two goals in under one minute, giving the Tar Heels back the edge.

Late-game goals from freshmen Corinne Wessels and Nesselbush, who put in significant time at both ends of the field and paced NU’s offense with a hat trick, weren’t enough to keep the Cats alive.

It was Bill, one of two North Carolina players to end the day with a hat trick, who scored the game-winner with four minutes left to play.

In her collegiate debut, Wessels was one of two players to notch their first goals of the season Saturday. She recorded two goals, two assists, a draw control and a ground ball on Navy Field.

Senior Jess Carroll also scored her first goal of the season off the bench, rounding out a balanced attacking core of six goal scorers, tied with the Marquette game for the most NU has had in a single game this season.

Carroll was the only senior to score and one of few on the pitch Saturday.

Senior Kara Mupo did not play.

At the other end of the field, senior goalkeeper Bridget Bianco did her class proud. Bianco made a season-high 13 saves out of 29 shots from a crafty Tar Heels’ offense, including four free-position shots.

In an otherwise evenly matched contest, it was 14 turnovers under heavy midfield pressure and losing 15-10 on the draw control that cost NU the game.