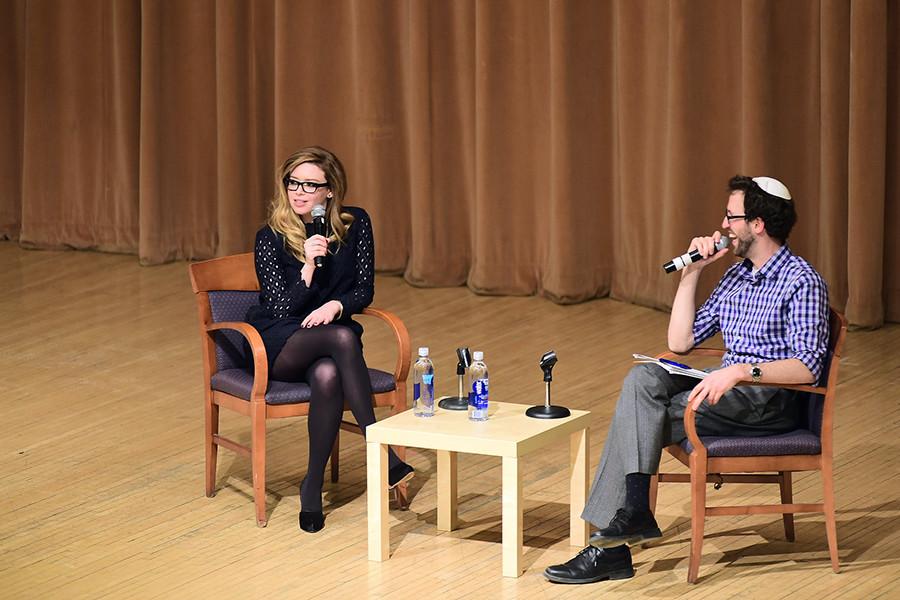 Actress Natasha Lyonne said at 16, her plan was to go to college and make movies about the things she learned.

That plan didn’t work out, as she was never able to graduate college.

Lyonne, best known for her role as Nicky Nichols in the Netflix series, “Orange is the New Black,” visited Northwestern on Saturday as NU Hillel’s winter speaker. She spoke to an auditorium of more than 300 people about her Jewish identity and choosing acting over college.

“As a young girl in Israel, for some reason we only really had ‘Rocky,’ ‘Scarface,’ ’The Godfather,’ ‘A Fish called Wanda’ and ‘It’s Alive,’” she said. “I watched all those movies on a loop constantly … I really liked those 70s tough guy kind of movies, and that was the kind of acting I wanted to do.”

Hillel Rabbi Aaron Potek moderated the event. Potek asked Lyonne questions about her childhood and how her childhood experiences affected her career. Although the two made some jokes, their conversation was serious.

Lyonne said the Holocaust impacted her family dynamic growing up because there were Holocaust survivors on her mother’s side of the family.

“There’s a whole generation of children of survivors who have this very specific experience of how to live in the world, how their own problems were supposed to be reasonable in the face of what their own parents had been through,” she said.

Despite the horrors of the Holocaust, Lyonne said she believes it added depth and color to the modern Jewish experience and gave her a stronger sense of morality because she grew up with a “Hitler shadow.”

Potek pointed out that remembering the Holocaust is a large part of being Jewish.

“I didn’t realize she grew up with so much Holocaust in her background,” he told The Daily. “There were a bunch of things that were surprising that isn’t on screen.”

Weinberg freshman Sara Halloran, who attended the talk because she is both Jewish and an “Orange is the New Black” fan, said she enjoyed the event because she was able to connect with Lyonne’s Jewish background.

Potek said he enjoyed being able to have the conversation with Lyonne because he was able to ask meaningful questions about her life. In the predominantly female cast of “Orange is the New Black,” Lyonne plays a gay character but said she doesn’t think either of these things should say anything specific about her role as an actor or her character.

For students looking to go into acting like Lyonne, she suggested they find a community of like-minded people and tell stories their own way. However, she warned, it is hard to make a living out of acting, and only the top 1 percent are making the money.

“There’s got to be a real inner fire for going the distance, and it’s got to be okay not to make it and you’re really enjoying what you’re doing,” she said. “It’s not about winning at life, it’s about having a life.”

Correction: A previous version of this story misstated the day Natasha Lyonne spoke on campus. She spoke Saturday. The Daily regrets the error.