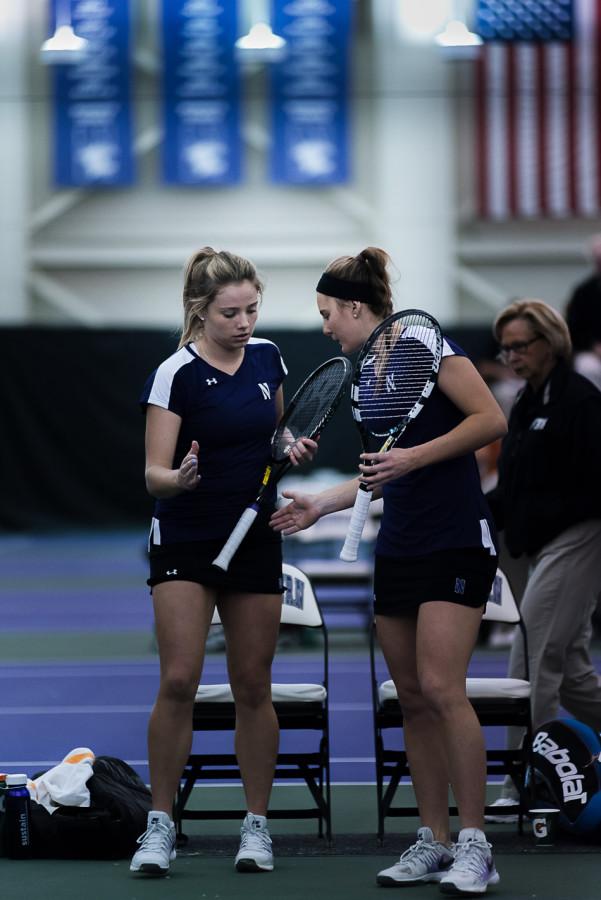 Alex Chatt and Brooke Rischbieth go in for a high-five. Despite a significant drop in the rankings, the Wildcats feel like they have found their way after some early-season struggles.

After an unexpected break in the action, the Wildcats didn’t skip a beat.

For the second time this season, No. 33 Northwestern will take on a top-10 opponent. The Cats host No. 6 Baylor on Friday, followed by another home match against No. 35 Texas on Sunday.

After coming off essentially a free week of practice because last weekend’s match against Vanderbilt was postponed, the Wildcats (3-2, 1-0) are again champing at the bit to play an opponent like Baylor’s Bears (10-2).

The home squad has found its groove, but the Cats will take on a Baylor team that started the season on a 10-game winning streak.

Two losses have come since, with the Bears most recently falling to the Vanderbilt Commodores.

As for NU missing out on Vanderbilt on Saturday, the team sees it as a moot point.

“To be honest, I don’t think (not playing Vanderbilt) helped or hurt us,” freshman Alex Chatt said. “We went to that match hungry, and we weren’t able to play it. We have to take it one day at a time. We’re ready to play a match because we feel like we haven’t been playing any matches lately.”

Indeed, NU went two weeks without a match leading up to the Big Ten opener and once again experienced an off week with the postponement at Vanderbilt. Because of the missed competition, the Cats dropped from 21st to 33rd in the rankings.

The 12-spot drop has proved to be a motivational tool for NU, especially after starting the conference season 1-0 and then beating Purdue 4-3 in a nonconference match. The drop in rankings can be explained by the newly implemented computerized ranking system rather than voting.

“The switch from ballot voting to a computerized ranking always causes some shake-up,” said Tom Loughrey, the rankings manager for the Intercollegiate Tennis Association. “The computer tends to favor teams with highly ranked wins and few or no losses early in the season. Northwestern only has three wins, so that’s costly and although both of its losses are to quality competition, it’s just points added to the denominator of their equation.”

The Cats have faced great adversity this season, and the ranking only adds another challenge. NU began the season ranked in the top 20. The Cats haven’t been out of the top 25 since the 2007-2008 season (the Intercollegiate Tennis Association website only provides weekly rankings that far back) and have not finished a season outside the top 25 since the 1998-1999 campaign, the final one before coach Claire Pollard.

The last time the Cats took on a top-10 team, NU fell to pieces under the strength of Duke. At the time, the Cats ranked 22nd and the Blue Devils were fourth. Since that time, however, NU has found its identity and improved dramatically.

The Cats are hoping that bodes well as they try to climb back up the ranks.

“We have grown tremendously, competitively,” Pollard said. “(Coach Rob Gurden) made a suggestion the Tuesday after the Duke match, and we implemented it in practice. From that moment, we’ve kept with the same theme of teaching the girls to get to the edge of competing so hard — silly little things like calling the score out loud, calling the ball out when it’s out … counting out loud to reiterate the fact that there is something on the line all the time.”