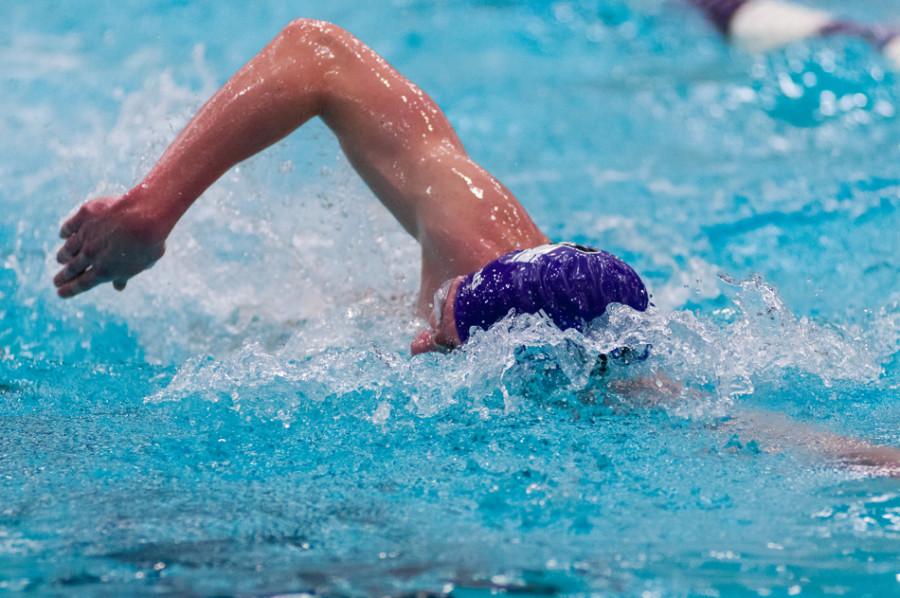 Northwestern slashes through the water. The Wildcats have taken a relaxed approach ahead of Wednesday’s Big Ten Championships.

For coach Jarod Schroeder the feeling before the Big Ten Championships is akin to an “emotional rollercoaster.”

“I get stressed out at meets like this,” Schroeder said. “I was telling the guys (on Sunday) that they’ve taken this journey since September, and as a coaching staff we’ve taken that journey with them. Whether they realize it or not, we were by the side of the pool every length that they swam and every lap that they did.”

Big Tens will start on Wednesday for the Wildcats as they head to Iowa’s Campus Recreation and Wellness Center for the four-day competition. This will be the first Big Ten Championships with 12 teams, with the addition of Rutgers this year. There will be seven ranked opponents in the championships.

Despite the stiff competition and the perceived stress levels, Schroeder said he is telling his team to just relax and have fun at the meet.

“We’ve swum pretty well this season, so I think that the guys are in a good place mentally,” Schroeder said. “The tough thing to do is to convince these guys that the journey is just as important as the end destination.”

Junior captain Van Donkersgoed agreed that this year more energy has been focused on the process instead of the final outcomes.

“I think last year we had an incredible dual meet season, and we had maybe some pressure going into Big Tens and it was a little bit flat,” Donkersgoed said. “This year we’ve had an excellent dual meet season, we’ve raced really well, but I think that there’s less pressure and more excitement and relaxation.”

In swimming, pressure builds on the final performance of the season, as it indicates how well the team did overall. That “journey” Schroeder alluded to was an important one for Northwestern, as the team ended the season with a winning record of 7-6.

This year NU battled with a difficult line-up, facing ranked opponents throughout and ending the season 0-5 in the Big Ten. Each meet, though, Schroeder emphasized the importance of taking off undue pressure.

Even the senior swimmers who will race in their last Big Ten Championships are feeling fewer nerves than in previous seasons.

“It’s kind of weird going in, knowing it’s going to be my last race ever,” senior Aaron Sears said. “I’m excited, though. I just want to go and have fun. I think just relaxing is the biggest thing right now.”

The Cats are the smallest squad in the competition and are relying on big wins from diving and relay teams to gain crucial points. Schroeder said he believes the squad has strong positions in these events, and is hoping the swimmers chosen for the relays will step up to the challenge in preliminary rounds and advance to the finals.

Relays during conference meets like the Big Ten Championships also have broader implications for the upcoming NCAA Championships as swimmers try to lower their best times to qualify for the competition in late March. Donkersgoed said so much emphasis is placed on relays because they are a “realistic way” to qualify more swimmers for NCAAs.

Overall, NU is excited to make a splash at the conference competition this week.

“I think people are relaxed but focused,” Donkersgoed said. “Each person is focused in their own unique way, and I think, as a program, we’re excited to just work the process and see what the outcome is.”