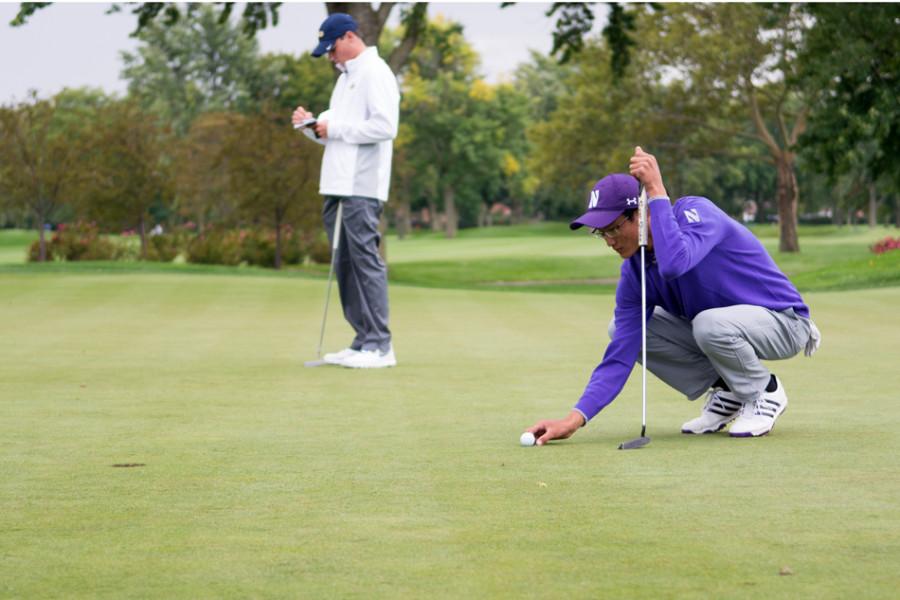 Charles Wang lines up a putt. The freshman produced a four-under 68 in the second round at the Jones Invitational, on his way to a four-way tie for 19th.

Winter practice paid off and allowed Northwestern to finish a robust third place in its opening stroke play event of the spring season on Tuesday.

The Wildcats entered the Jones Invitational in Valencia, California, as No. 57 in the country, good enough for the fourth-highest mark in the field. And in the end, the Cats played above their rank. NU found itself in solo third after the first round, moved back to fourth in the following 18 and jumped back up to third in the final round.

In the process, the Cats defeated No. 50 Winthrop and finished just four strokes behind No. 22 Kennesaw State for second.

Last year’s squad began spring stroke play with a brutal 13th-place showing in Puerto Rico, so this result was a little more satisfying.

“This performance was encouraging this early in the year,” coach David Inglis said. “The guys plated well, tons of really good in the performances, a lot of birdies, just made some mistakes … We’ve all gotten better. We’re not 100 percent yet.”

The Cats took a chance with three freshmen in the starting lineup, but youth wasn’t an issue for NU at Valencia Country Club. Inglis said the newbie core brought an energy and vibe to the team, and it could be seen with every NU player having at least one round of three birdies or more.

The standout for the Cats in this department was Josh Jamieson, who was looking for consistency in the spring and found it in a way — with some extra stuff — in California.

The junior fired respectable rounds of 69, 75 and 71 on his way to a tie for sixth, but the scores did not do justice to just how spectacular his play could be. Jamieson registered 14 birdies and two eagles over 54 holes, putting a red number on nearly a third of the holes he played for the week.

One of those scores was a hole out from 118 yards for an eagle on the 11th hole during the first round. Facing a downhill lie but a good angle from the left side of the fairway to a right pin, Jamieson hit a low wedge shot into a soft green, landing it six paces beyond the hole and spinning it right back into the cup.

The hole-out was just one of many impressive wedge shots from Jamieson for the week. He said he worked extensively on his wedge game before the tournament, which paid off for a course that offered plenty of them on approaches to par-fours.

Jamieson also liked the attitude he picked up from his barrage of red numbers.

“I don’t think I’ve made nearly that many birdies in a college tournament,” Jamieson said. “It allowed me to play a little bit more carefree. I’m looking to replicate that in the coming tournaments.”

The Cats may have made a few too many mistakes, but proved remarkably consistent in their round-to-round scores with only one 18-hole total over 76.

That outlier was Charles Wang’s final round 79, but he preceded it with a nearly error-free four-under 68 on his way to a tie for 19th in his insertion back into the lineup.

The second round stood out, but the freshman was pleased with his 54-hole total.

“(In that round of 68), I knew I had the ability to go low, which helped,” Wang said. “Overall, I think I played well this week and hit a lot of good shots. I take a lot of positives.”

Avoiding high rounds had a useful side effect — NU’s roster played well top to bottom. The shuffling has been constant in the lower half of the lineup, but in this event, four of the Cats’ five starters finished in the top 30.

Seniors Matthew Negri and Scott Smith didn’t make the starting lineup, but not for a lack of quality in their play.

“Guys have really improved from the winter, and it makes it really tough at the end of the lineup because all of those guys have gotten better,” Inglis said. “But it’s nice to have seven guys playing well and contributing to the team.”

Every team can benefit from an ace, though, and NU has had one in recent events in freshman Dylan Wu. Could Jamieson take up that mantle?

The confidence certainly matches a man of many red numbers.

“I think this event was the first time I’ve felt that my golf is close enough to victory,” Jamieson said. “If I can take out some mistakes and improve in a couple of areas, I feel confident I can win a tournament now.”