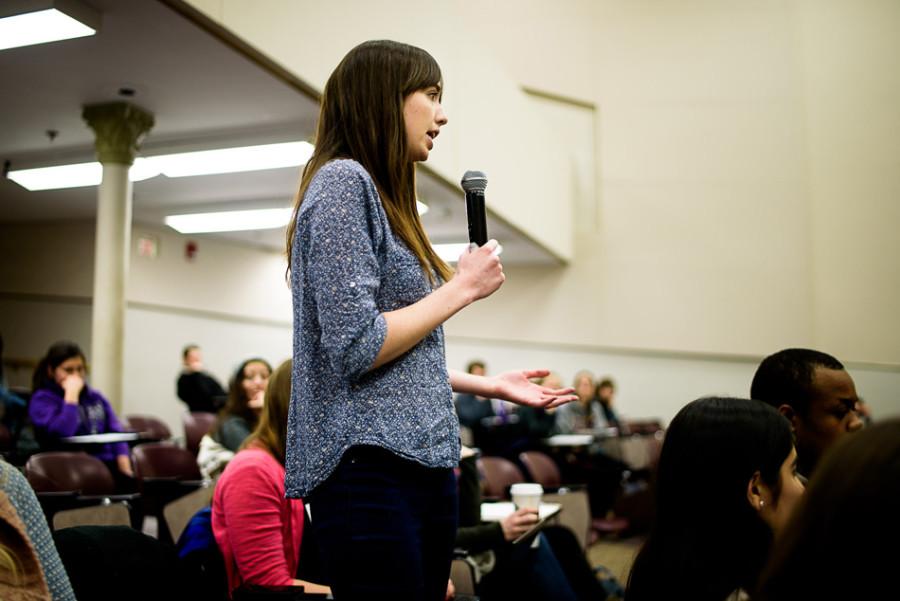 Medill junior Mallory Busch, a former Daily staffer, argues in favor of a U.S.-based Social Inequalities and Diversities requirement. A forum was held Monday for students to provide input on the proposed academic requirement.

Medill junior Mallory Busch’s older brothers told her it was easier to get a job in America if she wasn’t white, she said Monday in a forum about the Weinberg College of Arts and Sciences’ potential diversity academic requirement. Busch, who comes from a predominantly white community, disagrees.

During the forum, she argued alongside many other students for a more U.S.-centric curriculum than what was described in the proposal.

“(My brothers’) education has not provided them with a real world glimpse of America,”​ Busch, a former Daily staffer, said during the event. ​“I’m just concerned that we are going to neglect to educate some of our graduates.”

The forum was hosted by Associated Student Government, the Weinberg Student Advisory Board and Weinberg faculty, for students to present their opinions on a proposal for a Social Inequalities and Diversities curriculum requirement. Faculty have been discussing the possibility of such a requirement for the past two years. The goal for implementing the requirement in Weinberg is the 2017-18 academic year, and would only affect incoming freshmen that year, said Mary Finn, Weinberg associate dean for undergraduate academic affairs.

The Medill School of Journalism, Media, Integrated Marketing Communications and the School of Education and Social Policy have already implemented such a requirement. An original proposal from the University Diversity Council in February 2013 called for all six undergraduate schools to add the requirement to their curricula.

Weinberg’s newly revised proposal, which reflects faculty input after a meeting Feb. 3, has an edited requirement for students to “apply what they have learned to their own experiences and conduct as students on campus and as citizens or residents of the United States.”

On Monday, many students said the degree requirement should have a more U.S.-based approach.

“I’ve seen a lot of my white peers pick and choose when they want to learn diverse perspectives,” he said. “So they can go abroad and learn about a specific culture and learn about inequalities also, and then come back and go back to their very white lives.”

Students have been circulating a petition supporting the Social Inequalities and Diversities requirement with a focus on the United States since Feb. 9. As of Wednesday’s ASG Senate meeting, the petition had garnered almost 400 signatures.

However, Sociology Prof. Mary Pattillo and Spanish and Portuguese Prof. Jorge Coronado, who helped lead the discussion, said a U.S.-centric requirement would narrow students’ understanding of social inequalities. Pattillo said she supports such a requirement despite its narrower focus.

Coronado said there is a limit to what can be taught in the classroom.

“It’s difficult to conceive how you can address the pain in the classroom,” he said. “I don’t know how to do that. I don’t think that the classroom is that space we can do that productively.”

Bienen junior Jacqueline Ovalle said she thinks the classroom is the right place to address diversity issues in the United States because it provides students a better grasp on social inequality.

“When I started to take classes in social inequality, I began to see the way that I am privileged and disadvantaged at the same time,” she said. “You start to learn how in your present and in your future you are valuable.”

Weinberg senior Heather Menefee said classes at NU can teach students about social inequality within the United States while also including an international component. She said Weinberg faculty should consider students’ voices.

“Students who are here expressing their need for a course to educate their peers so they don’t need to continue educating their peers,” she said. “We’re in this room because students have felt it upon themselves to call for this academic requirement. What I’m hearing is a disservice to the students in this room.”

No students at the forum spoke against the U.S.-centric approach, but Finn said at the event that students approached her and the Weinberg Student Advisory Board before the forum with concerns.

Finn said she will consider student opinion in favor of a U.S.-centric requirement and bring those ideas back to Weinberg faculty for further discussion.