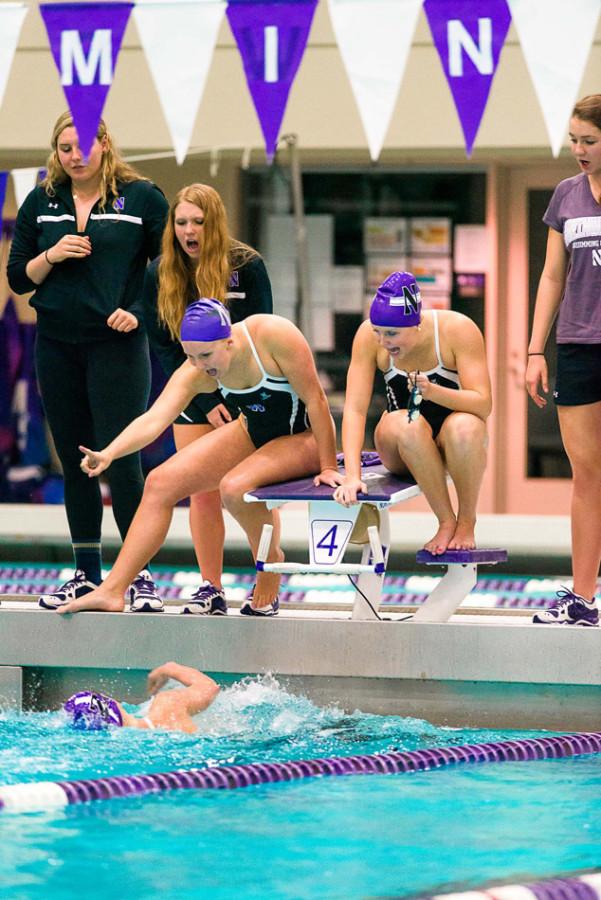 Northwestern swimmers cheer on a teammate during a heat. The Wildcats placed 10th out of 13 teams at the Big Ten Championships on Saturday.

The Wildcats finished 10th out of 13 competitors at the conclusion of the Big Ten Championships on Saturday at Ohio State’s McCorkle Aquatic Pavilion and ended the regular season with a record of 7-6 overall and 2-4 in the Big Ten.

Despite the low placing at the Big Ten Championships, NU improved in point total this year compared to the points gained during last year’s competition, coach Jimmy Tierney said. The Cats had strong individual performances but could not pull out enough first place wins to garner points that would catapult them to a top position.

Tierney said the team was dealing with wear and tear from traveling as well as sickness. He noted that when it’s February in the Midwest, “you kind of have to deal with that.”

The coach highlighted the strong performances of the relay teams, and said six out of the eight swimmers in the relays had their lifetime best swims at Big Tens. He noted junior Julia Pratt’s performance in the relays as well as freshman Mary Warren’s contribution.

“We felt our relays as a whole were a lot more competitive this year, which was encouraging for us,” Tierney said. “We made it a point to break a school record on the relay right off the bat. I didn’t think that would pressure them, I thought it would give them confidence. And they came through very well.”

The team shattered the 200 medley relay school record on the first day of competition. While throughout the season there has always been an emphasis on teamwork, that theme was never more prevalent when talking about the success of the relays.

“It was so cool to look up at the scoreboard and to see your whole team cheering for you and know that you did it,” Warren said. “It had been a team (goal) to get a school record, and we were all wishing for it and we went out and did it.”

Tierney also noted sophomore Annika Winsnes, who made it to Saturday’s final rounds and ended up with a ‘B’ cut time of 49.61 in the 100 free consolation final, where she ended up placing 13th overall in the event. Winsnes later raced that night in the 400 free relay which placed eighth overall.

“Certainly, Annika was stellar all the way through the meet,” Tierney said. “She was confident and calm, and she’s taken herself to a new level competitively.”

Another highlighted swimmer was junior Emily Launer, who won the Big Ten Sportsmanship Award for Northwestern at the conclusion of the competition.

Overall, the Cats are excited about their winning season and are proud of the effort and performance put forth at this past week’s final competition.

“We had a lot of personal bests at the meet,” Winsnes said. “While we didn’t rank in the meet where we wanted to, at the end of the day, I think we should be very proud of our entire season. We fought through the season and through Big Tens.”