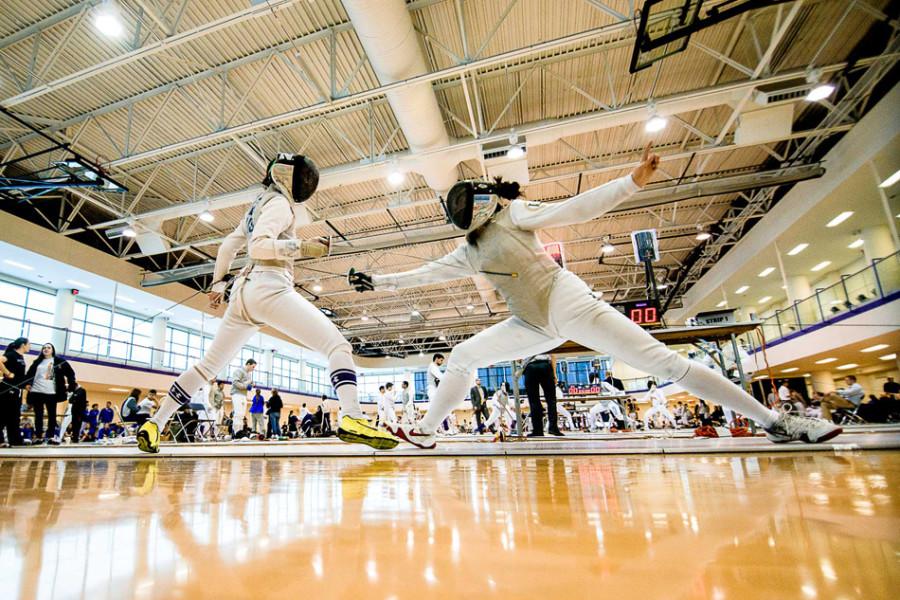 A Northwestern fencer, left, dodges a thrust from an opponent. The Wildcats had a strong performance this weekend but ultimately came up short against rival Ohio State.

Feb. 21 was marked on the calendar as a battle between Northwestern and Ohio State to duel for the Midwest Fencing Conference Championship crown. The matchup lived up to the hype, but the Cats came out on the short end.

The Midwest Fencing Conference Championships took place Saturday at the Henry Crown Sports Pavilion, but the home turf for No. 7 NU was not enough to overcome the menace from Ohio.

The No. 5 Buckeyes beat the Cats in the finals of foil and then sabre to put their mitts firmly on the conference crown, and a second-place showing in epee was enough to secure Ohio State the Midwest Fencing Conference Championship title.

NU finished second in the event behind the rival Buckeyes.

Based on the team’s rhetoric heading into the conference championships, the final outcome would’ve seemed like a disappointment. But coach Laurie Schiller took an optimistic approach in the aftermath.

“We did well and we did everything we wanted to do and we came within a whisker of knocking off Ohio State,” Schiller said. “Are we disappointed we didn’t win? Yes, but we got a gold and two silvers. All around I thought it was a pretty good day for us.”

Of course, that gold might have been a main reason for his cheery spirits. After falling to Ohio State 5-2 in the finals for foil and 5-4 in the sabre finals, the Cats rocketed out to a 4-0 lead in the championship for epee.

The Buckeyes scored the next 4 points, but when NU got the deciding fifth touch, the team had secured its first conference title in epee since 2002.

The result wasn’t overly surprising, as the Cats and Buckeyes were the two best squads overall and in this format. NU had the top seed and had beaten Ohio State in epee earlier this season.

The epee group at NU took the result as a testament to its resilience.

“We lost two really strong fencers from last year,” said sophomore epee Mandeep Bhinder, who contributed to NU’s 4-0 jump on Ohio State. “So this showed that we can really come together as a young squad and win a championship.”

Despite the lack of a conference title, Schiller said he wasn’t disappointed with the other results following the event.

The opening foil result mostly mirrored NU’s performance in this format against Ohio State in two previous match ups this season, where the Cats combined to lose 11-7 in foil.

NU was the No. 1 seed in sabre and had defeated the Buckeyes in the format on both previous meetings this season, but by razor-thin 5-4 scores.

Sophomore sabre Cindy Oh did her best to produce the same result with a pair of victories.

“We knew it was going to be a close one,” Bhinder said. “We could see from across the strip that they had lost. It was upsetting, but we didn’t let that bring us down or lose our focus.”

The Cats next compete in the NCAA Midwest Regional at home on March 7. In the meantime, Schiller said NU can take solace in that it took itself a step forward this year, with Ohio State actually concerned about the Cats at conference championships.

As for that epee win, it should do wonders going forward.

“At the beginning of the year, people would’ve pointed at the epee squad and said this is the weak link among the squads,” Schiller said. “And you know what, they were the ones who got the gold. So I think they take a lot of confidence from that.”