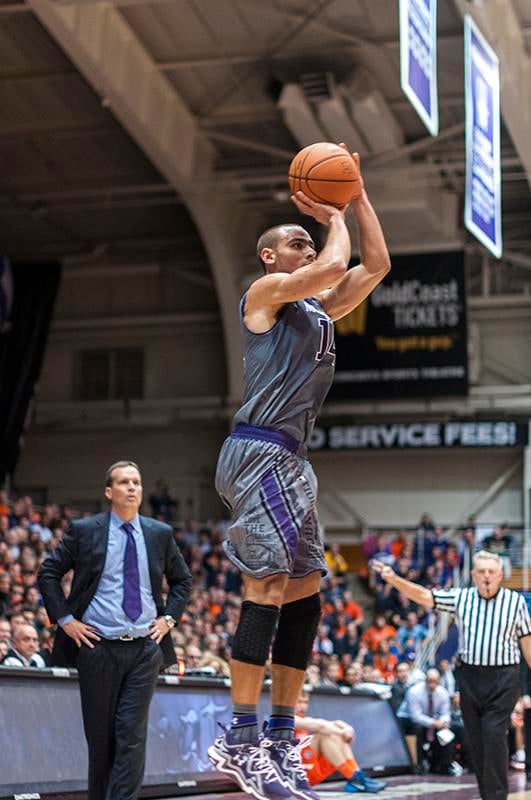 Tre Demps goes up for the jumper. The junior guard scored 16 points for Northwestern on Saturday, part of a robust offensive effort in a 60-39 Wildcats win.

Northwestern is getting into its zone.

But despite the final margin, the contest wasn’t a Cats runaway from the start.

In the opening minutes, it looked as if Penn State had no problems with NU’s 2-3 zone, as the Nittany Lions quickly made four 3-pointers and took a 12-3 lead.

“After they hit their first four 3s, it was testing my patience with sticking in the zone,” coach Chris Collins said. “But we stayed the course with it, and our defense was fantastic.”

“We didn’t start all that well,” Sobolewski said. “But the second unit really came in strong and gave us some energy and started playing some defense, which really set the tone for the game.”

After the initial offensive burst, the length of the Cats’ defense was able to force turnovers and helped the home team attack the glass hard.  As the defense got into its groove, Law got into his on the offensive end.

“I just felt like I needed to do something to lift my team’s intensity and play as hard as I could,” Law said. “Because as one person plays hard, everyone else seems to follow suit as a team.”

A fast break layup by Law gave the Cats their first lead of the game at 13-12. Later in the half, Law got another bucket at the rim and NU extended its advantage to seven. Law was the leading scorer and rebounder at the half with 9 points and six boards as the Cats took a 28-20 lead into the break.

Coming out of the half, Law was given the chance to start instead of coming off the bench, and he took advantage of it. He continued to be a disrupting force on the back end of the 2-3 zone and kept up his solid rebounding performance.

NU increased its lead to 14, forcing Penn State to extend its defense. The Nittany Lions began pressuring the ball, but freshman guard Bryant McIntosh remained calm and did not let the increased pressure affect the Cats ball security.

Although the Nittany Lions could not force turnovers with their defense, they slowed the Cats’ scoring production. A 12-2 run by the visitors cut NU’s lead down to 4 with just over 11 minutes left.

With momentum starting to go in favor of the visitors, sophomore forward Sanjay Lumpkin took a huge charge to stop a Penn State fast break, and junior guard Tre Demps and Law hit back-to-back threes to give the Cats a 10-point cushion.

NU would not let up from there. Demps, Law and Olah were the catalyst for a 22-5 run that allowed the Cats to close out the 60-39 victory.

McIntosh had a game-high eight assists to go along with 5 points, and Demps and Olah chipped in 16 and 10 points, respectively.  The star of the game however, was Law. The freshman had his first career double-double by reaching game and career-highs in points with 17 and rebounds with 11.

“During these two last games it has been really good,” Law said. “But the best thing to me is that we are on this three game winning streak.”