Lacrosse: Northwestern gets back to winning ways against overwhelmed Marquette 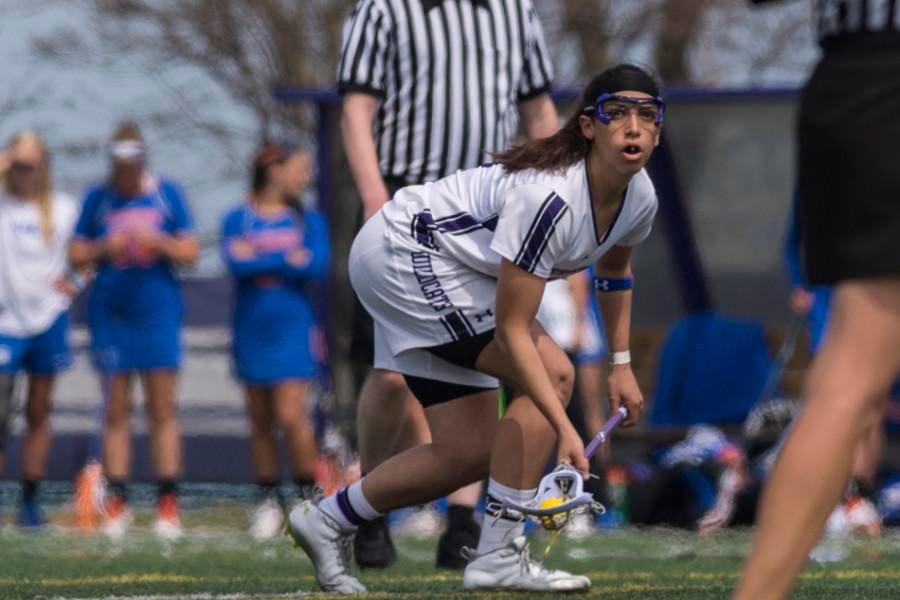 Kara Mupo waits for the whistle. The senior attack contributed a goal in Saturday's 13-6 win, but it was freshman midfielder Selena Lasota who led the offense with her six scores.

Defense and freshman midfielder Selena Lasota have held the Wildcats together in this young season, and it was more of the same Saturday.

No. 5 Northwestern (3-1) pounced early on a vulnerable Marquette (0-3) squad, jumping out to a 5-1 lead less than eight minutes into the contest and cruising to a 13-6 victory.

The win comes two days after the Cats suffered their first loss of the season, a thorough home beating at the hands of No. 8 Duke.

Saturday’s contest was a clear mismatch from the outset, with NU’s high national standing and a winless Golden Eagles. And the Cats’ offense ensured there would be no surprises.

Junior midfielder Kaleigh Craig and senior attack Kara Mupo each contributed a goal in the initial minutes, but it was Lasota’s hat trick in the opening eight minutes that moved NU out 4 goals ahead.

Both offenses would stall for the rest of the half, but the opening eight minutes of the second period nearly replicated the first. NU outscored Marquette 6-1 in that span, with 3 more goals from Lasota in three minutes, and NU had an insurmountable 11-3 lead.

The Cats continued their strong early season defense on Saturday. The 6 goals allowed come on the heels of giving up just 5 against No. 7 Virginia, and just 4 in the final 37 minutes of regulation plus overtime in the season-opener against USC.

NU had just three saves on the afternoon, but counteracted that by forcing an astounding 25 turnovers on the Golden Eagles.

The one true difference for the Cats that could bode well was their performance in draw controls. NU has struggled all season in this department following the departure of Alyssa Leonard, and coach Kelly Amonte Hiller has said she wished to see her team take 50 percent of the draws.

Against Marquette, NU actually led 12-9 in draw controls, and the Cats jumped out to a 5-1 cushion in this category as their early lead grew to this same margin.

The game was a step in the right direction for NU, even if it was against an inferior opponent. The Cats will be back in action next Saturday against No. 2 North Carolina.