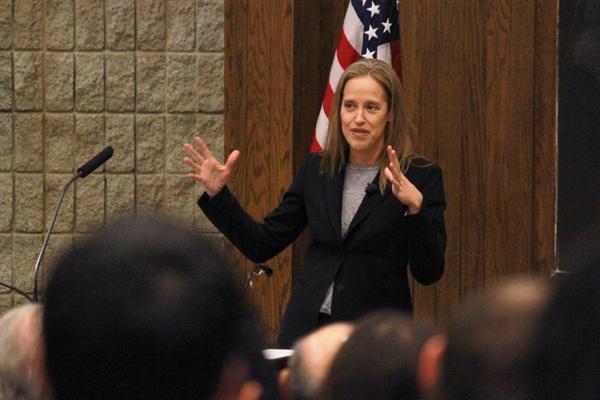 Wendy Kopp, founder of Teach for America, speaks at a Northwestern event in 2013. TFA has received slightly fewer applications from NU students this year, a spokeswoman for the organization told The Daily.

Fewer Northwestern students are applying to join Teach for America this year, a spokeswoman for the organization said, as the nonprofit faces a nationwide drop in applications for the second consecutive year.

NU, a longtime top contributor of graduates to TFA, sent just 24 alumni to the program in 2014. Two years before, 63 NU graduates joined TFA, ranking number one in the medium-sized schools category of top contributors.

Applications to join TFA teacher corps have dropped about 10 percent compared to last year, The New York Times reported. TFA has shut down two of its training centers and has estimated that their teacher corps could fall by as much as 25 percent.

Dana Cronyn, a TFA spokeswoman, told The Daily that TFA does not release application numbers, but it has seen “a slight decline” in applications from NU students since the beginning of the academic year. TFA application deadlines are spread out throughout the school year, and the last one this year is March 6.

“At this point in the year, we already have a number of Northwestern students who have committed to teach for next year, who kind of already made it through the Teach For America application process,” Cronyn said, adding the organization hopes these students inspire their peers to also apply before the last deadline.

Cronyn said she believes fewer people are choosing to teach as the economy has improved.

“This is something that not only we are feeling the effect of,” she said. “Many of our partners have seen contracting applications for alternative certification programs or general service programs after college … This is a kind of a trend that’s happening across education.”

Cronyn said the most concerning aspect of the decline in interest in education is not the effect it has on TFA but rather the impact it has on students.

Camielle Taylor (SESP ’13) started working with TFA in the Winter Quarter of her senior year at NU. She said she joined because she wanted to help low-income students have the same educational opportunities she had.

Taylor, who is teaching in Baltimore, said application numbers may be falling due to recent criticism of the organization.

“I know that Teach For America has been under fire recently,” she said.“There’s a lot of criticisms and skepticisms so I wouldn’t be surprised if that’s the reason why.”

Taylor defended the organization, acknowledging it “has its flaws but it also is doing a lot of really amazing things for the community.”

Anna Radoff (Weinberg ’14) works with Teach for America in Chicago and said some people may be dissuaded from applying because of the difficulty of teaching.

“I’m not going to sugarcoat it — teaching is hard,” Radoff said. “I know people who thought about (joining) and looked into it more and decided it wasn’t for them.”