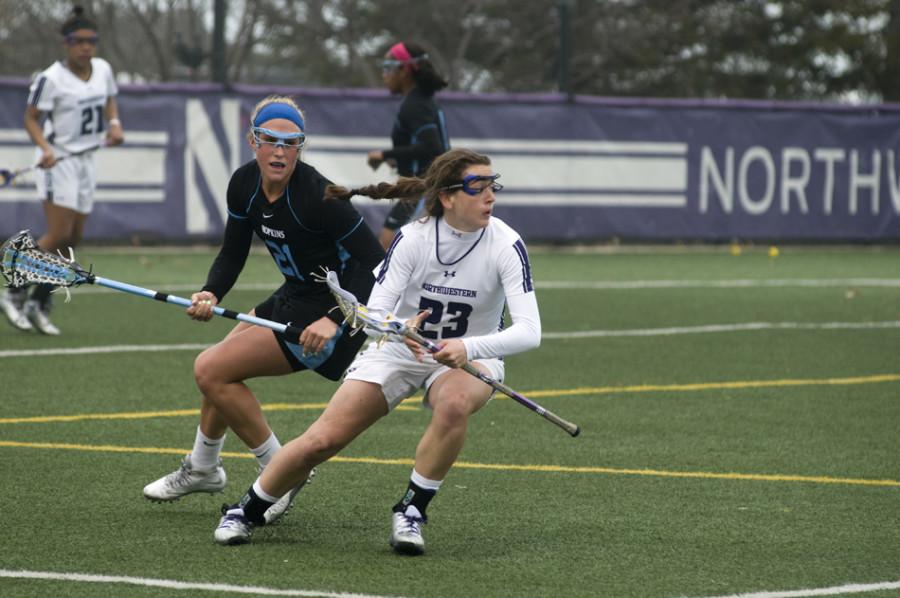 Junior Lauren Murray was one of several Wildcats who took the draw against Duke. Northwestern is still searching for answers at draw control, evidenced by the Blue Devils’ 17-9 advantage in that category on Thursday.

For the third time this season, Northwestern struggled to find the net against a lower-ranked opponent.

But this time, there was no second-half surge or infallible defense to prompt a comeback win.

Lasota scored 5 in Northbrook, improving her season total to a team-leading 11 goals in three games. Craig had 4 goals, tying her career-best for the third time. Each goal was unassisted except for one of Lasota’s.

In contrast, the Cats’ defense faced an onslaught from the Blue Devils, who recorded eight different goal scorers.

Although senior Katie Trees led Duke with 4 goals, it was classmate All-American Kerrin Maurer who fueled Duke’s offense with six draw controls, two assists and 3 goals of her own.

Concerning the Cats’ lack of offensive production, coach Kelly Amonte Hiller implicated her team’s inexperience in playing together on attack.

“We just have to figure it out,” Amonte Hiller said. “Once they start sliding, we have to start moving the ball. We have a lot of weapons and I think that ultimately it comes down to draw controls in my opinion, that was the game.”

Maurer helped the Blue Devils best the Cats on the circle 17-9, despite Amonte Hiller putting six different players in to take the draw against Duke’s cohort.

“They have the technique, they’ve been practicing it ad nausea, it’s just the mental ability to step up in the game situation under pressure and make a play. And do it consistently,” Amonte Hiller said. “And until we get there, we’re not going to be able to compete against these top teams… We have the talent, we just need to have people step up.”

A more even performance on draw controls is on the top of the list for the coach going forward.

NU now travels to Milwaukee to face Marquette on Saturday.