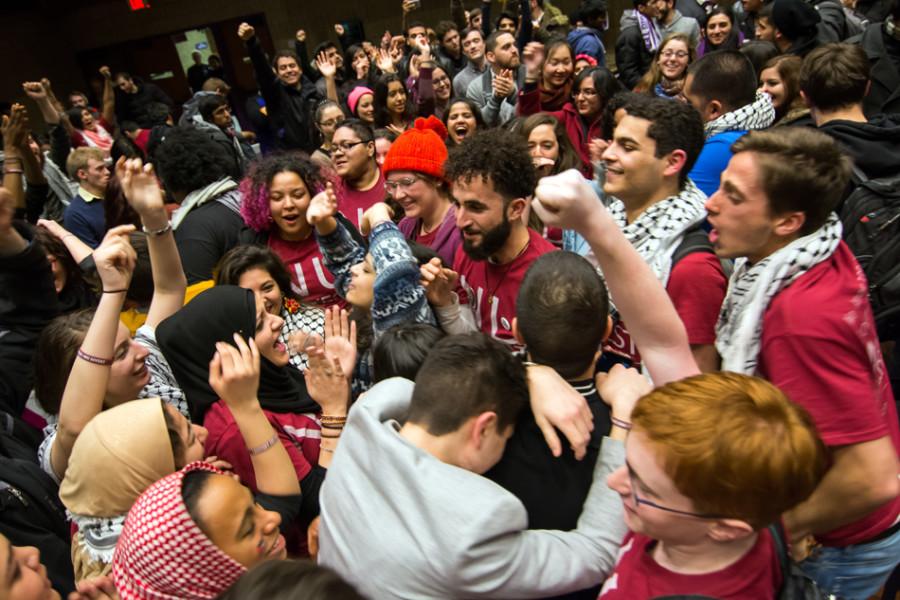 The resolution passed with 24 votes in favor and 22 votes against, with three abstentions. The vote, cast through a secret ballot, came after more than five hours of debate, during which senators, students and alumni alternated speaking for and against the resolution.

Attendees filled 400 seats in Norris University Center’s Louis Room to watch or contribute to the debate. An NUDivest supporter also live-streamed the meeting online. The video attracted about 300 viewers throughout the night, and the meeting caught the attention of activists around the country on social media.

Although Thursday’s vote represents a significant victory for NUDivest, the resolution is a recommendation to NU officials, not a University policy change.

Nevertheless, the passage is important for NUDivest, which has been campaigning since its launch last month for students to support divestment from Boeing, Lockheed Martin, Hewlett-Packard, G4S, Caterpillar and Elbit Systems. Divestment supporters say these companies’ products are used by Israel in human rights violations in Palestine.

Noah Whinston, an off-campus senator and NUDivest member who helped author the resolution, celebrated the vote amid a cheering crowd.

“The significance is what we’ve been saying this whole time — it’s about Northwestern being held accountable for supporting human rights violations,” the Weinberg junior told The Daily. “It’s a validation of so much work we’ve done. It’s just a culmination of all of the marginalized voices that we heard here speak tonight.”

The resolution also asks ASG to form an “investment transparency task force” to oversee investments. Currently, the University’s Investment Office does not release information on its investments.

The passage, which came just before 1:30 a.m. Thursday morning, ended an ASG meeting that began around 7 p.m., with debate on the resolution beginning just after 8:15 p.m.

The debate period included dozens of speakers who alternated one speaker for and one against, giving mostly two-minute statements.

Supporters and detractors largely sat on different sides of the room, reacting to statements they agreed with in silent gestures of applause and sometimes bursting into snaps.

Speeches on both sides ranged from calm pleas to heated calls for action.

McCormick senior Hagar Gomaa, who identified herself as Egyptian-American, addressed opponents of the resolution who said it made them uncomfortable.

“Discomfort is felt by every person of color on this campus,” she said. “We feel discomfort any time we bring up an unpopular opinion or voice a controversial issue. To those who say this divestment bill makes you uncomfortable, I say: Check your privilege.”

Those who spoke against the resolution focused mainly on NUDivest’s ties to the Boycott, Divestment and Sanctions movement, a strategy called for by Palestinian civil society.

Weinberg junior Nathan Bennett affiliated himself with NU Coalition for Peace, a group that opposes divestment and favors a two-state solution in the Israeli-Palestinian conflict. Bennett spoke against the resolution, voiced these concerns.

“NUDivest has linked themselves to BDS through their events, through their website and through the use of their handbook,” Bennett said. “If this bill does pass, it should be nakedly clear what it is, and that is a firm part of the BDS movement.”

NUDivest held a BDS workshop on Feb. 5 to educate students on the movement and to clarify misconceptions about it. NUDivest members stressed in speeches Wednesday night that the resolution focuses solely on divestment, not boycott or sanctions.

“If we allow this climate to persist, then it will be a long time before we can confront the issues that divide us,” Communication senior Josh Schwartz said. “This is the risk we run by passing the resolution: We risk putting a major obstacle in front of mutual understanding and empathy at Northwestern and in Israel and Palestine.”

Speaker of the Senate Noah Star, a Weinberg junior, required senators to vote through a secret ballot, a rarity in ASG meetings. Star said he wanted senators to feel comfortable casting whatever vote they deemed right, rather than abstaining due to pressure.

After the vote passed, Whinston told The Daily that NUDivest has no formal, immediate plans. But he said its next step is going to the administration.

This story was updated at 4:30 a.m. Thursday with additional information.