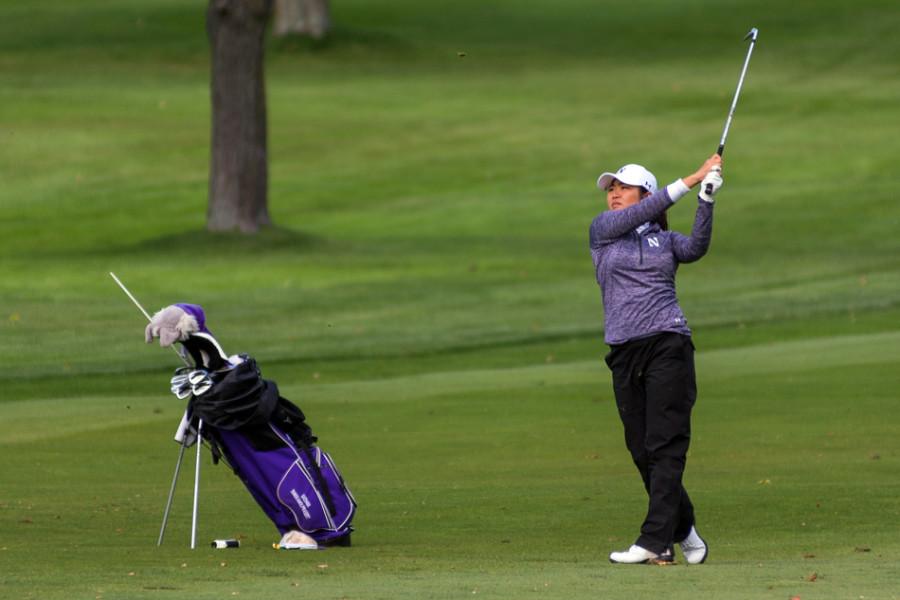 Suchaya Tangkamolprasert poses after an iron shot. The junior posted the lowest scoring average on the team in the fall but is just one of several talented NU golfers.

If Northwestern wished to remain under the radar starting in the spring, its mission has been accomplished.

The No. 7 Wildcats placed fourth on Tuesday at the Lady Puerto Rico Classic, finishing behind No. 4 Arkansas, No. 20 LSU and No. 33 Iowa State.

The showing wasn’t exactly stellar, based on NU’s ranking, but coach Emily Fletcher thought it was a good opening test.

“Overall it was a solid start for us,” Fletcher said, “I thought we were really close on the second and third days when we got off to good starts. We just threw a few more shots away coming down the stretch. But we’re very encouraged.”

The coach had spoken before the event about the balance NU needed to keep between birdies and bogeys — staying aggressive but making sure to produce more of the former.

For the most part, the squad kept that balance in control in Rio Mar, but a few loose shots tilted NU away from a higher finish.

The worst of it was on day one when the Cats finished the round tied for fifth at 8-over-par, a product of 22 bogeys or worse from the starting five.

NU actually produced that same number of offending scores during Monday’s second round and during Tuesday’s final round, but was able to counteract with enough red numbers to move the team up to fourth place in the end, just three spots out of a tie for second at 19 over par.

As for what the Cats could improve on after this performance, the focus was still on the shots around the hole.

“Our short game could get a little bit tidier,” Fletcher said. “A boost there could help us when we’re struggling from tee to green. We’re just a little bit inconsistent.”

Freshman Sarah Cho struggled in her first start with three rounds of 75 or worse for a 55th-place finish, and juniors Kaitlin Park and Suchaya Tangkamolprasert finished outside the top 25.

The savior was Hannah Kim, an unlikely source of prosperity heading into the competition.

“I was definitely worried that with practicing indoors, I was not seeing where my shots were going,” Kim said. “I was second guessing myself a lot and my swing wasn’t as consistent as I wanted it to be.”

It didn’t show outside the United States. Kim posted two solid rounds of 72 and 74 to start her tournament, sitting in a tie for 10th with 18 holes to play.

And then Kim exploded.

In an incredibly potent stretch on the back nine Tuesday, the freshman scorched the Rio Mar River Course with six birdies in seven holes. The insane stretch put Kim 5-under for the day, and she held on from there to post the day’s lowest round with a 4-under 68.

“My shots were on point and my putting was helping a lot during that stretch,” Kim said. “It was definitely unexpected.”

The performance netted Kim a Big Ten Golfer of the Week honor, and it marked the third consecutive event where Kim posted the team’s lowest score.

The first tournament of the spring uncovered nothing startling in NU’s makeup. Even if the Cats finished two places below where its ranking would’ve suggested, NU only dropped one spot in the polls.

And rankings aren’t the Cats’ benchmark for success anyway.

“For me, it’s if we’re playing the best to our ability,” Fletcher said. “Seven years ago when I started (at Northwestern) the 40th team in the country wasn’t even competitive with the top 10. Now you’re seeing teams who are ranked 25th or 30th and even if you’re in the top 10, it’s not a team you’re going to necessarily beat every single time. It’s more about did we beat ourselves? And we did that a little bit, we gave a few shots back.”