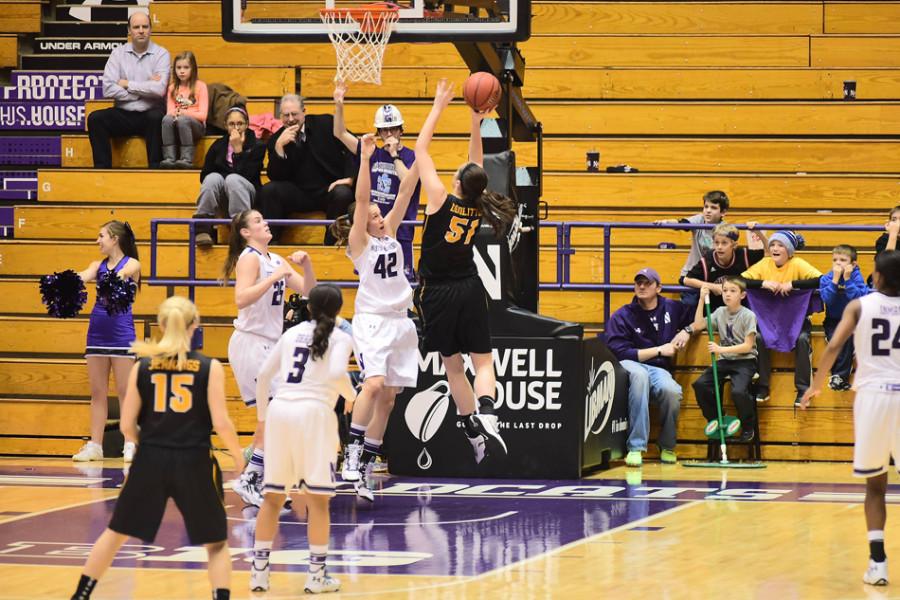 Karly Roser contests the shot. The senior guard has earned a starting role in sophomore guard Christen Inman’s absence and has done an admirable job as a fill-in.

After a couple of nail-biting road victories, Northwestern returns home in hopes of continuing its winning ways against No. 21 Nebraska.

The Wildcats (19-6, 9-5 Big Ten) look to stay undefeated in February and push their winning streak to six when the Cornhuskers (18-7, 8-6) visit Wednesday.

Although NU is in the midst of its hottest stretch of the season since its 10-0 start, Nebraska is attempting to right the ship. Before a win Sunday, the Cornhuskers were stumbling through a three-game losing streak, their longest of the season. The start of this decline can be traced back to the injury of starting junior guard Rachel Theriot.

Coach Joe McKeown drew parallels between what Nebraska is going through and what the Cats have dealt with in terms of the injury bug. McKeown applauded the rest of the Nebraska roster and said the Cornhuskers have been playing well without their leading scorer, despite not getting winning results.

“They’ve played really well without her,” McKeown said. “They’re balanced, you know. They can score, and their system is real solid. So the one thing about Nebraska, they really don’t beat themselves, regardless of who’s on the floor.”

NU might also be going without a key piece in this matchup. Sophomore guard Christen Inman has been sidelined the last three games with an ankle injury and her status for the Nebraska tilt will not be determined until Wednesday.

In Inman’s absence, senior guard Karly Roser has been inserted into the starting lineup, a role she has not had since her sophomore season. Roser is second on the team in assists and has been praised all season by McKeown for her ability to contribute in a plethora of ways. The best example of her versatility on the court was her first start of the season against Illinois, where she grabbed five rebounds, four of which were on the offensive end.

“I enjoy starting,” Roser said. “It’s not a big concern for me, but it is really nice to get out there and just try to start strong from the first tip. I liked coming off the bench a little bit, just bring that energy to raise us up to another level, but starting is fun. I get more hyped up in warm-ups probably.”

Although Roser’s ability to transition into the starting lineup has been big for NU over this current stretch, so has the play of sophomore forward Nia Coffey. The Cats’ leading scorer has taken her game to another level in February, and she will likely be a big factor in determining the outcome of this game. Coffey is averaging 16.4 points and 11.2 rebounds during the winning streak and has posted a double-double in all five contests. Coming off a 25-point 11-rebound performance, Coffey will most likely be asked to lead NU’s balanced scoring attack once again.

“She’s taking better shots,” McKeown said. “I think she’s done a really good job of playing in transition without getting herself into foul trouble with charges. And I think she just plays so hard you’re just glad she’s on your team.”

The Cats are ranked sixth in the conference and are one game ahead of Nebraska. Although this contest will have huge implications on NU’s postseason, McKeown said he does not think about that.

“I think more than anything else it’s really important that they focus on the next game,” McKeown said. “I think that formula has really helped us the last couple of weeks. So that’s how we are going to approach the next two weeks.”