Men’s Tennis: Hard road for Northwestern gets even harder against Illinois, Cornell 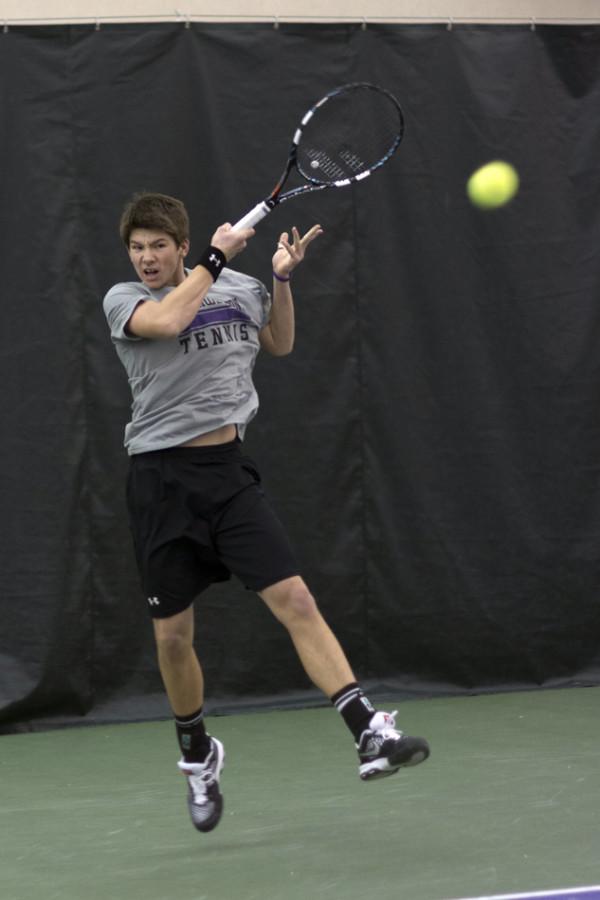 Strong Kirchheimer shows his game face in the heat of battle. The sophomore is Northwestern’s highest ranking singles player at No. 64 in the country.

Northwestern has lost its last 20 matches against state rival Illinois.

But coming off an impressive three-win weekend, the No. 26 Wildcats (6-4) hope to turn a new leaf as they kick off their long-awaited conference season Friday at No. 6 Illinois before continuing their absolutely brutal non-conference schedule at No. 64 Cornell on Sunday.

The Fighting Illini (8-2, 1-0 Big Ten) are one of the big shots of the Big Ten. Illinois has made it to the finals of the Big Ten tournament two of the past three years, losing to the Buckeyes in 2014. Illinois captured the title in 2012 and three players from that memorable 4-3 victory over Ohio State, Farris Gosea, Ross Guignon and Tim Kopinski will play against NU. Guignon and Kopinski also form the 11th-best doubles team in the country.

But the Fighting Illini are loaded up and down the roster. The squad boasts five players in the top 70 in singles, while the Cats only have one – sophomore Strong Kirchheimer at No. 64.

“(Illinois) has put together a quality team,” coach Arvid Swan said. “We know we’re going to have to play at a high level. They have several high-ranked players at the top of the lineup and a couple talented freshmen so we need to be ready to go.”

The Cats will look for every advantage they can get. Illinois’ Atkins Tennis Center is known to have a raucous atmosphere and brings fans out in droves. NU has been having practices start with the Illinois fight song blasting on the speakers to get players ready. Assistant coach Chris Klingemann said he doesn’t know if it actually helps, but it certainly doesn’t hurt.

“It’s just to pump us up because we’re going to hear that every single second over there,” senior Alberto Zanotti said.

NU, though, is in its best position in years to pull off the upset. The squad has honed its skills against the toughest non-conference schedule in recent memory, with four wins and several close losses over ranked opponents already under its belt. The Cats are riding high on a four-game winning streak and seem to be hitting their stride.

NU will also continue its remarkable string of non-conference foes when it travels to Ithaca, New York, to play Cornell (3-4), a feisty team that has managed to hold the No. 64 spot despite a sub-.500 record.

Doubles play will be paramount if the Cats hope to pull off the sweep. With more moving parts, doubles is a more fluid game with increased variability. Especially against such tough competition, the doubles point is crucial in alleviating some of the pressure from the singles players, and it would be exceedingly difficult for NU to overcome a 1-0 deficit through singles play.

The Cats say their goal is to win the Big Ten tournament. To prove they have what it takes, they have to start this weekend by overcoming years of precedent.