Point/Counterpoint: Can Northwestern get to four Big Ten wins? 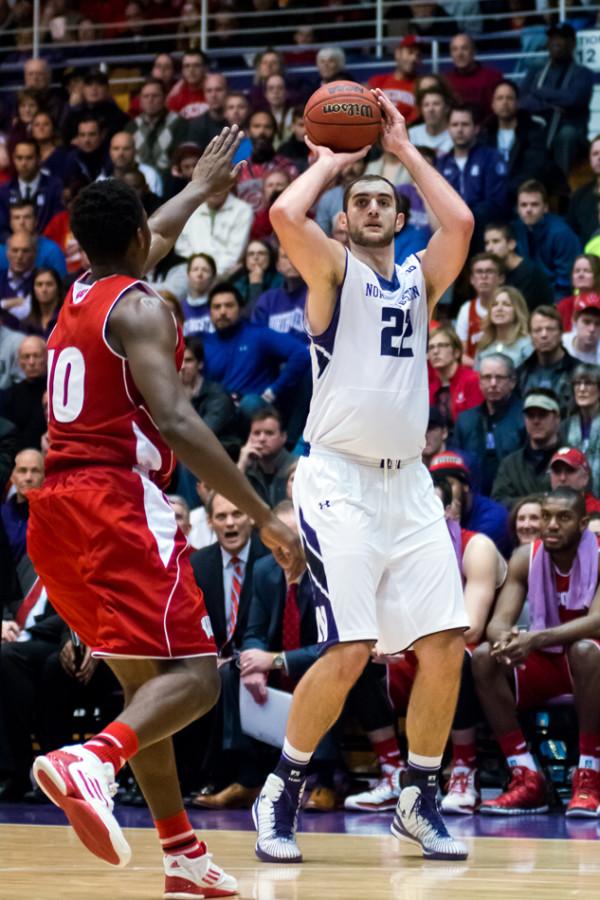 Alex Olah pulls up for the 3-pointer. The junior center posted a double-double in Northwestern’s 66-61 overtime win against Iowa and could be a key figure in deciding whether the Wildcats reach or eclipse four conference wins.

Kevin Casey: The basis of this question comes from kenpom.com’s prediction that NU’s most likely outcome is finishing the conference season 4-14. Currently NU is 2-10 in the Big Ten, meaning the team has to double its Big Ten win total in the final six games of conference season to match that set mark.

And if NU wants to reach five Big Ten wins, it must play .500 ball in the remainder of the conference schedule.

I don’t see either of these scenarios happening.

The Cats have already pushed through the brutal part of its Big Ten competition. In the team’s first 12 conference games, it faced seven top-40 opponents in kenpom.com’s rankings, but only sees one such foe in the final six.

Sure the Cats had a long string of close losses against some of the Big Ten’s best opponents last month, but that was NU playing near its peak. In the past two weeks, we’ve gotten a glimpse of who the Cats really are: a young squad still trying to find its way out of the Big Ten cellar.

NU has proven recently that the Big Ten’s better teams are far too much for them to handle (with the Iowa performance being the anomaly).

NU faces four such squads, all ranked top-57 nationally by kenpom.com, in its final six conference games. If the Cats capture any of these contests, it will be a major surprise.

That leaves NU needing to win its other two games to reach 4-14 in conference. The Cats have the firepower to beat Michigan or Penn State, but defeating both seems like a stretch. Both are better teams than NU, and even a home environment for the Cats in each matchup isn’t enough to convince me of a sweep.

NU takes one of those matchups for its third conference win, but that’s where the Cats’ conference victories for the year come to a halt.

Jesse Kramer: NU finally ended its 10-game losing streak Sunday against Iowa, which is important because that game marked the start of a favorable seven-game stretch to end the regular season.

Half of the Cats’ six remaining games are at home. All three of those opponents are teams that struggle on the road.

Kenpom.com slightly favors NU over a Penn State team that has not won a Big Ten road game since last March. (Of course, that victory last year came against NU at Welsh-Ryan Arena.)

NU is a projected favorite March 3 against Michigan, which is 2-6 since losing star guard Caris LeVert to injury. The Wolverines’ only road win without LeVert came against last-place Rutgers.

Indiana is a more difficult matchup with its high-powered offense. The Hoosiers have beaten mediocre teams Nebraska and Illinois on the road.

NU is worse than both those teams, so the Hoosiers deserve to be a favorite when they visit Evanston.

However, a 2-5 record in road games leaves room for an upset.

The Cats should win two of these three games, and it’s possible they win out at home.

NU has to travel to hot Minnesota and Illinois squads and rematches down-trending Iowa in the regular season finale.

If the Cats give inspired performances like the one Sunday, maybe they can steal one on the road.

With this fairly favorable finish to the season, a total of four Big Ten wins should be the minimum, with five being extremely possible.