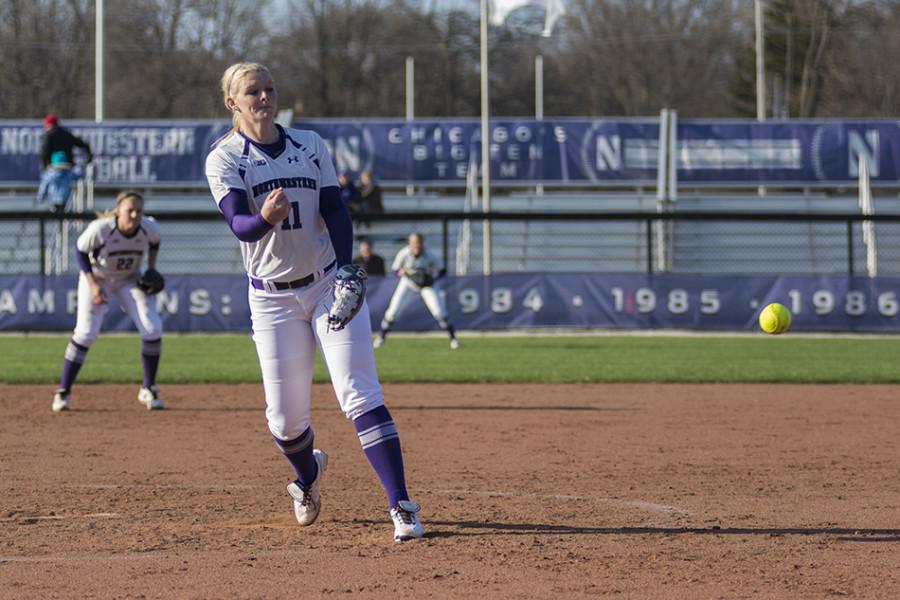 Kristen Wood releases the pitch. The junior has been an ace in her last two starts, keeping no-hitters into the fifth inning each time.

After a successful 2014 campaign that saw Northwestern finish with a 35-18 record overall and a 14-9 mark in conference play, the Wildcats are back and hungry for more.

NU made it all the way to the NCAA Seattle Regional last season, winning two of three games before falling to No. 8 Washington. The Cats have gotten off to a slow start this year, sitting at 3-6 after two weekends of play, but coach Kate Drohan is confident her team can mount another strong campaign.

“We don’t have the results we want yet,” she said. “But if we keep our eyes on the ball and stay on the process, we’ll be that team.”

There’s still more than a month to go before Big Ten play begins, meaning NU has plenty of time to tune its roster before the most important stretch of the season. Drohan said she once again expects the squad to be “very, very competitive” in its conference matchups.

Early season experimentation will be a key part of any late success for the Cats, as Drohan also stressed that depth and versatility are two of the team’s greatest strengths.

“Depending on the matchup … we have a lot of people coming off the bench that can make a huge impact on the game,” she said. “We’ve used a lot of different combinations, defensively and in the batting order.”

But even with the flexibility that a strong bench affords, star power will still need to reign supreme. NU will have to find a way to replace the bat of graduated centerfielder Emily Allard, who was the Cats’ top offensive threat last season with 52 runs, a .394 batting average and 37 stolen bases in 39 attempts — all team highs.

Senior right fielder Andrea DiPrima and junior second baseman Brianna LeBeau will attempt to pick up the slack in the batting order. DiPrima was third in batting average a year ago and hit 12 doubles over the course of the season. She’s off to a similar start this year, batting .348 with 8 RBI.

LeBeau was far and away the Cats’ top slugger in 2014, belting 11 home runs en route to 100 total bases and a .690 slugging percentage — all team highs. She hasn’t had a hot start to this season, batting just .208, but remains a constant threat at the plate.

On the mound, NU is buoyed by the return of ace pitcher Kristen Wood. The junior was a workhorse for the team last year, appearing in 37 games and tossing 184 innings, more than half of the Cats’ total 332.2. Wood hasn’t missed a beat to start 2015, already taking two no-hitters into the fifth inning in NU’s early season action.

The pieces for another winning season are in place, and Drohan believes achieving success is just a matter of assembling the puzzle.

“It’s all about us playing a complete game, and I think all aspects of our game can be better,” she said. “I have a lot of faith in our team’s ability, and I really think the execution will come.”

NU’s 3-6 record isn’t intimidating any opponents at the moment, but don’t count out the Cats once May rolls around.