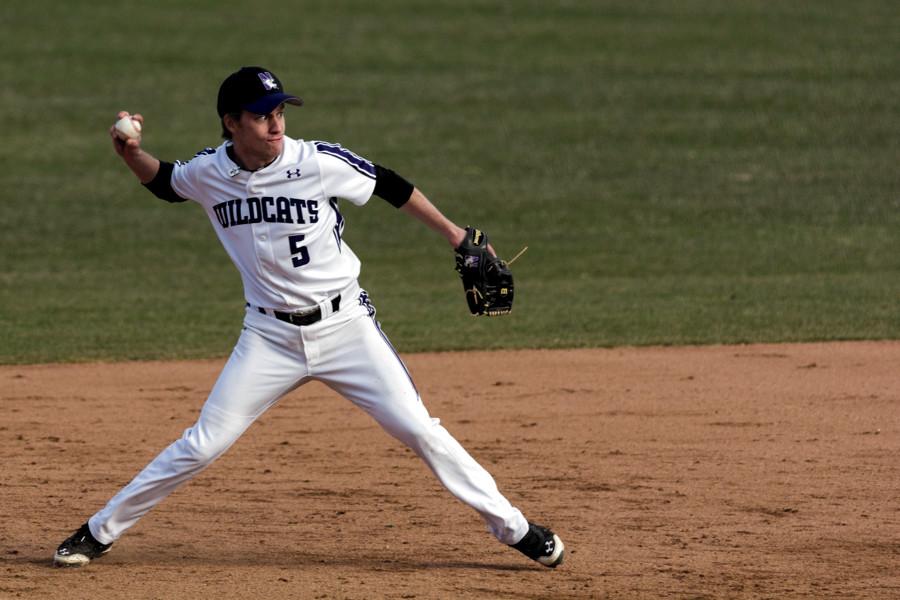 The trio of seniors Scott Heelan, Cody Stevens (pictured) and Kyle Ruchim appear set to lead the Wildcats in 2015, barring any setbacks. Stevens isn’t sure of the position he’ll play, but his versatility is a part of his strong fielding ability.

All three have been on the field together in two of those contests.

When Stevens and Ruchim were freshmen in 2011, Heelan played at Virginia Tech. In 2012, when Stevens and Ruchim were sophomores, Heelan sat out before transferring to NU. When Heelan arrived in 2013, Stevens missed the season due to a life-threatening head injury. The trio finally took the field together the first weekend of the 2014 campaign, until Ruchim left game two with an arm injury, opted for surgery and missed the rest of the season.

The great reunion (or, really, union) of 2015 was delayed when the NCAA suspended Ruchim six games for an issue involving an MLB Draft adviser.

Ruchim will sit out the first three games of this weekend’s Irish Alamo Invitation before finally suiting up for the final contest on Sunday.

With Heelan, Ruchim and Stevens all in the same lineup — buttressed by sophomore outfielders Joe Hoscheit and Matt Hopfner and junior first baseman Zach Jones — the Wildcats (0-3) could produce more offense than they have in years.

“I don’t think we really set a lot of concrete expectation,” Ruchim said last week. “We know we can improve a lot as the season goes on, but the sky is the limit for us.”

Heelan, Ruchim and Stevens all offer some degree of versatility. Ruchim and Stevens have played both middle-infield positions at NU as well as center field, and Heelan, a catcher, took over second base last season after Ruchim’s injury.

This year, Heelan will be the starter behind the plate, but Ruchim and Stevens said they have no clue where they’ll get most of their playing time. Last weekend, Stevens started two games at second base and one in center field and also got some time at shortstop. Cody said his favorite position is “on the field,” and coach Paul Stevens said he’s a better outfielder than infielder. The coach said he expects Ruchim to start at shortstop when his suspension ends but that he could find himself all over the field.

Although Cody Stevens is no easy out in the batter’s box (.278 batting average, .337 on-base percentage in 2014), most of his value derives from his sharp fielding.

Heelan and Ruchim, on the other hand, can be some of the Big Ten’s best hitters this year. Heelan has led the team in on-base percentage (minimum 100 plate appearances) each of the past two seasons, while batting .366 in 2013 and .317 in 2014.

Ruchim provides more power, having easily led the team in doubles, triples and slugging percentage when he was last healthy two years ago. He was drafted by the St. Louis Cardinals in the 39th round of last summer’s MLB Draft but chose to return to school for one more season.

“In my estimation he would be one of the top hitters in this league,” Paul Stevens said.

Both Heelan and Ruchim (along with senior starting pitcher Brandon Magallones) were named preseason Big Ten Players to Watch.

Cody Stevens resisted the suggestion that the trio of veterans would assume leadership roles within the team, saying, “We don’t have definitive leaders right now. We have people who set an example, whether those are seniors or freshmen.” Still, not every team has a core as experienced as these three.

If the Cats remains generally healthy, they could improve drastically on last season’s 19-33 record. And barring yet another derailment, Stevens, Heelan and Ruchim will be leading that improvement together.