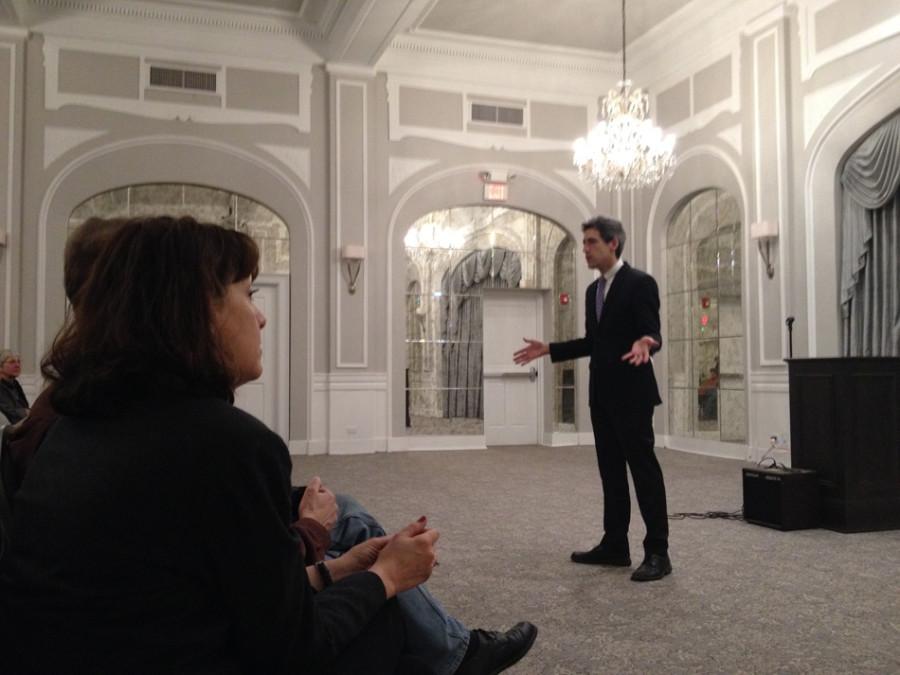 State Sen. Daniel Biss (D-Evanston) discusses state retirement policy with community members. The event was co-hosted by MidLife Ventures, a non-profit for seniors, and the Merion, a luxury home for seniors.

MidLife Ventures, a nonprofit that provides information and educational services for seniors, and the Merion, a luxury senior living home at 1611 Chicago Ave., co-hosted the talk at the home.

Stacey Foisy, co-founder of Midlife Ventures, introduced the state senator and spoke about how imperative the discussion was.

“If our state was a person that came to us in crisis we’d have our work cut out for us,” she said.

Biss spoke in opposition to Gov. Bruce Rauner’s proposal to transition public workers’ pension plans to 401(k)s, which several states have attempted. The 401(k) proposal, which Rauner spoke about in his first State of the State address on Feb. 4, removes the assurance of collective power in public workers’ pensions and destabilizes retirement security, Biss said.

“The 401(k) experiment has gone on for years and the jury’s in: It doesn’t provide retirement security,” Biss said. “Let’s not intentionally replicate the errors of states that have done it wrong.”

The future of the Illinois pension system is uncertain, Biss said. In March, the state Supreme Court will review the 2013 pension reform law that was deemed unconstitutional by a trial judge in November. Attorney General Lisa Madigan filed an appeal for the case.

The pension reform law seeks to restructure pension guidelines and ease the $110 billion pension debt that the state faces.

“For years the state didn’t pay what it needed to in order to pay for (pension) systems,” Biss said. “We haven’t built structures that make it easy to provide retirement.”

Biss sponsored a bill passed in December that created the Secure Choice Savings Program. The plan automatically provides each worker statewide with a retirement account if they do not already possess one. It is the first of its kind in the country. The policy deducts 3 percent from employee’s incomes and puts it into their retirement accounts manually, unless they opt out.

Community members who attended the talk were specifically concerned about how teachers’ pensions would be managed.

The Illinois Teachers Retirement System is between $50 billion to $60 billion in debt, Biss said. Teachers could face increased pension cuts if reforms are not made.

Nan Anderson, a chairperson for the AgeOptions Advisory Council, works with the Illinois senior population and spoke hesitantly about the future of retirement funding.

“(Biss) has done a good job of putting forth reasonable legislation,” she said. “But we’re handicapped by the constitution which doesn’t allow for a graduated income tax.”