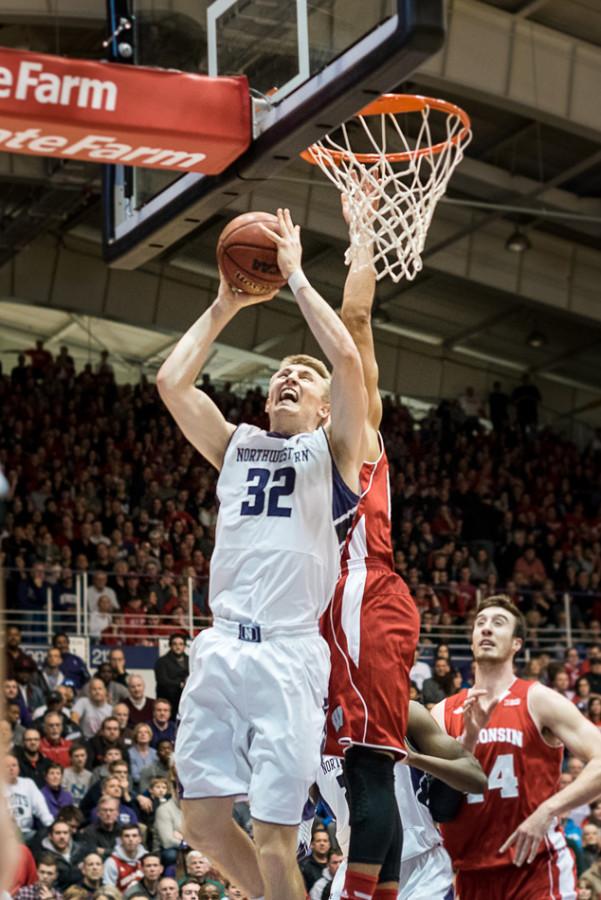 Nathan Taphorn goes in for the contested layup. In his return to the lineup, the sophomore forward hit a clutch 3-pointer with less than a minute left, part of a robust bench effort that was key to a Wildcats victory.

Northwestern finally did it.

Heartbreak turned to despair as the Wildcats (11-14, 2-10 Big Ten) lost nail-biters, blowouts and everything in between during a 10-game losing streak, but NU returned to the win column Sunday at Welsh-Ryan Arena with a thrilling 66-61 overtime victory over Iowa (15-10, 6-6).

“I’m a believer in the basketball gods. I always have been,” coach Chris Collins said. “I got that from Coach K. … They can be good to you when you really deserve it.”

The Cats held a lead at halftime, and despite temporarily relinquishing it during the second half, they were up by 3 for Iowa’s final possession of regulation. With just three seconds on the clock, Hawkeyes junior forward Jarrod Uthoff heaved a contested desperation shot from beyond the arc that somehow found its way through the rim to send the game to overtime.

“We played that exactly like we wanted,” Collins said. “Give the kid credit, he’s a great player.”

At that moment, another victory seemed to be slipping through NU’s fingers, but Iowa couldn’t keep the shooting magic going in overtime against the Cats’ stout defense. The stat of the game for NU was the team’s incredible 12 blocked shots, five of which came from junior center Alex Olah. The big man also contributed 11 points and a game-high-tying 13 rebounds to tally a double-double.

NU spent much of the game running a 2-3 zone on defense, a look the Cats have turned to for stretches this season but have never run consistently for a full 40 (or 45) minutes. The change-up worked, with NU holding the Hawkeyes to 8-of-24 from beyond the arc and preventing star Iowa forward Aaron White from leveraging his skill set in one-on-one matchups.

“Love it. We won, so what’s not to love?” Olah said of the zone defense. “It slows down the offensive team. … We keep everything out of the paint. As a defender, it allows me to see everything.”

White, who leads the Hawkeyes in scoring with 15 points per game, was held to just 6 on 1-of-12 shooting from the floor. Overall the team shot 32 percent, with 25 of its 61 points coming from Uthoff.

The Cats had an unlikely performance of their own from sophomore forward Nathan Taphorn, who returned to the lineup after missing the last seven games. He made limited contributions in just 13 minutes played but helped to bolster the depth of a rotation that is still without senior guard JerShon Cobb and made a clutch 3-pointer with 45 seconds left in regulation to put NU up by 2.

But perhaps the most surprising player of the game was freshman forward Gavin Skelly. NU has lacked a true backup center all season, and when junior Alex Olah picked up his third foul less than two minutes into the second half, Collins called on Skelly for a crucial seven-minute stretch. The freshman delivered, and Olah certainly seemed to benefit from the extra rest.

“(Skelly’s) minutes in the second half after Alex got his third foul really uplifted us,” Collins said.

It was the usual suspects on offense for the Cats, with freshman guard Bryant McIntosh scoring a team-high 18 points and junior guard Tre Demps trailing him with 16. Demps made some big shots as NU struggled to get anything going on offense, and Collins applauded both guards for strong play in the face of heightened defensive attention.

The coach was even more impressed with the effort and resilience his team showed in a tough game, saying the Cats bought into a clean-slate mentality and didn’t get down the way they did in similar close contests earlier this season against Michigan State and Ohio State.

“The looks I saw in the huddle at the end of regulation were different,” Collins said. “They were determined.”

The Cats return to action Wednesday at Minnesota.