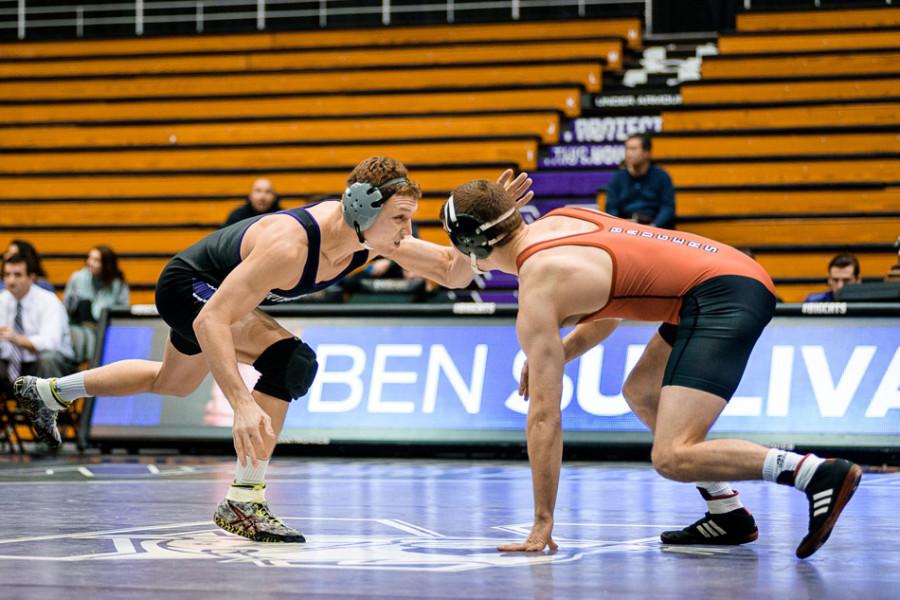 Pierce Harger goes on the offensive. The senior captured his 100th career victory as a Wildcat on Friday with a pin against Maryland.

The feel-good story played out to perfection on Friday against Maryland.

In his final home meet ever, on senior night in front of his family and friends, Pierce Harger earned his 100th career win — doing so by pin — and led the Wildcats (10-8, 2-7 Big Ten) to their first dual meet victory in almost a month.

Harger’s crucial pin was part of a robust effort from the Cats on Friday, as Northwestern defeated the Terrapins (5-15, 0-9) 26-18 at home.

From the start of his match against Maryland’s T.J. Guidice, Harger looked eager to put on a show. The 165-pound senior jumped out to a quick 7-1 lead in the first period with two bulldozing takedowns and a near-fall before scoring 5 more points in the second with a reversal and another near-fall. Up 12-1, Harger finally put an end to Guidice’s misery with the pin.

For Harger, reaching this milestone the same night he was honored for four years of service to NU was almost a surreal experience.

“I had someone tell me in high school that I’d be a good addition to the practice room here at Northwestern,” he said, “so to get 100 wins now, to be an All-American last season and hopefully do it again this season is pretty special.”

But Harger entering triple-digits was not the only story from the night. The team collectively put together its best showing in weeks on Friday. Although the 26-18 score may look close, it doesn’t do NU’s dominant outing justice.

The trio has struggled to pick up wins all Big Ten season, much to coach Drew Pariano’s frustration. After all, NU’s inability to win bouts outside of its four ranked wrestlers (No. 3 sophomore Jason Tsirtsis at 149 pounds, No. 7 Harger at 165, No. 16 senior Alex Polizzi at 197 and No. 4 senior Mike McMullan at heavyweight) was a key factor in the team’s 1-7 conference record heading into the night.

But commanding performances from White, Malone and Oster against the Terrapins helped the Cats to overcome their four-match losing streak.

“At the start of the match, (athletic director Jim Phillips) asked ‘How’s this match gonna go?’” Pariano said. “I told him, ‘Those first three matches are extremely important. If we win those first three, we’re going to be in a pretty good spot.’”

Pariano’s prediction came true, as the early 9-0 lead propelled NU to victory. Malone’s 5-3 win over No. 20 Geoffrey Alexander at 133 particularly stood out, not only because he beat a ranked foe, but also because he avenged his loss to Alexander at the Midlands Championships.

Tsirtsis followed and turned in one of his strongest outings of the season — clearly making a deliberate effort to be more aggressive and offensive — with a tech fall over Ben Dorsay, extending the Cats’ lead to 14.

Still, the Terrapins entered halftime within striking distance. Sophomore Ben Sullivan was pinned at 157 by Lou Mascola, handing the Terrapins 6 points. Because NU continued to forfeit a weight class at 174, the team essentially only led by 2 heading into the break.

Luckily for the Cats, Harger was their first wrestler on the mat in the second half. His fall and the succeeding forfeit brought the score to 20-12.

Redshirt freshman Mitch Sliga followed at 184 and continued the good vibes for NU by notching his second career Big Ten victory with a 6-2 decision over Tony Gardner.

But the night’s biggest surprise came at 197 when Polizzi experienced a less joyful senior day than Harger. He was pinned by Rob Fitzgerald just one minute into the last match of his career at Welsh-Ryan Arena.

Still, NU’s third senior starter, McMullan, closed out the night and his final home match with a 4-2 victory over No. 12 Spencer Myers, his 92nd career win.

“I’ve been here for it seems like forever,” McMullan said. “It’s really crazy that it’s come to an end, but I’m just grateful that I was blessed with an opportunity to compete in the Big Ten Conference for a fantastic school like Northwestern.”