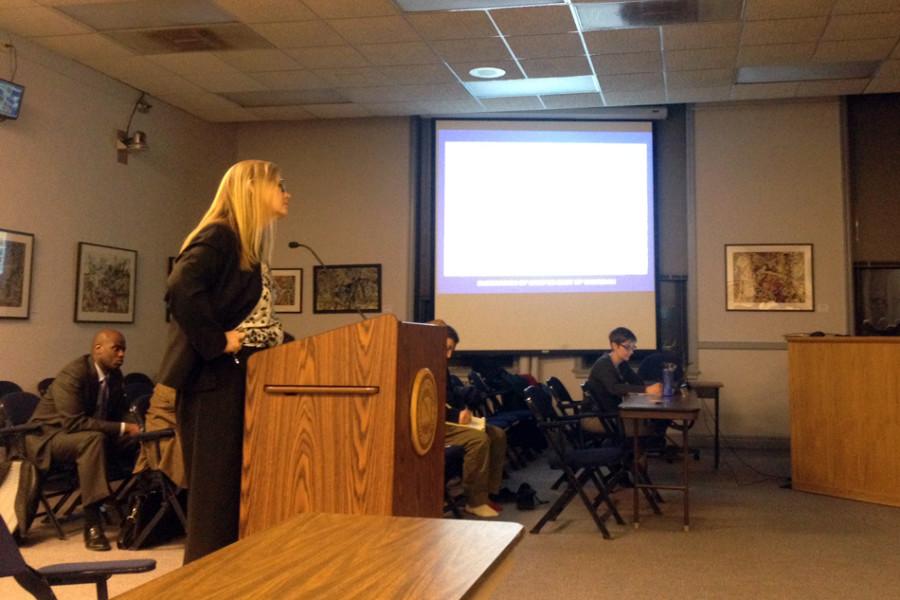 Bonnie Humphrey, director of design and construction, defends Northwestern’s proposal for resubdividing the campus. The Evanston Preservation Commission evaluated the plan that would redraw the lines of Northwestern’s landmark status areas.

The Evanston Preservation Commission heard a proposal Tuesday from Northwestern to alter the zoning boundaries of areas of campus east of Sheridan Road.

Officials discussed two of the lots that make up NU’s campus. Of the two lots in question, the eastern lot is the Lakefill, which contains no landmarks. The western lot, between Sheridan Road and the Lakefill, is considered a historic district although only 12 of its 58 buildings maintain landmark status. The proposal suggests restricting protected landmark zones to smaller areas that more closely surround the landmark buildings.

The University hopes to expedite bureaucratic roadblocks caused by the large landmark zone that currently exists, Humphrey said. In its current state, the zoning boundaries force the University to meet with the commission to fix something as small as a window in a non-landmark building, she said.

“As a major institution of higher education, it is the essential character of the University to look forward to the designing of new buildings, not to serve simply as a mirror to the past,” Humphrey said. “The proposed subdivision serves to preserve and protect landmark buildings and provides flexibility to accommodate the organic growth of the University.”

Some members of the commission expressed doubt about the University’s motives, calling the proposal “disingenuous.”

“I do not especially want to see any more examples of NU’s current thinking in architecture,” Evanston resident Bruce Enenbach said, “which in my humble opinion has been pretty abysmal.”

Commission members were concerned with some of the boundaries proposed, specifically in the proposed lot that contains Lunt Hall and Swift Hall.

The University drew the boundary in anticipation of future plans to move Lunt Hall, which was built at a non-perpendicular angle from Sheridan Road, Humphrey said.

Specifically, the commission was concerned with how redrawn boundaries would allow for the preservation of landmarks in the future.

“You’re preventing buildings like Tech from gaining landmark status in the future,” vice chair of the commission Jack Weiss said. “History does not stand still in preservation.”

Members of the community and commission alike expressed concerns over visibility of the campus landmarks from Sheridan Road.

“These proposals seem to come from the inside of campus looking out, not the outside looking in,” Evanston resident Richard Weiland said.

Commission members expressed many doubts about the viability of certain points of the proposal moving forward but did not come to any conclusions.

The commission will vote on the proposal at its next meeting on March 4.