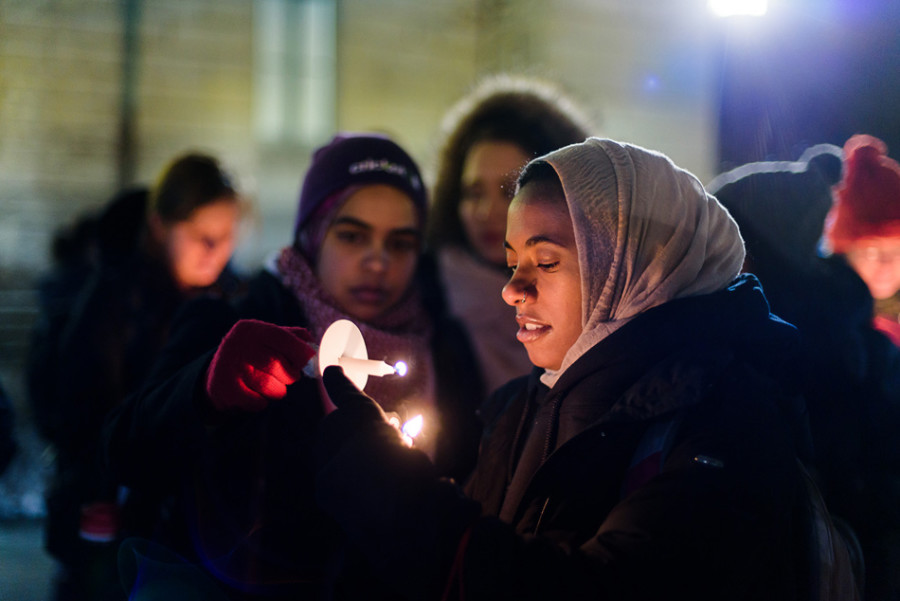 Students light candles before a vigil at The Rock on Wednesday. The vigil, hosted by the Muslim-cultural Students Association, was held in honor of three Muslim students who were fatally shot in Chapel Hill, North Carolina, on Tuesday.

More than 80 members of the Northwestern community gathered at The Rock on Wednesday night to commemorate the lives of the three Muslim students who were fatally shot Tuesday in Chapel Hill, North Carolina.

The three students, Deah Barakat, 23, his wife Yusor Abu-Salha, 21, and her sister Razan Abu-Salha, 19, were all shot in the head. Craig Stephen Hicks, 46, has been arrested in connection with the shooting.

The vigil, hosted by the Muslim-cultural Students Association, began with a recitation and translation from the Quran.

“The Quran signals that these people are not dead,” said Tahera Ahmad, associate chaplain and director of interfaith engagement. “They are very much alive, and they are going to continue their legacy.”

“I think we need to start thinking about how we can make positive impact like Deah Barakat did, his wife and his sister-in-law as well,” she said.

AbdelRahman Murphy, an imam, said when he was invited to NU to participate in programs with McSA, he didn’t expect to be attending a vigil. A friend of Barakat, Murphy said although the deaths were tragic, the pain the community feels is good because it means people have not grown apathetic.

“This reminds me of the tradition of the Prophet Muhammad where he teaches us something very valuable,” he said during the event. “Terrible events and tragic events can still cause and catalyze change … Their existence ending on this planet can catalyze positivity for the rest of humanity.”

Medill sophomore Zahra Haider spoke about the similarities between herself and the victims.

“When I look at Razan, I see myself,” Haider said. “She was 19 years old, bravely wearing hijab, passionate and ambitious. All three of them now lie dead at the hands of a 46-year-old white male.”

As a journalism student, Haider said she was “disappointed” in how the media chose to report or not report at all on the attack. She said negative opinions of Islam in the United States cause an association of the religion with violent acts, like the January attack at the offices of the French satirical magazine Charlie Hebdo.

“Sorry to disappoint you, but we are not Charlie, we are not the faces you see on TV, we are not terrorists,” she said. “I’m sorry to say that you’re wrong, because we are Yusor, Deah and Razan. We are them and they are us.”

Sofia Sami (Weinberg ’14) described learning about the attack and recounted her experiences growing up as Muslim.

“I saw my childhood, I saw bits and pieces of my own identity, and I saw it being gunned down over and over and over again,” Sami said. “Some days I’m scared, and I don’t understand it sometimes.”

The vigil was then opened up for attendees to share their thoughts and feelings about the attack. Some became emotional when they told their own stories.

The event was followed by a continued conversation at Parkes Hall at 9:30 p.m.