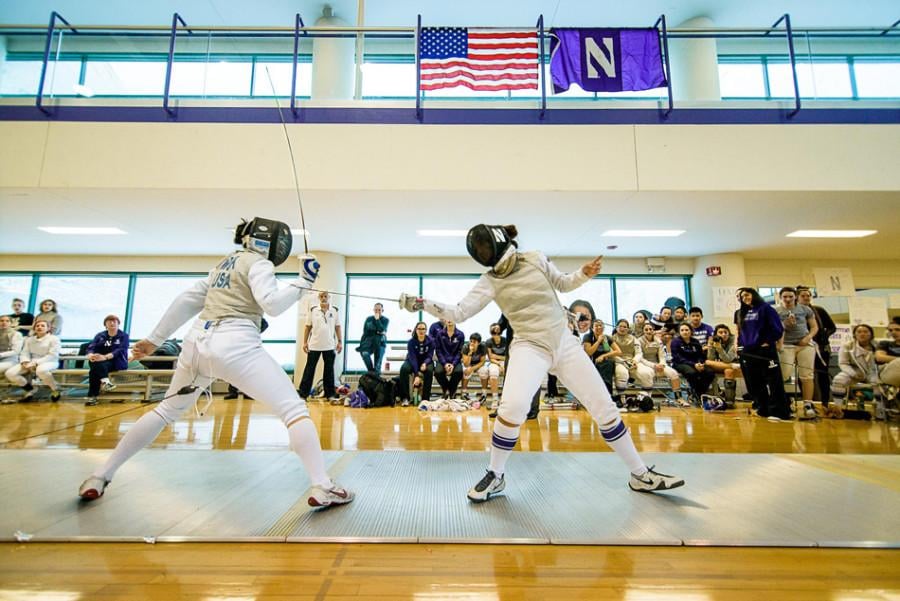 Stella Pointeau (right) lands a strike on an opponent. The freshman foil was undefeated in her first six matches of the season.

In the lead up to Northwestern’s pair of bouts in North Carolina, sophomore sabre Alisha Gomez-Shah was looking for two 17-20 point efforts from her squad. Mission accomplished.

The No. 7 Wildcats (38-7) rolled into the Duke Duals on Saturday and cruised to a pair of victories over North Carolina and the hosting Blue Devils. NU took care of the Tar Heels 19-8 and followed it up with a 20-7 thrashing of Duke.

In the aftermath, coach Laurie Schiller was highly satisfied with the effort. The Cats had already beaten both teams by similar margins earlier this year, but this time felt different.

The Tar Heels were hot and defeated Duke later in the day 16-11, making NU’s margin that much more impressive.

As for the Blue Devils, NU beat them by one more point than in the first meeting a month ago, but the improvement in the Cats’ performance was greater than the score indicated.

“The score against Duke is marginally different, but we dominated Duke more so than we did at Air Force,” Schiller said. “In foil, there were four 5-4 bouts at Air Force, but I don’t think there were any on Saturday. We really dominated their foil and epee squads this weekend.”

Indeed, against the Blue Devils, foil and epee held serve, winning their matches 8-1 and 7-2, respectively.

Schiller iterated that the Cats easily could’ve swept Duke 9-0 in epee. The coach pointed to epee Juliana Barrett’s performance specifically in achieving the successful result. The junior won all three of her bouts against Duke.

Foil Jen Yamin, who is also a Daily columnist, also was 3-0 in her battles against the Blue Devils. The junior said the team’s sense of urgency against Duke was up from the start, despite the opponent’s unranked status.

“We always get extra focused for Duke because we lost to them, and that was something we hadn’t really done ever,” Yamin said. “Knowing that their sabre and epee squads are a bit stronger, foil knew that we had to step it up, and we did.”

As for the North Carolina match, Yamin also went 3-0 in that contest, on the way to a team 6-3 win in foil. Sabre conquered by the same margin, and epee beat the Tar Heels 7-2, on the backs of a combined 5-0 showing from junior Helen Foster and sophomore Mandeep Bhinder.

Schiller has been somewhere between satisfied and impressed with his team’s performances this year, and cumulatively, that means a sense of progression.

“Our record is marginally different than the results last year,” Schiller said. “But in terms of the teams we’ve lost to and the teams we’ve beaten, this year is a much better result.”

Four freshmen will head to the USA Fencing Junior Olympics this weekend, and NU will next resume competition at the all-important Midwest Fencing Conference Championships on Feb. 21.

The shot at a title crown has been on the Cats’ minds for much of the winter already, and their focus isn’t swaying.

“At conference, we’re going to be fencing opponents where mistakes aren’t really allowed or acceptable,” Yamin said. “It’s just getting in the mindset of not allowing ourselves to make mistakes. This past weekend at Duke, we could make mistakes and still win. But at conference, making mistakes will not be good.”

Correction: A previous version of the photo caption accompanying this article misstated the name of the fencer in the photo. Her name is Stella Pointeau.