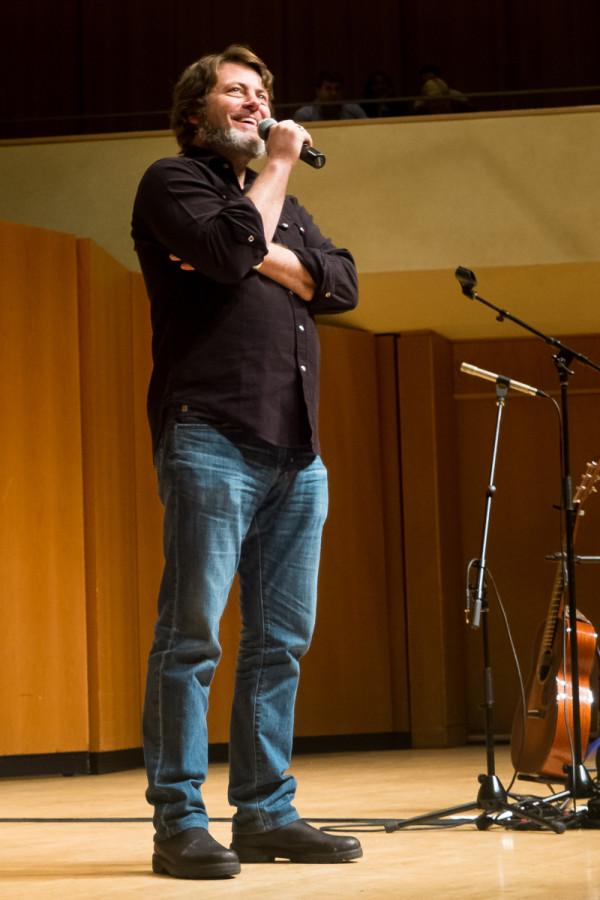 Actor and comedian Nick Offerman speaks at Pick-Staiger Concert Hall on Saturday night. Offerman discussed his woodworking hobby and political beliefs, and interspersed his talk with songs on a homemade ukulele.

Offerman, who plays Ron Swanson on the sitcom, sang a song from the series eulogizing the horse at the end of his talk at Pick-Staiger Concert Hall. Nearly 1,000 students packed into the venue to see Offerman’s sold-out show.

The comedian, who visited NU as A&O Productions’ winter speaker, appeared without his character’s signature mustache.

“They were paying mostly for the mustache,” he joked.

Offerman characterized his talk as having “momentum just shy of a bull in a china shop” and told explicit sexual jokes throughout the night, prompting shocked and raucous laughter from the audience. The rest of his remarks, ranging from discussions of his love of woodworking to personal stories and his political beliefs, were peppered with humorous songs Offerman sang while playing a homemade ukulele.

He touched on his connections to NU in his opening, sharing anecdotes about an old relationship he had with an NU student when he was working in the Chicago theater scene.

Offerman’s wife, actress and occasional “Parks and Rec” guest star Megan Mullally, also attended NU for over a year in the late 1970s, “if you can imagine such a time.” Offerman paused in his talk to perform a pun-filled song he had written for her.

The actor discussed his desire to be independent from technology, criticizing Americans for developing a “softness” after acquiring many “luxurious” gadgets. He also deadpanned the roles that he imagined strangers on an El car would need to play in an apocalyptic scenario.

“You have to think about these things, guys,” he said to a laughing crowd. “You’re adults now.”

Offerman lamented the role of money in politics, referencing the Koch brothers’ recent pledge to spend nearly $900 million to elect conservative politicians, and riffed on major American corporations such as Coca-Cola and McDonald’s.

“Never has anyone bitten into a McDonald’s sandwich … (and said) ‘I’m lovin’ it,’” he said. “Those words have never been uttered.”

In a question-and-answer session after the talk, Offerman praised “Parks and Rec” star Amy Poehler as the funniest member of the show’s cast.

“It’s not really fair,” he said when asked to choose. “Her first seven characters would be funnier than each of the rest of us.”

He said he prefers live theater to other forms of performance for its immediate audience reaction and answered questions about his favorite sandwich and favorite hardwood — “croque madame” and “white oak, motherf——,” respectively.

Communication sophomore Ben Gauthier, who performed with improv group Mee-Ow as one of the night’s openers, said he most enjoyed the question-and-answer session.

“Him off-the-cuff was very fun to see,” Gauthier said. “The show was super fun … It was very exciting to open for Nick Offerman.”

“I thought the show was awesome,” she said. “It was weirdly educational.”