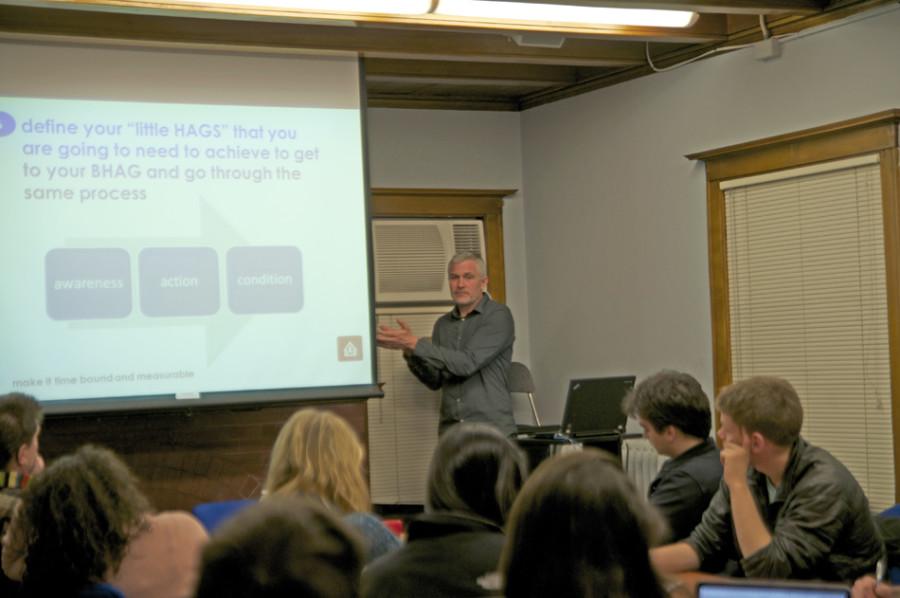 Greg Van Kirk, founder of Social Entrepreneur Corps and the co-creator of the MicroConsignment model for community development, spoke to more than 20 students and community members Thursday night at the Buffett Center.

The event was organized by Patrick Eccles, assistant director of the Global Engagement Studies Institute. He said Van Kirk visited Northwestern as part of the Buffett Institute’s Global Development Speaker Series to talk to students about social work abroad.

Van Kirk spoke about creating a social impact by offering the audience tips and advice on how to develop ideas of social change and put their plans into action.

Van Kirk touched on many of the problems people interested in social work encounter when developing an idea.

One of the problems, he said, is that people set goals that are too big and impossible to achieve by themselves and get frustrated. He suggested finding a balance and establishing smaller goals that can grow into bigger developments with time.

He said one thing debate over which causes are more important to champion can delay involvement.

He said the best way to start getting involved is by asking the right questions and identifying the problem and whether people really want or need a solution.

Another tip he gave the audience is to always maintain moral integrity.

“Strategies change, environments change, things are dynamic. You need to change tactics, you need to adapt,” he said. “But something needs to stay true. You need something that’s going to keep you.”

Van Kirk emphasized the importance of being a good leader by being humble.

He shared his own story of volunteering in Guatemala with the Peace Corps. He had been looking forward to being humbled and learning, but as he entered the village, people immediately looked for him for help because his business experience made him stand out.

SESP senior Alexis Gable said she worked with Van Kirk when she studied abroad in the Dominican Republic and worked with the organization he founded. She said one important thing he left out of his talk was the MicroConsignment model, which she worked with him on while abroad, she said.

“I was working with local women entrepreneurs in the (Dominican Republic) to sort of sell products and learn how to market those products to their communities,” she said. “I feel everything he’s talked about, he’s really tried to implement in his own organization.”