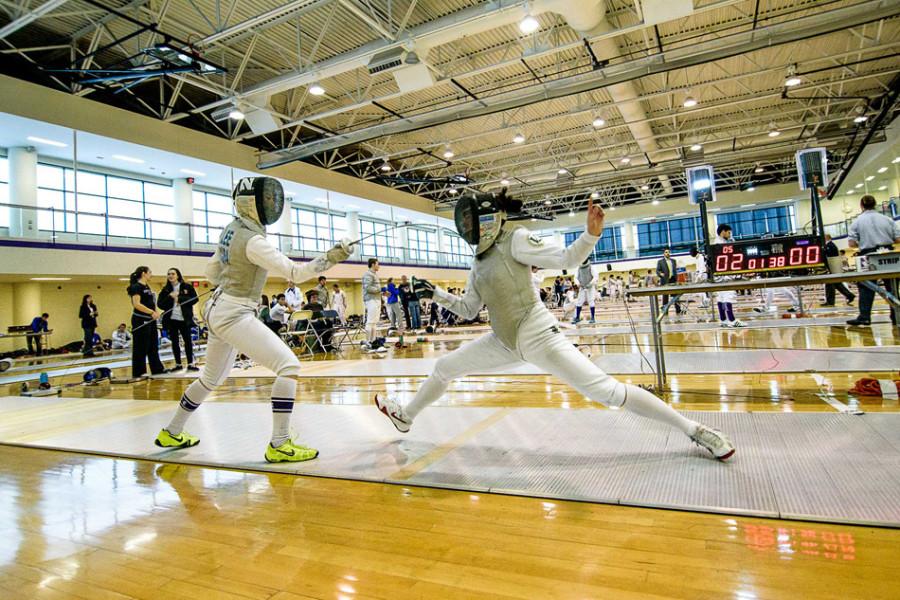 Michelle Lee lands a hit on a lunging opponent. The freshman contributed to Northwestern’s strong performance in the team’s latest duals meet.

The home gym meshed well with No. 9 Northwestern’s sensibilities, as the team beat two top-10 squads on the way to a 10-3 weekend in Evanston.

At NU Duals II in the Henry Crown Sports Pavilion, the Wildcats (36-7) once again faced a tough slate. The Cats faced off against five top-10 teams among 13 match ups, and came away with two wins against that powerful quintet.

Indeed, NU took care of all its non-ranked opponents and defeated No. 10 Temple on Sunday, along with No. 6 Penn the day before. The Cats couldn’t slay No. 5 Ohio State for a second time in as many weeks, falling 15-12. The other losses came at the hands of No. 1 Notre Dame, a respectable 17-10 showing, and No. 3 Princeton, a 22-5 trouncing.

Schiller wasn’t focusing on the losses, though, instead pointing to a key turnaround he saw from his squad against the Owls.

“Our sabre squad last week against Temple really kind of got in their own heads as Temple got on a roll,” Schiller said. “This week though, Temple was screaming at the referees, complaining, and we got into their heads.”

It was sabre that may have been the most compelling team for NU on the weekend. Sabre began slow on Saturday, netting just 3 of 16 points in NU’s opening match of the weekend against Stanford.

But as foil and epee stepped up for sabre in the early going, sabre came to fight as Saturday wore on.

“It was nice to work off of last weekend and use that momentum,” sophomore sabre Cindy Oh said. “It showed against Ohio State and Notre Dame where we had a really strong effort.”

Sabre won 5 of the team’s 12 points against Ohio State, including 2 from Oh. Against the Fighting Irish, sabre accrued half of the Cats’ 10 points, with a pair of victories each from sophomores Alisha Gomez-Shah and Julia Abelsky. NU closed the day with 7 points from sabre in a 16-11 victory over Farleigh Dickinson.

After a 4-2 first day, the Cats went 6-1 on Sunday, as epee, foil and sabre all showed mettle.

The only jarring result was the 22-5 defeat to the Tigers. Yet Schiller and Oh said they thought a few breaks would’ve made for a more competitive match.

“We definitely worked hard but there were four 5-4 losses from the sabre squad alone against Princeton,” Oh said. “It was tough not to close those out.”

The Midwest Fencing Conference Championships are less than three weeks away and for now the Cats have a single obsession: the Buckeyes.

“We’ve got a couple of weeks to recover and win some events,” Schiller said. “And we’ll be really almost solely focusing on Ohio State, as they’re our main challengers for the conference. It’s a championship we can win.”