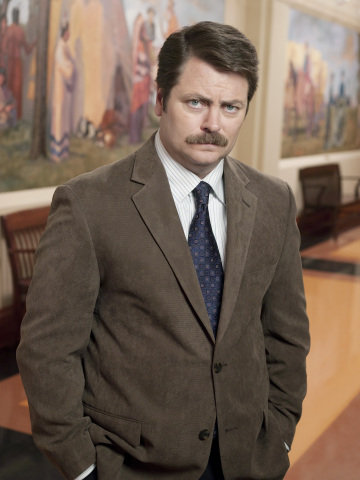 The performance will be followed by a question-and-answer session moderated by Offerman. Tickets will go on sale Tuesday at 10 a.m.

The comedian and actor is best known for his role as Ron Swanson on the NBC comedy “Parks and Recreation.” A native of Joliet, Ill., Offerman attended the University of Illinois at Urbana-Champaign. Offerman’s wife, actress Megan Mullally (Communication ’81), attended Northwestern.

“He did really well in the poll we sent out in the fall,” said Communication senior April Quioh, A&O director of speakers. “He’s been featured a lot in this season of ‘Parks’ and we’re excited to bring him in the prime of his Ron Swanson-ness.”

Quioh said Offerman was ranked in the top 10 of the 35 acts offered on the poll. His performance will be preceded by three student comedy performances.

“Obviously, we try to take into consideration availability and budget,” said Communication senior Emily Howell, co-director of marketing and media for A&O. “I would say that’s an outstanding poll result for an artist that we were able to book.”

Because “Parks and Recreation” wrapped up filming for its final season in December, Quioh said the speaker choice is timely.

“Northwestern students have expressed a real interest in ‘Parks and Rec,’ and since it’s the last season it’s an important time for us to do that,” she said. “We do the poll every year and every year ‘Parks and Rec’ is one of the top television shows they express interest in.”

The last comedian A&O brought to campus was “Workaholics” star Adam DeVine in April 2014. Tickets for last year’s winter speaker event, which featured actor James Franco, sold out within an hour and a half. Howell said the additional time between the announcement and ticket sale is intended to make the process go more smoothly.

“That’s giving a little more of a buffer for people to find out what’s going on,” she said. “Franco was a really unique situation for us. There were pros and cons to that, but we’re generally trying to keep things a bit more democratic I would say.”

Correction: An earlier version of this story misstated Emily Howell’s position. She is the co-director of marketing and media for A&O. The Daily regrets the error.