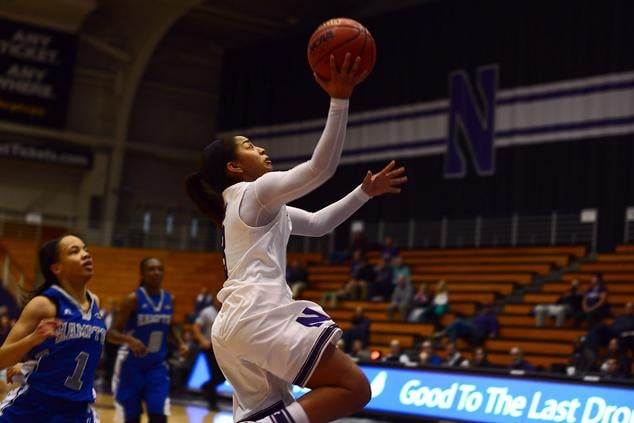 Ashley Deary goes in for the layup. The sophomore guard was the only Wildcats starter to not score in double-digits Sunday night, but her nine assists played a large role in Northwestern’s thriving offense.

After struggling defensively in recent close losses to Iowa and Penn State, the Wildcats (15-6, 5-5 Big Ten) found the cohesion they’ve been striving for, limiting the Golden Gophers (17-5, 6-4) to 29 percent shooting through a total team effort.

“After the loss to Iowa, we really wanted to come back and make a statement,” sophomore guard Christen Inman said. “One of the ways to make a statement was to stay together and play as one.”

NU began the first half with a tenacity that has been lacking in its last few games. In the opening 10 minutes of play, the Golden Gophers and the Cats traded possessions and points in a fast-paced contest.

Minnesota found itself with a 5-point lead seven minutes in, only to have the Cats come back. NU went on a 10-3 run over the next four minutes to put the score at 22-20 with 9:13 still to play in the first half.

The next five minutes were a battle of the defenses. Both teams went without a field goal until senior Alex Cohen nailed a jumper to end NU’s drought, and the Cats ended the half up 37-27.

“We came out really to play from the tip,” coach Joe McKeown said. “I think at halftime we really felt good about the way we were playing.”

The game hit a slight hitch when the ceiling of Welsh-Ryan started to leak onto the court, but it wasn’t anything some vigorous floor mopping couldn’t fix. NU didn’t let the delay of game impact its play and started the second half dominating as it had at the end of the first.

A key for the contest was NU forcing Minnesota into mistakes, as the Golden Gophers committed 22 turnovers to the Cats’ 11. Consequently, NU outscored Minnesota 15-3 on fast break points.

“One of our game plan goals was to double, and we did very well with that,” sophomore Nia Coffey said. “That led to a lot of turnovers and a lot of fast break points for us.”

This manifested itself early in the second period, when four Minnesota turnovers in the first four minutes of the half afforded NU a 6-0 run and an 18-point lead.

Despite renewed pressure, NU continued to smother the Golden Gophers, never letting Minnesota come closer than 13. McKeown started subbing in the bench around the two-minute mark, and NU dribbled the ball out to cruise to a 21-point victory.

The 70-49 loss was Minnesota’s largest defeat this season, the next worst being a 17-point loss to Vanderbilt in November.

The Cats dominated in all aspects of Sunday’s game, as NU shot better than the Golden Gophers and handled the ball with greater care.

NU also benefited from a balanced offense. Coffey earned a double-double with 12 points and 12 rebounds. Junior Maggie Lyon and Cohen had 16 and 14 points respectively, while Inman notched a season-high 20.

“I was really just trying to stick to our game plan and stay aggressive,” Inman said. “I figured out what they weren’t guarding and what was working for me, so once I figured that out it was really easy for me to exploit their weaknesses.”

More than anything else, the Cats found their groove, playing effectively as a unit both offensively and defensively.

“Once we were getting stops, once we were D-ing up and rebounding, it just led to our offense running smoothly,” Coffey said.