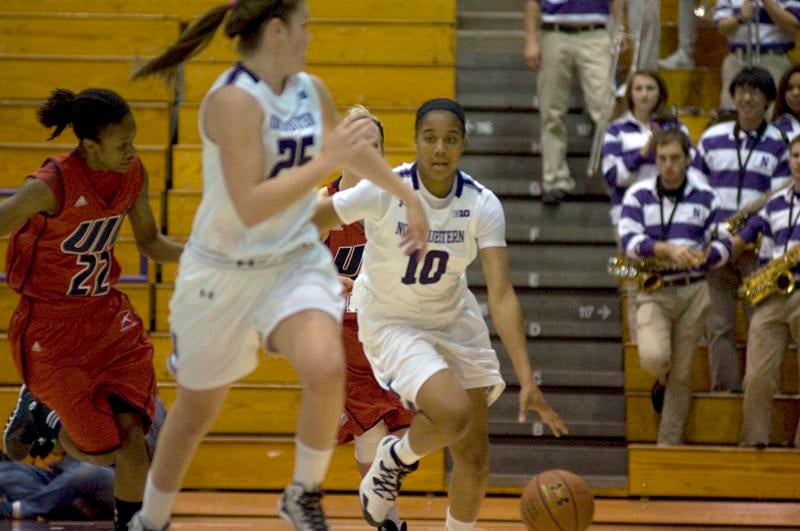 Nia Coffey raced ahead of all her teammates in Northwestern’s victory over Hofstra on Wednesday. The freshman forward scored a game-high 27 points.

Northwestern looks to return to its winning ways of old on Sunday against Minnesota after the team lost a defense-optional game versus Iowa 102-99 on Thursday.

The Wildcats (14-6, 4-5 Big Ten) are on their second two-game losing streak of the season and have lost five of their last seven contests heading into a home matchup against the Golden Gophers (17-4, 6-3). After a 2-0 start in conference play, the Cats have been unable to keep up their early season success and have dropped to eighth in the Big Ten.

“This just gives a chance to come back,” sophomore forward Nia Coffey said. “To play as Northwestern, as we play. We have plenty of games to come back and we are a great team. So we’re just shaking it off for the rest of the season.”

Although it came in a losing effort, Coffey helped show the rest of the team how to rebound from a tough stretch. She shot a measly 23-of-82 from the field during the six games before Thursday, including a 4-of-22 performance in NU’s first contest against Iowa. In the rematch however, Coffey tallied a career-high 35 points on 12-of-19 shooting. She was one of the key factors in the Cats outscoring the Hawkeyes 44-18 in the paint.

If Coffey can feed off this amazing performance, NU should be in good position for a win against Minnesota. The Golden Gophers are not as deadly from the outside as the Hawkeyes, so 3-pointers will most likely not save Minnesota as they did for Iowa. Minnesota is shooting just 31.1 percent from beyond the arc for the season compared to the 40.3 percent Iowa rate.

The Golden Gophers have been able to put up points this season, though. They are fourth in the Big Ten at 76.0 points per game and have scored at least 70 points in eight of their last 11 contests. But if the Cats can defend the paint and force their opponent to shoot jump shots, the normally sturdy Minnesota offense may become a bit shaky.

On the other side of the ball, NU will have its chances from all spots on the court. Despite having the third-best defensive field goal percentage in the Big Ten, Minnesota is 11th in defensive scoring, allowing 66.5 points per game. Along with that, the team is in the middle of the pack in 3-point defense, letting teams shoot 30.6 percent from deep. This means the Cats, coming off a 13-of-18 performance from behind the arc, may have a chance to shoot the Golden Gophers out of this game.

The Cats cannot afford to fall behind early again. In the last two defeats — to Penn State and Iowa — the Cats lost the first halves by a combined 22 points. The team would finish those games strong, but it would not be enough in either contest.  A robust start on Sunday may be all NU needs to end this losing streak.

“No matter what happens, we can fight hard,” sophomore guard Ashley Deary said. “The key is not to get down in the first half and just fight hard from the beginning and play the full 40 minutes out.”