Women’s Swimming: Northwestern working out kinks ahead of Big Tens 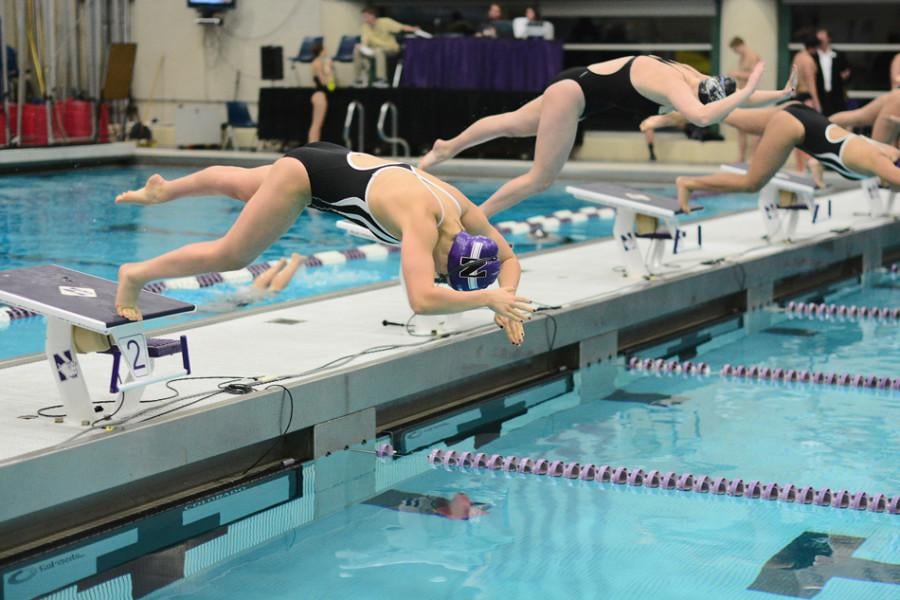 Northwestern launches into the pool. The Wildcats are coming off a stellar victory against a ranked Iowa squad, and the team doesn’t plan to regress as it focuses on the upcoming Big Ten Championships.

Coming off a recent and convincing victory over a ranked Iowa squad, Northwestern is excited about its two-day competition this weekend against Minnesota and Purdue.

“We won against Iowa which was really great and we want to continue that energy over into this weekend,” sophomore Katie Branch said. “We know we’re not going to win against Minnesota, because they are ranked pretty high, but we can still go and put up a good fight.”

The Wildcats will travel to Minneapolis, Minnesota, for the Friday and Saturday meet, and indeed the Golden Gophers (6-1, 2-0 Big Ten) are ranked high, as they currently sit at No. 19 in the country.

The Cats (7-4, 2-2) have a little more confidence facing No. 16 Purdue (4-2, 1-2) this weekend — despite the Boilermakers’ higher ranking. Senior Madeleine Klichowski noted that the swimmers will approach every competition with the same mindset and equal determination.

Despite the perceived difficult competition, coach Jimmy Tierney believes the meet has multiple opportunities for the Cats to score points and will be good preparation for future events.

“Minnesota’s one of the best teams in the Big Ten, Purdue’s certainly in the top half,” Tierney said. “More than anything, it’s putting our girls in a position to race well and get some confidence up for Big Ten (Championships).”

Focus on Big Tens is probably the right tactic, especially with Tierney not expecting to bring any divers on the road for the second straight trip for recovery reasons, burying the Cats in a 32-point hole in the process.

NU beat the Hawkeyes in spite of that same circumstance last week, but the Cats needed a season-best performance to do so.

Although the Cats are less focused on victory, that doesn’t mean the team is willing to settle for mediocrity in Minneapolis.

“We want to perfect all the little things that we’ve been working on this season,” Klichowski said. “Everything has been coming together for us really well as a team, so this is the last chance to touch up things before Big Tens.”

This meet will also help to determine final standings and positions for the races during Big Tens. Tierney noted the elevated level of competition for NU, especially during this past month, and that spots are still open for swimmers in the 800- and 400-relay teams.

“Hopefully if somebody is a little bit off, it’s not going to do anything to shake their confidence because one meet shouldn’t dictate your whole approach and attitude,” Tierney said. “People still need to show us how bad they want to be on those relays.”

Ultimately this upcoming meet is meant to serve as a final springboard for both skills and morale. The Cats are hoping an impressive showing this weekend will bode well for a strong finish.

“I think that the team is stoked,” Klichowski said. “We are so excited going into these last three weeks of the season and just want to go and compete, and we’re starting to feel a lot better in the water. I think that every race is just an opportunity to prove our dominance.”