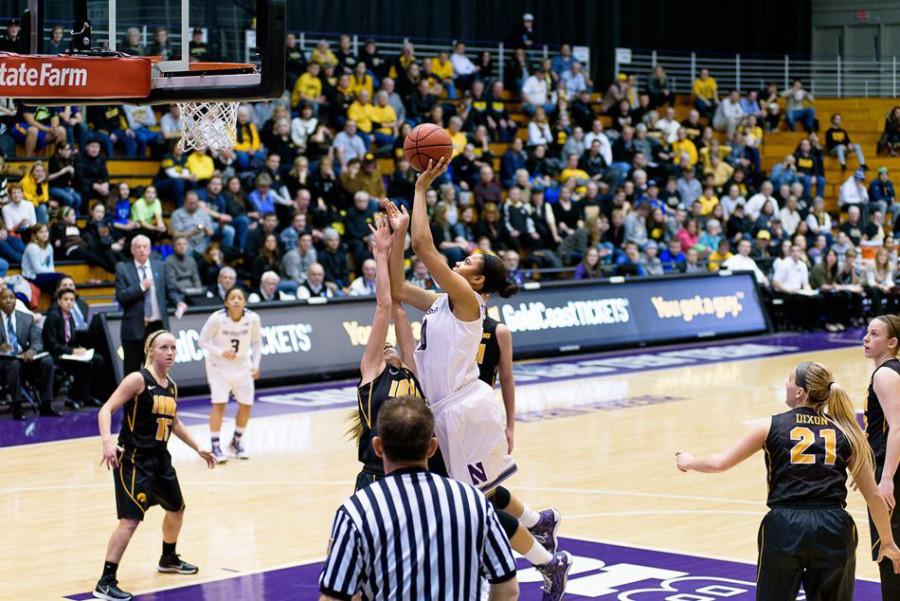 Northwestern and Iowa had an offensive display for the ages Thursday night, combining for 201 points and 32 3-pointers on nearly 70 percent shooting from beyond the arc. Sophomore forward Nia Coffey led the Cats with a career-high 35 points on 63 percent shooting.

Northwestern suffered another brutal defeat Thursday night, this time at the hands of No. 20 Iowa in a 102-99 home loss after the Wildcats clawed back from a 23-point deficit.

Sophomore forward Nia Coffey tallied a career-high 35 points and also tacked on eight rebounds, despite playing in foul trouble for most of the second half. Sophomore guard Ashley Deary also scored a career high, earning 22 points while going 5-of-5 from 3-point range. Junior guard Maggie Lyon finished with 20 points.

Yet, despite this mesmerizing offensive showing, NU was unable to stop Iowa’s nearly unbelievable first-half shooting.

“It was a crazy game,” coach Joe McKeown said. “I don’t ever remember giving up 100 points in 30-something years and I’ve coached a lot of good games.”

The Hawkeyes began the contest by hitting four 3-pointers, acquiring a 12-4 lead just 3:23 into the game. Iowa continued to sink 3s while NU steadily began to chip away at the deficit.

With the Hawkeyes leading 23-15 with 13 minutes left in the first half, Coffey lit up, leading her team on a 15-6 run in just over four minutes to take the lead. Coffey scored a whopping 18 of NU’s first 30 points as the home team led 30-29 with about eight minutes remaining in the opening period.

Then, Iowa began to seriously attack. The Hawkeyes drained trey after trey, going on a 29-11 run to end the half with a lead of 58-41.

Iowa shot 73.7 percent from downtown in the first half, sinking 14 3-pointers out of 19 attempts. NU, in comparison, went 4-of-6 on such plays. Iowa was on fire from the field as well, shooting 64.3 percent from the paint compared to the Cats’ 42.4 percent.

Melissa Dixon spearheaded the Iowa offense, finishing with 21 points from seven 3-pointers in the opening half.

“In the first 20 minutes (Nixon) went 7-of-8 from the 3-point line, and that can’t happen,” McKeown said. “We can’t have those kinds of breakdowns and wait until halftime to make an adjustment.”

The second-half began how the last one ended, with Iowa hitting four more triples in the first three-and-a-half minutes.

Down an intimidating 23 points, NU launched a counter attack. Led by Deary, Lyon and Coffey, the Cats methodically began to whittle down the Hawkeyes’ lead, nailing 3s, layups and jumpers while playing with obvious defensive tenacity. At one point, the Cats went on a 14-0 run.

With just 3:21 to go, the home team found itself within 4 points of its Big Ten foe.

“I think a lot of it was just pride,” Deary said about the renewed attack.

McKeown credits the comeback to energy and better defense.

“I loved our fight in the second half,” he said. “We just found Dixon. Somehow we lost her the first 20 minutes of the game. And then somehow we found her.”

Iowa surged ahead to an 8 point lead with under a minute left, but triples by both Lyon and Coffey put the Cats within 4. After a layup put the Hawkeyes in front by 6, Coffey sunk a a 3-pointer with just 2.6 seconds on the clock.

The Cats were unable to regain possession before time ran out, and went on to narrowly lose to the Hawkeyes 102-99.