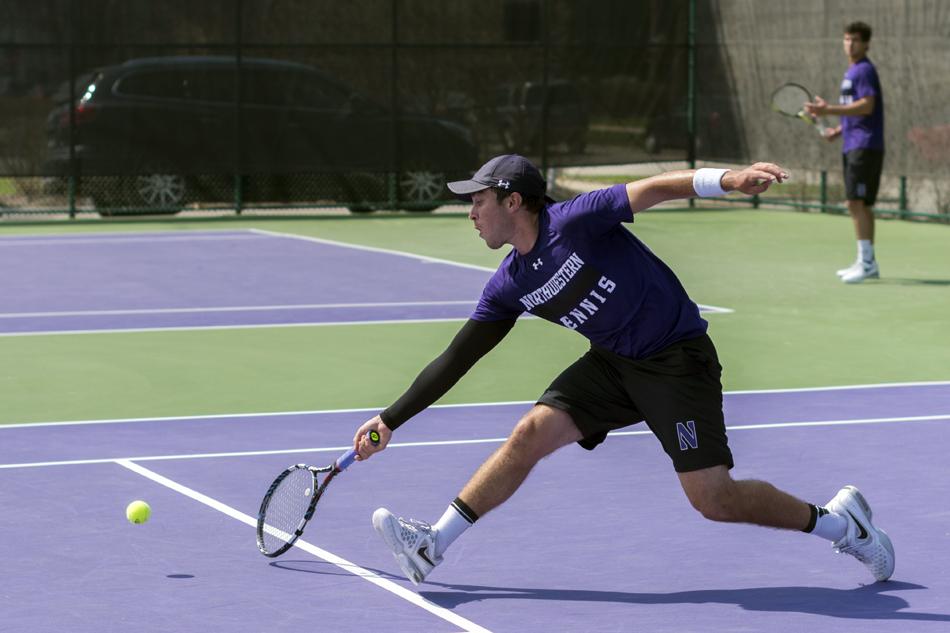 Though Northwestern’s team season is over, senior Raleigh Smith’s career continues this week at the NCAA Singles Championships. The 64-person tournament begins Thursday.

Northwestern has a lot on its plate this weekend, as the team heads to Notre Dame, Indiana, to play No. 14 Notre Dame on Friday before hosting its home opener with a doubleheader against No. 11 Duke and Illinois-Chicago on Sunday.

The No. 30 Wildcats (2-2) say they aren’t afraid of facing more high-ranking competition. Three of NU’s last four opponents have been top 30 squads, and the team has been able to pick up a couple hard-earned wins while staying close in its two defeats.

“Progress has been good so far this season,” coach Arvid Swan said. “We’ve still got a long ways to go, but I still feel good about the direction we’re going.”

Specifically, the Cats are excited to finally be playing at home. NU will finish up its five-game road trip at Notre Dame (2-1) and finally start a six-game home stand this weekend. For many of the players, competing at home gives them added confidence and energy going into a game.

“We don’t want anybody coming here and beating us at our place,” junior Fedor Baev said. “This is our house, and they’re coming here. And they’re going to get a beating.”

But some players are just happy not to be on the road. When asked if he was excited to play at home, sophomore Sam Shropshire said it is “nice to sleep in your own bed.”

NU will have to be on its game against a Duke lineup that is firing on all cylinders. The Blue Devils are 4-0 this season, and are coming off of a commanding 4-0 victory against then-No. 23 Memphis. Nicolas Alvarez is the No. 18 singles player in the nation, and spearheads a team that has only lost three sets so far this season.

The Flames (1-3) bring up the tail end of NU’s doubleheader. Swan and the Cats have been emphasizing conditioning all season, and they say they feel confident handling both teams.

“We’re fitness-wise fine to do it, so it’s not really a difference in preparation,” Swan said. “We just have to make sure in between matches that we take care of our bodies.”

NU has to make sure it does not underestimate UIC, whose only win so far this season was against lowly Wisconsin-Whitewater. Playing an unranked, local team in the second game of a doubleheader can be a recipe for a shocking result if the Cats are not careful. But they seem cognizant of the upset potential.

“Definitely, (underestimating our opponent) is a big thing that can happen,” Shropshire said. “Oklahoma was doing that a little bit with us, so we definitely have to be ready, focused and be ready for the match.”