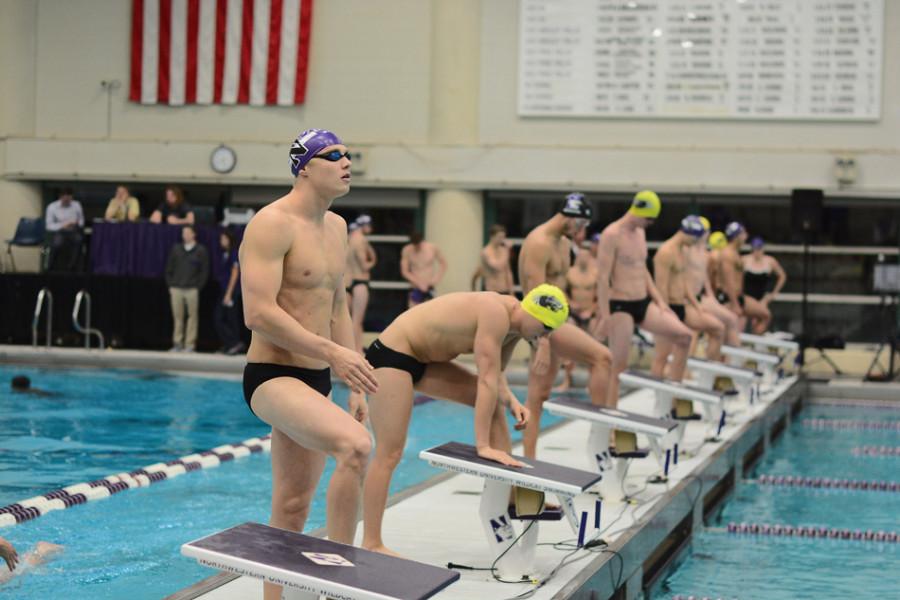 Northwestern lines up for a race against University of Wisconsin-Milwaukee. The Wildcats have lost all three of their meets against ranked competition this season.

Northwestern fell to the No. 19 Iowa Hawkeyes 171-129 while on the road this weekend. The Wildcats are now 7-4 in dual meet competitions.

NU fell behind early when its relay team was disqualified due to a false start. The penalty cost NU 9 points, which swung in favor of Iowa, ultimately allowing for a quick 18-point deficit.

“We lost a heartbreaker there,” coach Jarod Schroeder said. “We had a relay guy jump early by 0.01 of a second. If it would have been a judgment call, I don’t think it would’ve been seen by the officials. But they used an electronic relay platform, and it caught it. We should’ve been disqualified for it, but we needed something special to happen to win the meet, and (a win there) was that something we needed that was special.”

Schroeder highlighted the performances of swimmers in the freestyle and diving events. Unfortunately, another heartbreaking relay loss occurred during the last event, when NU was out-touched by 0.02 of a second in the 400-yard freestyle relay.

Freshman Almog Olshstein and sophomore Andy Jovanovic placed first and second respectively in the 100-yard freestyle event. The two wins reduced the gap with Iowa to only 5 points after coming out of the halfway break down 81-69.

“Jordan last year and this past summer has really put himself in a position where he is really one of the premier distance swimmers in the country,” Schroeder said. “Going into Big Tens, he’s going to be one of the favorites. He’s just a model for consistency and he’s been somebody we’ve relied on over the last three years. At Big Tens, I think he is going to be in the hunt for a Big Ten title.”

Wilimovsky admits he wasn’t as impressed with his performance.

“My times were a little slower than I wanted to go,” he said, “but I was glad to try to help the team.”

NU beat Iowa last year by only 2 points and was definitely looking for an upset match this year, too. Despite the loss, the team can still draw positives from the experience.

“Certainly the loss against Iowa was tough,” junior captain Van Donkersgoed said. “However, it was an atmosphere that we had never really experienced before. We’ve never really come together like that. We fought really, really hard. Everyone’s effort was definitely there.”

With many races against Iowa coming down to the touch, Wilimovsky said he feels the effort put in by the team was not reflected in the large margin of victory.

“We got a lot of seconds, and they had a little more depth than us,” he said. “So I don’t think the score really reflected how close the meet was.”

With only one meet left before Big Tens, the Cats are excited for the competitions ahead.

“The final score looked more lopsided than the meet actually was, and in terms of our guys stepping up, most of our guys did that,” Schroeder said. “It didn’t come out the way that we had planned, but that takes nothing away from my guys. We swam the fastest we have all season long. Iowa is 19th for a reason, and they proved that against us.”

This weekend NU will be on the road against Minnesota and Purdue in Minneapolis for a two-day competition and their last regular meet of the season before Big Tens in late February.