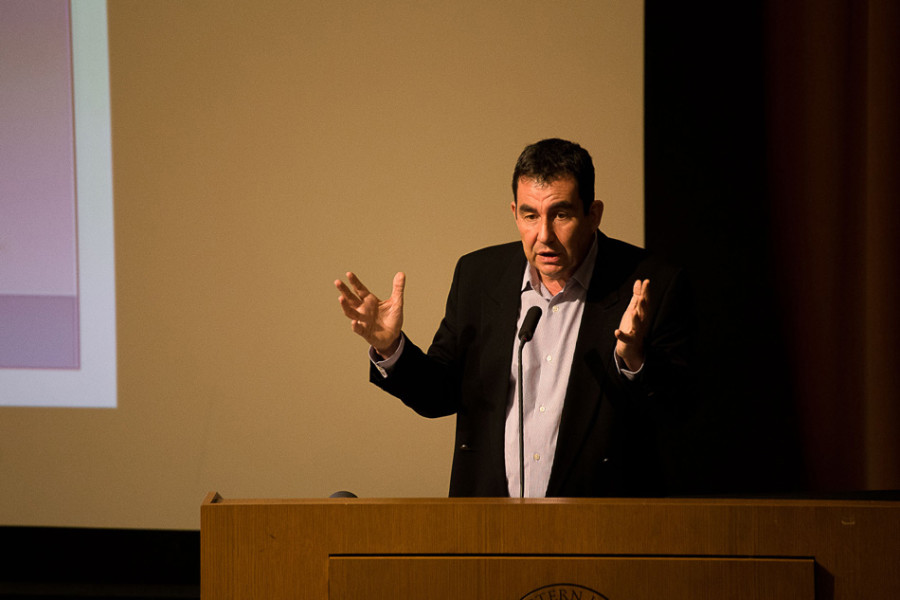 Israeli writer and journalist Ari Shavit spoke on contemporary Israel on Monday at an event hosted by Northwestern Hillel.

The event was part of Shavit’s tour across U.S. universities discussing his recent book, “My Promised Land: The Triumph and Tragedy of Israel,” said Michael Simon, executive director of NU Hillel. Shavit, a columnist for Haaretz, Israel’s leading and oldest newspaper, and a New York Times best-selling author, discussed Israeli history and the Israeli-Palestinian conflict in Ryan Auditorium. More than 300 faculty and students attended the event.

“(He) doesn’t pull punches when it comes to presenting mistakes Israel has made and challenges that it faces,” Simon told The Daily.

Shavit began his talk by expressing his desire to “have a conversation,” and discussed the history of Israel and 19th century Zionism through the perspective of his own ancestors. He emphasized the need for evaluating the context for the many tragedies marring the history on both sides of the conflict.

“There was no evil side or righteous victims,” he said.

Shavit praised the accomplishments of Israel of the 1950s, highlighting its ability to integrate immigrants and refugees.

“What you see is a people that have come from (conflict) and are threatened by that, but have chosen life,” Shavit said. “Israel is such an inspiring celebration of life.”

Shavit discussed unique circumstances Israel faces, highlighting the flaw in viewing Israeli democracy in parallel to that of the U.S. While critical of Israeli settlements in Palestine, he said it is wrong to judge them without context.

“Israel does not only have a unique occupation that other democracies don’t have,” Shavit said. “Israel is also under intimidation. You have many problems here in America. But no one doubts if America will be here in 20 years time.”

Following his talk, Shavit answered questions from the audience, ranging from his views on Israeli President Benjamin Netanyahu and the peace talks of the past year to the relationship between American Jews and Israel. He finished his talk by mentioning his admiration for the Americans he encountered during his tour.

“You don’t have to be Jewish to care,” he said. “It’s up to us. It’s up to all of us. The most important people in this great struggle are you young people and this is why I was so inspired by listening to all of you.”

The event follows a recent campaign, NU Divest, that calls for the University to divest from six corporations involved in the occupation of Palestinian land, and an event, Palestine 101, hosted by Students for Justice in Palestine that aimed to provide students a history of the area.

Weinberg junior Ariella Hoffman-Peterson, a Hillel member who organized the event, said Shavit’s visit has been anticipated since the last academic year.

“This is a very interesting time for us to hear his narrative and his push for something better for both people, so I’m actually quite happy we have this overlap,” she told The Daily.