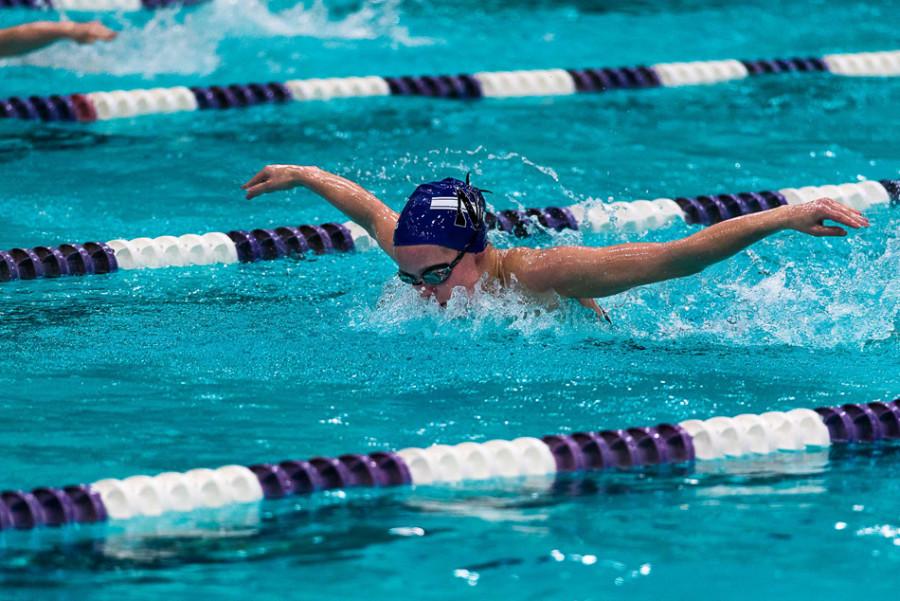 The Wildcats dominated in the pool on Saturday, defeating No. 21 Iowa 152-142 despite a 32-point hole due to forfeiture of the diving events. Northwestern came back in the final leg of both relay races, securing the victory in the process.

Spotting a ranked team a significant lead generally isn’t a formula for success, but apparently Northwestern can have it all.

The Wildcats defeated No. 21 Iowa 152-142 on the road Saturday, despite a 32-point hole brought on by forfeit in the diving events — all three of the team’s divers were injured or ill and could not compete.

“I’m real proud of the girls and how they responded,” coach Jimmy Tierney said. “It’s hard to make up that kind of gap, but the coaches prepared them and they thought they could do it. It was thrilling.”

NU fell behind in the opening 200-yard medley relay by nearly half a second, but a strong anchor lap from freshman Mary Warren netted first place for the Cats’ top relay team, and 11 of the event’s 17 points, by six one-hundredths of a second.

“Everybody on the team knows that the first relay is really important,” Warren said. “We have been practicing on it, all of our exchanges, all of the things that go into it, and we just went out there and did it.”

NU proceeded to capture first in two of the next three events, and suddenly the Cats had made up 18 of those 32 points. The Hawkeyes fought back by 9 points with a strong showing in the 100 breaststroke, but NU barreled down and charged forward.

None of this was surprising to Tierney, who was marking the proceedings out on a sheet and said the score was exactly what he had expected at that moment.

The key was to make sure the team took a majority of points in the events they were strongest, and to limit the damage in Iowa’s best races. The Cats executed that plan to perfection early on, with a number of resounding victories in favorable events, and a narrow 10-9 loss in the 1000-yard freestyle, one of Iowa’s strongest events.

“I think they felt they were a better swimming team,” Tierney said. “The attitude from the get go was ‘Let’s try to take charge of this meet, and start winning events, and many as we can.’ We knew where their strengths were.”

Tierney pointed to the work of the freshmen as especially important in the meet’s success. Warren’s final leg in the opening event was a tone setter, and her victory in the 50-yard freestyle wasn’t too shabby either. Anna Keane and Aja Malone contributed key depth points in early races. Older swimmers played a role too, as sophomores Ellen Stello, Lacey Locke and Annika Winsnes each won an event.

But the Cats still needed to carry their first half momentum through the entirety of the meet.

NU didn’t let up, sticking to the blueprint that had allowed it to come back so quickly in the first place. The team actually held a 139-138 lead going into the final event of the meet: the 400-yard freestyle relay.

“I was a bit nervous before the final event,” said Winsnes, the anchor for the Cats in the final event. “But I had confidence that we were going to win the relay.”

Once again, the Cats fell behind in the relay, and were down 0.53 seconds heading into the last leg. And once again, the anchor flourished, with Winsnes obliterating her Iowa competition by nearly three seconds on the way to a first place finish that was the difference in the meet.

Warren felt that the showing was the Cats’ best this season, although she iterated that the team can improve a lot.

Still, Big Ten Championships are less than a month away, and the measure of belief from this performance can’t be underestimated.

“We take a lot of confidence from this for sure because Iowa is a ranked team that we were able to beat, especially that we did so without the divers,” Wisnes said. “Now we’re going up to Big Tens in a few weeks with an extra amount of belief.”