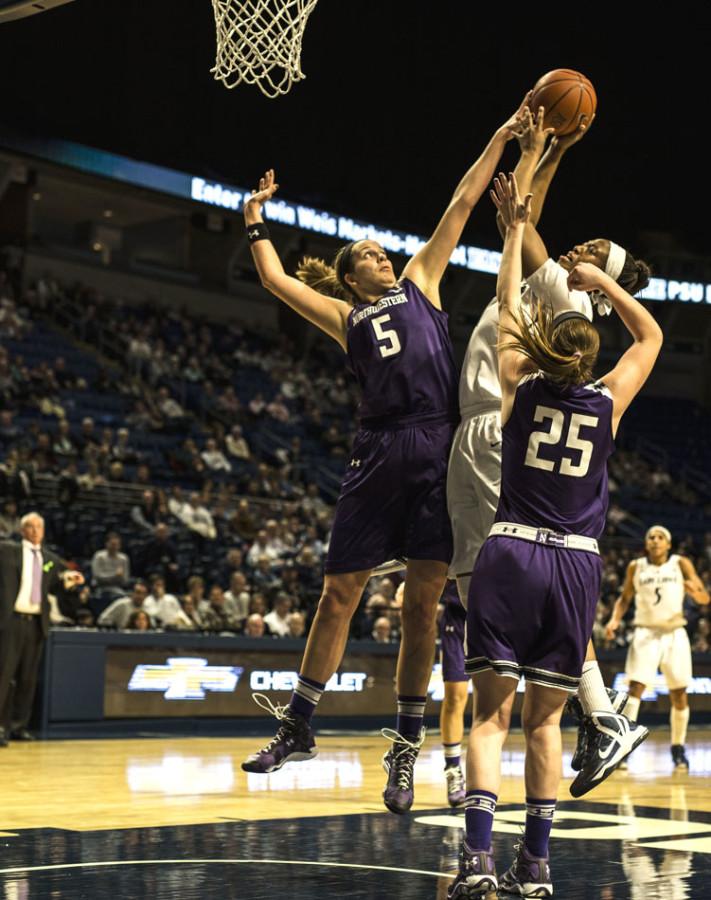 Alex Cohen goes for the block. The senior center fouled out late in the second half, allowing Penn State key rebounding chances against Northwestern’s four-guard lineup.

The Wildcats were playing their second consecutive contest on the road and without junior Lauren Douglas, and those matters appeared to catch up with them. NU was unable to take care of business against a team tied for the worst record in the Big Ten, and it had coach Joe McKeown praising the conference’s parity.

“We have to move forward,” McKeown said. “Everybody’s good (in the Big Ten), teams 1 through 14. I think anybody can beat anyone on any given night. I can’t speak for their record because when they walk onto the court, there are a lot of good players.”

NU was forced to rely on its thin bench with Douglas sidelined, and when fouls started to pile up on the Cats, it opened the door for the home team.

After taking a 15-8 lead, NU allowed Penn State to go on a 23-8 run that boosted the confidence of the Nittany Lions.

The normally stout defense of the Cats did not show up in the first half, as they allowed Penn State to put up 41 points. The Nittany Lions shot 51.7 percent from the field in the first half and also had 24 points in the paint in taking a 5-point lead.

The Cats came out stronger in the second half, but the Nittany Lions had an answer for everything NU did. Thanks to fast break buckets and a tremendous amount of help from its bench, Penn State held a 58-50 lead with 12:27 remaining.

“We just did a terrible job in transition defense the whole game,” McKeown said.

Despite allowing 17 fast break points, NU would not let Penn State pull away. The Cats would take a 63-62 lead with nine minutes left, but the lack of depth would be too much for them to overcome.

With 5:35 remaining, sophomore Nia Coffey fouled out of the game. Coffey was the Cats’ leading rebounder for the game with 11 boards, and without her on the court late, the Nittany Lions were able to capitalize on the glass — a deciding factor.

“We didn’t block out and rebound in the last three minutes,” McKeown said. “That was the difference.”

With a four-guard lineup following center Alex Cohen’s fouling out, NU allowed Penn State to get two offensive rebounds in the final minute when the Cats trailed by two. NU was able to force a steal after the second offensive board and sophomore Christen Inman hit the game tying layup.

On the next possession, freshman Lydia Rohde was called for a foul after Penn State got another offensive rebound.

Penn State knocked down one of two free throws to take a 1-point lead with 10 seconds left. NU moved quickly from there, but Rohde missed a shot with two seconds remaining to end the game.

“We just wanted to get up the floor, and let Ashley (Deary) make a play which she did,” McKeown said. “And I thought we got a pretty good shot.”

Junior Maggie Lyon was a small bright spot in the disappointing loss as she totaled 20 points and seven rebounds in the contest. Thanks to her fantastic scoring effort, Lyon was able to eclipse 1,000 points on her career, but she was unable to fully enjoy the accomplishment.

“It’s exciting,” Lyon said. “It’s pretty cool, but it doesn’t really matter to me if we don’t win.”