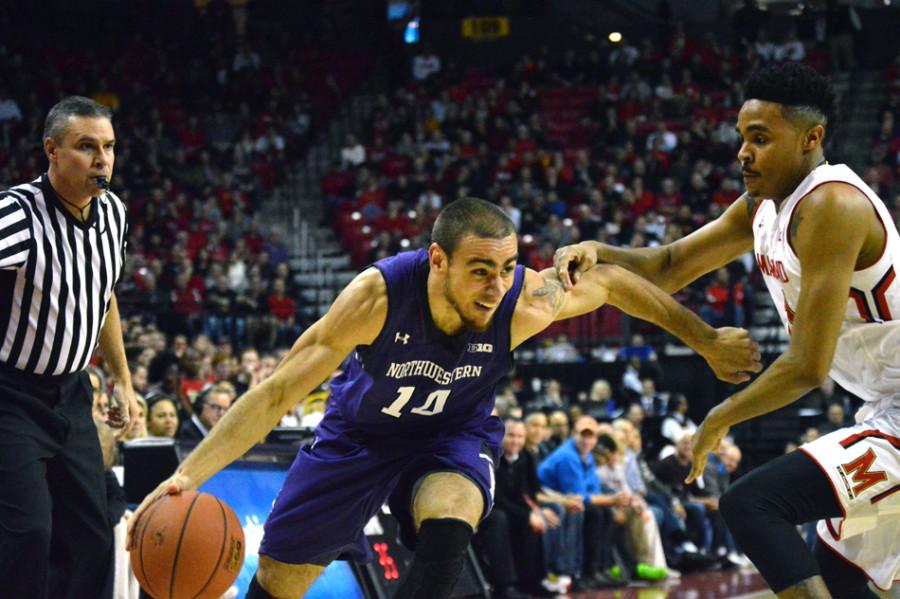 Northwestern suffered another brutal loss, this time a 1-point defeat at the hands of No. 13 Maryland. Junior guard Tre Demps hit a clutch jumper with less than 10 seconds left to give NU the lead, but the Terrapins followed with their own basket to seal the win.

COLLEGE PARK, Md. – It was all too familiar.

The Terrapins took their first lead of the game with 20.6 seconds left after two free throws from guard Melo Trimble. Junior guard Tre Demps responded with a step back jumper to put the Cats up by 1. On the other end, Trimble missed a 3-pointer, but forward Dez Wells got the rebound and the putback to seal the game for the Terrapins.

“It’s been a tough couple of weeks, but that’s part of basketball,” coach Chris Collins said. “You can say ‘we should have done this’ or ‘we should have won these games,’ but we’re not. You have to finish the deal, especially in this league when you’re playing really good teams.”

NU came out firing in the first half, shooting nearly 70 percent from the field and hitting seven 3-pointers. The Cats ended the first half leading 41-30 and kept all of Maryland’s players from scoring in double figures. Freshman guard Bryant McIntosh led all scorers in the first half with 13 points.

The second half was a completely different story.

The Cats struggled to get into an offensive rhythm and Maryland was able to cut into NU’s lead. The Cats shot 40 percent from the field and only 12.5 percent from behind the arc for the final half. NU struggled throughout the game to hold onto the ball, turning it over 17 times.

“I thought we played a great basketball game, but the turnovers did us in,” Collins said. “I thought we were a little sloppy the whole night with the ball.”

The Cats also could not contain Trimble in the second half, when he scored 19 of his 27 points. Wells added 17 points for the game.

NU was up 11 points with less than four minutes remaining and seemed ready to break its conference malaise. That was until the sloppy play — turnovers, more late missed layups — allowed the Terrapins an avenue to fight back.

Maryland crawled closer and had the game down to 1 point when McIntosh went to the line for a one-and-one with less than 30 seconds remaining.

McIntosh finished with a team-high 21 points, but he missed the front end of the one-and-one and left the Cats vulnerable at a 1-point lead.

Soon after, NU had lost, once again losing its composure down the stretch.

“We got to find a way to have some poise at the end of games and execute and finish games,” McIntosh said. “That’s what good teams do. Right now we’re playing 37 really good minutes, and we kind of let it go the last three minutes.”

Sophomore forward Sanjay Lumpkin chipped in 12 points and junior center Alex Olah added 8 points. The Cats have now lost their last five games by a margin of 3.4 points, proving they can stand tall against almost any Big Ten squad, except with a dearth of victories to show for it.

Collins said the team needs to learn how to win.

“I take that personally because it’s my job as a coach to teach these guys the way to win the last couple of minutes,” Collins said. “When we break through, I think it can lead to a lot more wins because I think our team has proven that we can play with any team in this league. We’re just not getting the results, and that’s what’s frustrating.”